Chicago Tap Theatre’s brand of foreign policy did more for U. S. international relations  in its one night at the Athenaeum Theater Saturday than the U.S. State Department has accomplished in the past two months. If only they knew!

Chanting, “Barcelona, Toulouse, and Chicago!” in rhythmic concert with tapping feet on a sand surface, dancers from France’s Compaignie Tappage and Tap Olé from Spain  joined CTT on stage for Guillem Alonso's "Wipe Your Feet" in a rousing introduction to CTT’s “Liaison,” a partnership established in 2004, and now in its third installation.

For their closer, CTT Artistic Director Mark Yonally and Musical Director Kurt Schweitz had assigned each company specific choreographic segments and music for the re-imagining of Yonally’s “Somebody to Love,” set to the music of Queen, from CTT’s “We Will Tap You” (2016). All three segments came together for the first time, to joyful results, in the finale of Saturday’s performance.

In between the eminently entertaining opening and closing full-cast works, a happy sampler of sixteen tap dance numbers showcased both the unique spin each company brings to the art of tap, and multi-company artistic partnering. Fully seven of the sixteen numbers on the program featured a blend of dancers from at least two of the companies. As with all CTT productions, “Liaison” was the lucky beneficiary of Schweitz’s arrangements and original compositions, performed live by a  jazz combo, prominently visible from a raised platform upstage of the dance floor.

As an experiment in multi-company collaborations, “Liaisons” goes a long way toward fostering good will across the globe, bringing the benefits of cultural diversity and artistic cross-pollination to its audiences in each company’s native country. (“Liaisons” will tour to France and Spain in the Fall of 2017.) The outcome of their efforts, however noble, is a varied mix of artistic achievement, with some numbers knocking our socks off and others just marking time, so to speak.

Yonally’s two works choreographed for and beautifully performed by Chicago Tap Theatre attest to his innovative use of the tap dance medium. In “Beats Antique,” each of four solo dancers creates a movement partnership with a different solo musical instrument, each performed in a separate column of light. Movement dynamics and rhythmic design complement and correspond to the musical line. When two or more instruments take stage together, so, too, do the dancers, crossing both spatial and auditory boundaries in a visualization of musical harmonies and patterns. Yonally’s musical sensibilities are further on display in “Moonlight,” his lyrical love letter to Beethoven. Full-body dancing combines breathy suspensions and sublimely delicate tapped syncopations.

Tap Olé’s “Candilejas,” is a sweet dream of a dance choreographed and performed by the beguiling Guillem Alonso with Spanish guitarist Mario Mas. Alonso dances with his entire body, head, core, and extremities channeling an understated passion into the sounds emanating from his feet. The auditory aspect of his tapping is a by-product of the dancing, not its goal. Restraint and attenuated pauses only served to emphasize his incredibly clear tap articulations and technical virtuosity. The subtle interplay of dancer and musician created a delightful build, ending with Alonso playfully plucking the very last note on the strings of Mas’s guitar. 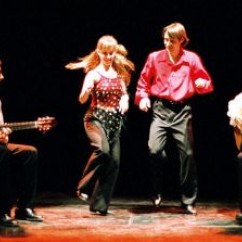 Tap Olé’s Roser Font ignited tap dance fireworks with her jazz solo, “Rumba,”  a blend of jazzy tap dance riffs and Flamenco-style rhythms. Her tap dance pyrotechnics sky-rocketed with super-energized enthusiasm and astounding technique. Her ultimate high note was an improvised  “Q & A” with the drummer that ran rough-shod over conventional tap dance one-upsmanship. This is a body that never quits. The love for life that pours out of this tiny spit-fire of a dancer lit up the stage throughout the evening.

Valérie Lussac’s strongest choreography for Tappage was “Je Suis,” a sobering and serious response to terrorism in Europe. It begins ambiguously, with a sole woman wandering on stage and meandering through a non-specific tap monologue when a deafening BOOM! suddenly stops her in her tracks. The audience mistook this cue for an introduction to humor, but it soon became apparent that it was a poignant movement representation of fear and disruption.  Her “Me Myself and Moi” aspired to comedy but suffered from a lack of narrative focus and was diminished by overstated clowning and theatrical immaturity. The more serious “Cages" and “Je Suis” go where tap dance rarely dares, proving that tap can address emotionally painful issues. Her "Vin Blanc, Vin Rouge" set seven men from CTT and Tappage on a tipsy tap across Jaques Brel's Paris,  bringing comic relief to the Act I finale. 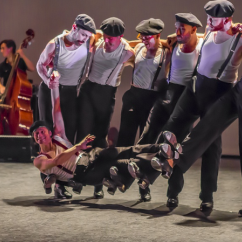 Collaborative efforts, excluding the heightened big dance/big band excitement of the program opener and finale, tended toward predictable choreographic conventions, with less visual and auditory complexity. While most of these collaborations warrant further incubation, their potential for fruitful creative combustion in the future is high. Let’s hope these talented tap dance ambassadors can carve out the time and space for that to happen.

EDITOR'S NOTE: Calling All Writers--Share Your Story! SeeChicagoDance invites YOU, our readers, to submit personal essays and stories about any aspect of dance. Selected manuscripts will be published throughout the month of April. There is a $50 honorarium. Deadline: April 1. For details and submission guidelines, see "Community News" or contact editor@seechicagodance.com.--LCS