Collisions of nature and culture in Cullberg's 'On Earth I'm Done'

The 2021 JOMBA! Contemporary Dance Experience crossed European and American borders through collaboration with Cullberg, a Swedish contemporary dance company that strives to co-create universally relevant performances. Borders between the personal and the universal, the dancer and the audience, and fiction and reality are crossed in Jefta van Dinther’s “On Earth I’m Done: Mountains,” created with and performed by Suelem de Oliveira da Silva. The piece delves into the duality of and tension between nature and culture and questions how one develops and maintains love for a perpetually transformative and capricious world, ultimately establishing the vitality of cultivating our planet and its inhabitants.

Dinther’s work is distinguished by an acute focus on suspended vibrations through the body and its interaction with light, sound and environment. “Mountains” effectively adhered to the interplay between the dancer and technical elements. Sound design by David Kiers and lighting design by Jonaton Winbo served as critical aspects of “Mountains” and supported its efficacy. The piece opened with a green light spilling over the stage with fluctuating potency, a seemingly interminable heap of textured fabric coiled around itself and the silhouette of a curvaceous woman crouched on the outskirts, her hands clasped around a red conduit that extended into the heart of the piled material. Silva pressed the pipe upwards and downwards, mimicking the undulation of a lever, as she gradually ascended to standing. I was daunted and provoked by the full-scale immersion within an otherworldly realm, an artificial exaggeration that embodied humankind’s deviation from and strife against nature in the pursuit of culture.

As the fabricated landscape transformed through the evolution of unnatural lighting, I noticed an analogous shift in the interaction and power dynamic between the environment and the performer. Silva commences the piece by driving the conduit into the center of the earth, stalking the circumference with the prowess of a huntress and a predatory scrutiny, substantiating her role as the subversive manipulator and the land as the manipulated. The roles reverse as lethargy overtakes her vitality, apprehension consumes her face, and she collapses to a crawling position. The fabric envelops, drags, suspends and escapes through her fingers as apprehension becomes lamentation and surrender.

The piece closes with Silva unraveling and ascending  the earth while she bellows juxtaposing implications of “everything in this world,” capturing the essence of an ever-changing environment and the persistently paradoxical nature-culture bind. “Mountains,” Part 1 of Dinther’s “On Earth I’m Done,” provided a mesmeric theatrical experience from the comfort of my apartment and left me fiddling with questions. Why has humanity named itself sovereign over the earth? Why are we progressively destroying our home planet in the interest of a culture that seems to oppose instinctual desires? At what point will the earth reclaim its superiority, or has it already? 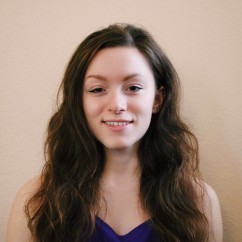 2021 Critical Dance Writing Fellow Angelina DiFranco, dancer, writer, and budding choreographer, is a current undergraduate honors student at Kent State University double majoring in Dance and English with a concentration in Professional Writing. While she began training in Ballet technique at two years old with diapers under her leotard, exposure to Horton, Limón, Graham, and the rebellious essence that pervades the foundation of Modern dance has skyrocketed her infatuation with Modern techniques. A published poet through Brainchild and Luna Negra, Angelina is thrilled by the ability to integrate her passion for performance and literary arts, as she has utilized her poetic compositions to inform her choreography. A steadfast confidence in art’s pivotal power to heal and transform has shaped her desire to perform alongside a professional dance company while pursuing a career as a dance writer and postmodern choreographer upon graduation.