The fall harvest of dance on display this past weekend (and continuing next Friday and Saturday, September 15-16, 8 PM, Ruth Page Center for the Performing Arts) yielded a bountiful sampler in the art of the duet, along with two starkly contrasting ensemble works that anchored each half of the program with knock-out dancing.

Harvest Chicago Contemporary Dance Festival producers Nicole Gifford and Melissa Mallinson have been culling contemporary choreography from less-well-known artists and smaller ensembles from Chicago and across the country for the past eight years, annually presenting work that often diverges from the mainstream.

A diversity of body types and performance styles kept the evening lively and interesting. The main thrust of Harvest seems to be work that taps individuality, relying on a combination expressionistic movement invention, some unfettered to conventional dance technique, and some deriving from finely-honed technical underpinnings.

Aerial Dance Chicago’s lyrical ensemble piece, “Blue Skies Tomorrow,” closed the first half of the program with stunning visual spectacle and accomplished technique, literally elevating the concert dance form into the air with suspended silk panels on which the dancers climbed, hung, swang, and posed in various sculptural formations.  Their seamless integration of dance and aerial acrobatics created breathtaking abstractions. 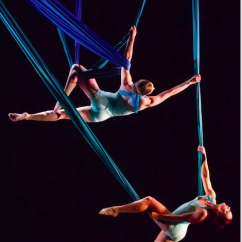 Joshua Blake Carter’s “Before My Eyes,” performed by the impressively polished Giordano II, of which he is the director as well, closed the second half of the program. Complex partnering, challenging, highly creative movement invention, and dramatic use of music capture the mood and loose narrative journey of the seven dancers from dream state to the here and now to the transcendent. Carter’s skill in use of contrasting group movement patterns adds depth and interest to a piece that begs more to come from this promising young choreographer. 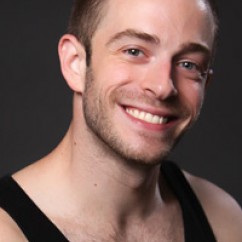 Agua Dulce Dance Theater’s Alicia Diaz and Héctor “Coco” Barez exemplified  divergence from the mainstream, opening the program with a musician/dancer duet of low drones, drumming, and percussive sound effects that emphasized Diaz’s naturalistic style. Hip swivels and earthy body undulations evolved from an underwater feel of rolling waves to sensual foot-stomping rhythms, her marvelous print skirt flaring in cartwheels to reveal the fiery red petticoats beneath. Barez as musician was every bit the partner in this duet, his physical and auditory presence alternating as snake charmer, shaman, and alter ego.

Maya Taylor and Curtis Thomas brought a burly, untamed energy to their powerful interplay. Their compelling duet made strong use of oppositional movement and bold attack to embody a relationship of complex needs, conflict, and almost violent interdependence. 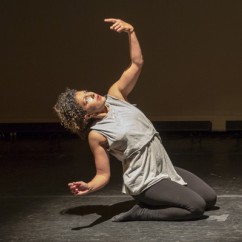 Dmitri Peskov’s “solo solo duo” sent Rachel Miller and Peskov on parallel solo journeys through a personal hell of what seemed like swarms of fire ants attacking body parts, modulated by intermittent collapse into fetal withdrawal.  Their pained isolation from each other forms the core of the duet’s structure. 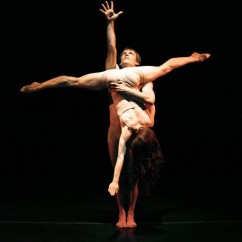 In another instance of duets that don’t quite connect, Emma Draves’ excerpt, “Listen,” puts Draves and Andy Slavin in an ambiguous relationship that only briefly flirts with intimacy.  Elbows formed a thematic link between the two in an inventive percussion sequence that heightened emotional momentum in a piece that otherwise found its pace on mostly one dynamic level of detachment.

Margi Cole’s solo performance of “threadwork,” her work with collaborator Margaret Jenkins, makes clever use of ropes to define space and life—a circle, a square, a corridor— in the multiple ways in which space defines, inhibits, and directs us. Clear, sustained lines and simple, deliberate action characterize Cole’s mature performance of this piece.

Dancers Sharon Picasso and Mirabai Miller brought comic relief to the evening with Jennifer Glaws’ “White Space—a need to be fed,” riffing on the rock idol’s voracious hunger for applause and adulation and the emptiness behind it.

Jordan Reinwald and Osnel Delgado’s “The Elephant in the Room,” superbly danced by Reinwald and Michel Rodriguez Cintra brought yet another dimension to the duet, in a slice-of-life continuum that highlighted the dancers’ technical prowess and the ease and flow of their liquid partnering.