In Heather's words (Part 2): Reflecting on See Chicago Dance and the community it supports

Editor's note: Yesterday I shared the first part of my "exit interview" with See Chicago Dance's outgoing executive director Heather Hartley. Here we chat a little more about the origins of the orginization and some reflection on how to tackle ongoing challenges in Chicago's dance community. Tomorrow I'll share some of my conversation with interim executive director Surinder Martignetti about her role keeping the ship afloat as SCD seeks new leadership.

Heather Hartley: When the Chicago Community Trust started this whole project, it did three things: One was the data mapping report from 2003, which is what we just refreshed. The second was doing a study to see what small to mid-size artists’ needs were. That included people like Ginger Farley, Julia Rhoads and Eduardo Villaro. Out of that came the Chicago Dancemakers Forum, and they got three years of funding to support their launch. And then the third activity was marketing and audience engagement, led by a team of myself and six or seven other marketing directors around the city. We worked with consultants to figure out how to make a city-wide website. That's how See Chicago Dance began, at the same time as the Dancemakers Forum for the artists, and then its non-identical twin See Chicago Dance, to focus on the audience side.

[Funding from the Trust] continued for three or four years, and we became fiscally sponsored by Hubbard Street. I moved to Hubbard Street at that point and was the director of marking there, so I’ve followed See Chicago Dance all the way. I was a consultant for See Chicago Dance as they were doing focus groups to figure out whether or not they should grow (when they were still Audience Architects), and then they hired me as the first E.D. It feels like it was this little baby that I kind of nurtured along. I'm intensely grateful for that opportunity. Carol Fox, Gail Kalver and Niki Morrison deserve a huge shout, because without them it never would have happened.

I think what became clear to me was that there are many different ways to build audiences. I got to play in this fabulous sandbox of trying different things and seeing what worked, what people really needed, what they were responding to, and what they thought was stupid – you know, because people will tell you!

I think See Chicago Dance grew because we listened, for better or for worse. I thought it was so important to create pipelines and avenues for feedback. We took what was usually an annual or twice a year convening and made it four times a year. We added a holiday party, and we started doing things out in the community so that we actually had a physical presence as well as a digital presence. We tried to expand our writing all sorts of different ways with everything from the Moving Dialogs blog, to written feedback about the Moving Canvas Project, to creating opportunities like Our Readers Write – trying to find ways that voices could be heard besides mine.

The success was in finding ways to still remain primarily true to our mission of building audience, but also adding these ideas in engagement and communication. The funding community responded to that, which enabled us to get grants to do more of that kind of work. Frankly, it was easier to raise dollars for something that was more public and engaging. It was a response to a reality, so we just tried to respond appropriately to what it was that people needed.

Lauren Warnecke: There are specific quantitative metrics that you can use to measure success in terms of the health of the organization as well as the fulfillment of its mission. But See Chicago Dance is not the type of thing where it's like: We did it! We got people to see Chicago dance! What is the benefit of having a locally-grown dance service organization? Subjectively, how do you measure success, and how do you show the dance community that progress has taken place? How does the goal of audience engagement serve them and make their lives better?

HH: Well, it's a slightly different answer depending upon which part of the stratosphere you're talking about. The Chicago dance community, that's a very generalized statement, and one of the things that I learned very quickly is that one size does not fit all. So, the great challenge in leading a service organization or trying to develop programs for a community is understanding that the community has many different facets. It's like a prism.

What is a measurement of success in certain arenas is different in others, but what I see and feel is pretty clearly true, is a greater conversation happening. People from various different dance companies, genres, races, communities and budget sizes are talking to one another more frequently. I see dialogue occurring on social media platforms, which I'm sure is a huge contributor to that, between a contemporary experimental choreographer and someone with a tap company, for example. It says to me that there is a stronger fabric. That doesn't happen everywhere. 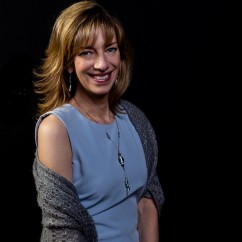 Heather Hartley, photo by Philamonjaro Links Hall is packed to the walls in terms of creativity and different genres. The calendar is consistently full even as they grew and located themselves in a different neighborhood. That's not always the case – people don't always experience growth when they move to a new venue.

Our larger companies and our larger organizations are selling more tickets than they ever have before. The Joffrey exceeded all revenue projections with Anna Karenina. I think they surpassed their revenue goal before opening night.

And then there is a lot of important work that's being done in terms diversity, equity and inclusivity. Particularly I'm thinking about some of the activity I’m seeing percolate on the South side. I’m very curious to see what happens with Deeply Rooted and their partnership with the Logan Center and a South side dance facility. The community on the South side is abundant, there is beautiful work being made, and they deserve, absolutely, to have a dance space and a dance network here that doesn't require their audience to travel downtown.

You know, it’s hard. There’s a lot of competition, and not enough money. And that will always be the case. It just is.

What I would love to see is some sort of ground swell that allows the Chicago dance community, in general, to feel more prosperous. Whether that's with dollars, or with greater recognition, or with more seats at the table in terms of conversations in and bigger decisions about a community, a park district space, what's happening in your neighborhood, what's happening on the 606. To have a dance artist at the table should be just as natural as having someone from a city office or an alderman.

How is the Lake Michigan coast going to find a pathway forward? I think about the TV and film industry. The Illinois Film Office opened up new avenues. They removed a lot of tax barriers for film companies to come here. Let's think about what's happening successfully on the West coast. Does it need to be that there is work being done with the music community to make more music videos here, for example, or do we need to be creating different opportunities in terms of health and wellness? The field of dance has such opportunity in the health wellness sector. I've been trying to scratch away at that for some time. Some of the best medical university systems in the country are here. Why isn't there something that is a natural pathway for arts, dance therapy and medicine? I think that is a real space for growth.

LW: A lot of these things are sitting right at the precipice. You had your first dancer day of health, for example, and it’s a starting point. We have to just wait and see if there is any kind of trickle down, and that's where things like See Chicago Dance come into play. I'm feeling that a lot of these initiatives that you're talking about, and things that you're hoping for, we're actually standing on the edge of those things looking over and just have to go for it.

HH: I invite our major health care companies that have their corporate headquarters here in Chicago such as Blue Cross Blue Shield and Allstate to take a moment and really think about how vibrant Chicago's sector is. Part of that is the dance community, and these are people that are working with their bodies. Blue Cross Blue Shield of Illinois should be adopting dance companies and placing dance companies in its wellness centers around the city. It's really about being entrepreneurial. Frankly, the small to mid-size budget organizations are more nimble, yet they’re also ridiculously over worked and stretched too thin. But if there were a sort of collective investment of time put forward, the folks in that budget category can move more quickly on the ground. That's an asset!

LW: Do you think See Chicago Dance – I'm sure right now they don't have the capacity to either spearhead or collaborate on something like this – but do you see that being part of an expansion of the mission in the future?

HH: There're so many different directions where See Chicago Dance could and should put its energy, but it is always that question of, where can a small organization with a $380,000 budget have the most impact? So I would encourage whomever is the next executive director, first of all, give me a call, if you want, but do a deeper dive and figure out where you can put your shoulder in and have the most impact. The other ways in which the organization can continue to have impact is to keep being very involved with DCASE and continue to have conversations at the city level, to continue to look at ways to increase equity and inclusivity. So much of my job was showing up at meetings and saying, “That’s great. How about dance?” That’s the advocacy that I hope will continue on.

Look for part 3 of Heather's "exit interview," including a chat with interim E.D. Surinder Martignetti, on See Chicago Dance tomorrow. Community members are invited to toast Heather and Phil at a going away celebration Thursday June 6, 5-7 p.m. at the Dance Center of Columbia College, 1306 S. Michigan Ave.