Even though we are still in the throes of the COVID-19 global pandemic and witnessing the majority of dance virtually, the Loyola University dance program has found a way to showcase the things that brings us all together—the common denominator of humanity. “Spectral Heartbeats” is an apt title for a program which takes personal stories literally to heart creating a ghostlike vision of what we are missing during this pandemic: human connection.

The centerpiece of the show is a newly commissioned dance film by faculty member Sarah Cullen Fuller and dancer-turned-filmmaker Talia Koylass. Titled “Family Tree,” the film traces the dancers’ ancestry through familial stories and manipulated phrases which were initially pieced together via Zoom and shot on location at Loyola Beach. Each dancer received a timed slot for filming. The entire gestation of the work was only six weeks, plus post-production time for editing.

“It was a true collaboration,” Koylass said in a phone interview. She and Fuller instructed each dancer to talk with a family member, asking their relative to tell a story about someone else in their family. “We intentionally left the prompt broad,” Koylass said. “Our biggest goal was to tell the dancers’ stories, so we started by having them bring their stories to us. This piece is an ode to these dancers and their families and what they discovered during this process.”

Presented as a series of solos, “Family Tree” is really about migration. Fuller and Koylass suggested they travel the dance phrases they made, hinting to the journey of America as a land of immigrants.

“Our family stories echo through us,” said Koylass. “We really played with common themes we found throughout their stories to build the solos.” 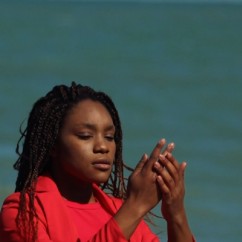 Junior Nia Montgomery in a screen shot from Sarah Cullen Fuller and Talia Koylass' dance film, "Family Tree." Nia Montgomery, a 20-year-old junior, is one of the dancers in the piece. She found the unusual process putting “Family Tree” together to be exciting. “It was a very interesting process that I haven’t had before,” she said. “Most of the choreography was done by us, the students. I’ve never been in a piece where my work was completely there. Sarah and Talia guided us with the intention of our movement and gave instructions, but we created the phrases based off of prompts they gave.” The dancers also made an “antithesis phrase” and an “echo phrase” which were incorporated into the larger work to help reflect their stories.

Another unusual aspect during the creation was the lack of music. The material was generated and manipulated in silence. The dancers were recorded speaking portions of the stories to create voice memos which were eventually used in an original score composed by Jasmin Taylor. Individual voices woven in with music and vocals created a sense of singularity: one voice, one narrative.

Senior dancer Masha Bandouil’s new work “Mic Check 1.2” also premieres in “Spectral Heartbeats.” A 21-year-old dance/biology double major, Bandouil, who uses they/them pronouns, has a surprisingly robust history of making dance films. Their film series “Dance of the Double Helix” aimed to make science more accessible and tackled generational Jewish genetics. Bandouil received the Interdisciplinary Research Fellowship and Johnson Fellowship, and won first place at the Film Festival at University of Nebraska’s SciComm Conference. Previously scheduled to present their choreography on stage in November, COVID cancellations changed the plan and they decided to try their hand at a dance film. The new visual work uses projections to experiment with “inner voices and how they impact us in positive and negative ways,” they said in an interview.

Although other dancers went through the process with Bandouil, this piece is personal. “As a queer person living in a society that wasn’t necessarily built for me, I always think about how societal influences have ingrained themselves inside of me and how they continue to control me, even when I’m alone,” they said. “I thought if I could make those inner voices physical through a projection or a person it would be a cool way to see they aren’t just invisible things. You can see them and reclaim yourself.”

Even though we are separated and watching from the comfort of our homes, the projections in the film bring us together in common humanness. Normally using the energy in the room to help them choreograph, Bandouil needed to find a new way in the age of Zoom. “I struggled with that. Eventually I created pairs of two and each pair become each other’s inner voices. I really tried to create a genuine connection.”

Also on the program is “Rooms,” a study in isolation by Anna Sokolow created in 1955. "Rooms" is the only piece that will be performed live and is a perfect nod to the current six-feet-apart social distancing we are experiencing. Capping it off is the Friends Dance from the comic ballet “Coppelia,” originally choreographed by Arthur Saint Leon in 1870 and set by Raul Casasola from The Joffrey Ballet. With an upbeat score by Leo Delibes, this classical group dance brings a lighthearted hope to the virtual stage.