No limit in airborne "Revel in Your Body," a dance film that literally flies

“’Revel’ is a gift of love. We made it, in some ways, for ourselves as a gift of love and flight and enjoyment. And if the film lands with someone else as a gift, or as a provocation, or as—whatever it lands as—then the film has done its work.” Alice Sheppard

Clasping hands with another dancer and spinning through space is something dancers can only dream about since the COVID-19 pandemic closed studios and canceled productions and festivals all over the world. And yet it is because of the pandemic that international audiences are able to enjoy this opening gesture between Alice Sheppard and Laurel Lawson in the dance film “Revel in Your Body.” In its 22nd-year, the South African dance festival JOMBA! Contemporary Dance Experience has gone digital. Tara Aisha Willis, co-curator of the USA Dance on Screen platform presented as part of the festival, describes the work as “choreographing space and gravity from a disability art perspective alongside the Atlanta, Georgia skyline.” I saw the film “Revel in Your Body” twice before this presentation at Digital JOMBA!, but this time I wanted to know more. I reached out to dancer and choreographer Alice Sheppard to talk with her about the film, its audio descriptions and disability dance in general.

JOMBA! featured South African integrated dance companies in the past. In 2018, Unmute Dance Company & Flatfoot Dance Company co-created the work “The Longitude of Silence” by Andile Vellum and Lliane Loots. Integrated dance features dancers with and without disabilities, while Kinetic Light is a disability arts ensemble made up exclusively of disabled artists and designers. Disability aesthetics and culture are essential to their work. “This is different,”  Sheppard, artistic director of Kinetic Light, explained. “The work that I want to do is to ask separate questions about relationships.” Rather than focus on the possibilities that occur with and without dancers with disabilities, Sheppard said, “If you take a non-disabled dancer and the normative body and mind out of the question and out of a frame of reference, then you have a different set of questions. It's those questions that I'm currently working with.”

Disability culture varies by region and this is the first time Kinetic Light’s work has been formally shown in South Africa. I was interested to know if any integrated dance companies impact Sheppard’s artistic practice. Sheppard’s response highlighted the ability of online art to cross the globe just as her own work is doing in JOMBA! “The understanding for me as a dancer of color is to look at and learn about how disability is experienced in other dance forms and in other cultures,” Sheppard said. “So, I am constantly on the web, looking and looking and looking and watching what dancers do with their bodies as they encounter different movement vocabularies. How do things live outside conventional western European forms? I'm always looking; I'm always on YouTube.” This can be seen in “Revel in Your Body,” directed by Katherine Helen Fisher, which streams as a unique combination of soaring bodies and wheelchairs, rarely seen in the dance world.

Sections of the dance were filmed in an empty parking garage with plenty of space for Lawson and Sheppard to roll down ramps with arms outstretched behind them. As they rush towards the camera they grab their wheels to slow the descent. The camera cuts away before they stop moving, leaving them in constant motion. The combination of this setting, layered with the sound score and dance left me wanting to know more about the creative impetus behind the piece. The score, by Jacob Bloomfield-Misrach, is different from past versions of them film employing a choral soundtrack by Missy Mazzoli. Sound designer Bijan Sharifi added live sounds from the wheelchairs and city which bubble through in the score. This multisensory experience felt more like live dance; I could hear the wheelchairs crunching gravel as they turned on the concrete of the parking lot.

“One of the questions was flight,” Sheppard said. Her interest in this lies in “the specificity of grounded space,” but also “the decontextualized terrain of the air.” The air: a stark blue sky that Lawson and Sheppard bound into with their chairs (designed by Lawson and Paul Schulte). Slow-motion shots switch from soaring wheels, to faces, to outstretched arms all set against this cloudless sky. These shots leave me unsure what way is up until gravity slowly pulls the dancers from the frame.

“Revel in Your Body” can be experienced in a multitude of ways based on viewers’ access needs. Kinetic Light is known for taking great care with audio description (AD), which is carefully crafted by Cheryl Green. Sheppard describes the work as having “a relatively conservative approach to description.”  Kinetic Light is known for having created an innovative AD app, Audimance, as a way to experience their full-length performance “Descent” (2018).  Sheppard explained that “Revel” uses “a single voice description and a transcript. So, partly, one of the questions we asked Cheryl was how to capture the flight.” Audiences hear Green’s dulcet voice describing concrete stairs and exuberant facial expression. “I think Cheryl's working on how to capture the physical and visual sensation of landings and flight,” Sheppard said. Audio Description for dance varies and Green’s poetic interpretation includes emotions, lighting and also silence. Sheppard explained that the AD “Revel” is not just describing the action. For me, this can be experienced at the moment Green describes the sun as “blasting” through the spokes of Lawson’s chair as she is lifted into the air. At that moment, the lighting of the scene is warmed by the sun filtered through Lawson’s chair rising off the ground. Not having experienced the work with AD before, I wanted to know if any alterations had been made for a South African audience. But Sheppard clarified, “This is the US-based audio description and essentially nothing is contextualized to the culture that it's going into. This is coming and traveling as a North American film, which has its own implications.”

Though the piece is about flight, what resonates for me are the landings. I feel the contact of each slow-motion landing as Sheppard and Lawson roll over a staircase rail; as their wheels hit the ground, you can see shocks pulsate through their shiny copper pants (designed by Lawson). Green describes this as, “Wheels land and bounce. Vibrations reverberate through the body.”  The new soundtrack of watching with AD expanded this moment for me. I not only saw vibrating chairs but also hear the reverberation caused by rubber and spokes as they hit the concrete stairs. The combination of innovation, site-specific dance and the joy the artists put into the work is reflected in a film that has brought dance right into my home twice during this pandemic. I hope to share it with my own inclusive dance community.

You can experience “Revel in Your Body” for free on the last day of Digit JOMBA!, Sunday Sep. 6 at 12 p.m. CST.  If you can’t wait, check out the Audio Described version in the JOMBA! package of suplementary materials accompanying USA Dance on Screen. Kinetic Light’s Descent will be available for virtual enjoyment for the first time Dec 3rd through the 5th through the Walker Arts Center and Northrup. 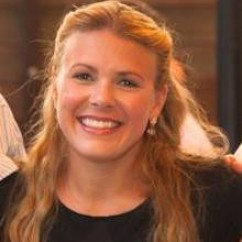 Fellow Sydney Erlikh (MSEd) is a doctoral candidate in disability studies at the University of Illinois Chicago. She is studying dance and disability to create a multi-sited ethnography on mixed-ability dance groups that include individuals with intellectual disabilities. Sydney taught special education in alternate assessment classrooms for seven years in New York City and California, where she created dance opportunities for students. Sydney is a DanceAbility certified teacher and has attended the AXIS dance teacher training. She was awarded a 2019-2020 Chicago Area Schweitzer Fellowship with her partner, Maggie Bridger, which led to the creation of Inclusive Dance Workshop Series at Access Living in Chicago. Sydney currently serves on the NDEO dance and disability task force and has presented at conferences on using AAC in dance.