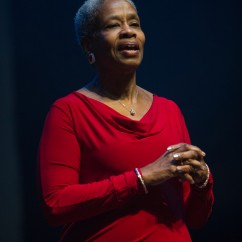 Joan Gray was born on July 29, 1949, in Chicago, Illinois. Joan is most known for her role as a member and President of Muntu Dance Theatre. Joan began studying African dance in the late 1970s and first joined Muntu in 1984. Joan became President of Muntu in 1987 and led Muntu’s evolution to becoming one of the premier African dance companies in the country. After 30 plus years of service, Joan retired from Muntu in 2016.

In addition to her work with Muntu, Joan has made significant contributions to the broader local and national arts community. Joan was active as a board member of the International Association of Blacks in Dance for over a decade, and served on the African American Arts Alliance and the Chicago Dance Coalition. She also served on the Board of the National Endowment for the Arts (NEA) for many years and took great pride in her role of influencing Federal funding decisions for artists and arts organizations across the country.

Joan’s success and accomplishments have been recognized over the years through many awards and accolades. She received an honorary doctorate from North Central College in Naperville (which she once attended) and was also awarded a Graduate Fellowship from Stanford University. In 2017, Joan was featured in a 132 foot mural by artist Kerry James Marshall, as one of 20 women who changed the artistic and cultural landscape of Chicago. The mural is prominently featured at the Chicago Cultural Center in downtown Chicago. 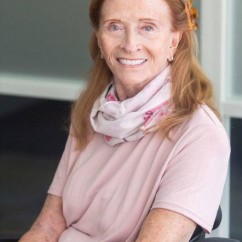 Ginger Lane is a dancer, choreographer, and teacher working in physically integrated dance. She trained in Chicago with nationally-renowned instructors including Edna McRae and Stone-Camryn, received a dance scholarship to the prestigious Interlochen Center for the Arts, and went on to graduate from the acclaimed theater program at Northwestern University. Ginger was an original member of Dance>Detour, the first physically integrated professional dance company in the tri-state area. She has been named one of “100 Women Making a Difference” in

Today’s Chicago Woman magazine, received a 3Arts Award for her work as a choreographer, and was grand marshal of Chicago’s 2019 Disability Pride Parade. She has also served as a dance panelist for the National Endowment for the Arts, and currently is on the Board of Directors for both ReinventAbility and the Chicago Cultural Advisory Council.

In 1984, Ginger became a wheelchair user following recovery from a skiing accident.  She then embarked on a career of disability rights advocacy and became a leader of the integrated/inclusive dance movement. Ginger performed with the Joffrey Ballet and was featured in Dance From the Heart, an Emmy award-winning film for PBS.  As Coordinator of the Arts & Culture project at Access Living, Ginger curated and produced artistic and cultural events and festivals for 11 years. During that time, Ginger also choreographed and performed in many inclusive danceworks as a member of the MOMENTA Dance Company (2003-2021). In 2008, she conceived of and founded CounterBalance: The Power Of Integrated Dance. Ginger served as Artistic Director of this annual showcase, that is not only inclusive of but features work by disabled dance artists, until her retirement in 2020. Ginger continues to work as an independent artist, mentoring emerging artists and experimenting with new technology in this digital age, consulting with Ballet Chicago, and was recently honored by Mayor Lori Lightfoot as a Chicago Leader for Women’s History Month. She is also currently on the Summer Dance Advisory Council.

Ginger discovered the transformative power of dance as a refugee to the United States. She and her siblings had to be hidden from the Nazis after their mother was murdered in Auschwitz. The story of her life in Germany, living through and surviving the Holocaust, is the subject of a new documentary, Would You Hide Me? due to be released later this year.