Stomping Grounds: A Bang for Your Buck-And-Wing

A joyful bombardment of rhythms from all corners of the globe fell on a whooping audience at downtown Chicago’s newly-restored Studebaker Theater Friday night for a celebratory culmination of The Chicago Human Rhythm Project’s “Stomping Grounds.”

Making visual and audible rhythm by stretching the mechanical limits of the human body and exorcising demons of the human heart through percussive movement has likely been part of the human experience since the dawn of humanity. Last night’s programming was especially well-structured to demonstrate how differently, or similarly, that expression has taken form in different parts of the world.  With each company appearing at least twice at intervals throughout the evening, the audience could witness both the universality and culturally distinct expression of the innate human response to the rhythms that infuse our internal landscape and define our external world.

The first of three works by Ensemble Español Spanish Dance Theater opened the program with the seething restraint of “Danza del Fuego” (1979), a 20th-century blend of Ballet Español and Flamenco styles choreographed by company founder Dame Libby Komaiko.  The slow rhythmic build, with the men’s Flamenco heels and women’s alluring hip action and hand articulation, was simple and elegant, a beautifully-understated demonstration of the company’s superb mastery of line and technique. Lamentably, either the sound system or a fuzzy recording of Pablo Luna’s orchestral music detracted. Dancing of this quality deserves up-to-date acoustics. 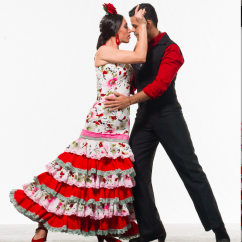 Ensemble Español Artistic director Irma Suarez Ruiz’s “Nuestro Camino (Our Path) Alegrias” (2016) and “No Me Olvides (Do Not Forget Me) Romeros” (2008) expanded footwork into complex Flamenco rhythms, couplings, and flowing spatial patterns.  Heel action dominated, with glorious port de bras and lush body arches as much a part of the idiom as its audible signature Andalusian rhythms. The Ensemble’s American Spanish Dance and Music Festival offers a full spectrum of Spanish dance styles and repertoire in “Raices,” June 16-18 at North Shore Center for the Performing Arts.

In a 180-degree turn, the explosive burst of live drumming and spirited syncopations in Muntu Dance Theatre of Chicago’s  “YADO….DJALLI  DONG” unleashed raucous kicks, high-flying knees, and unrestrained elbows in an ecstatic outpouring of energy. The super-charged drum corps of six on-stage musicians fueled the African forms of artistic director Amaniyea Payne and Babacar N’Daiaye’s choreography, derived from the Dance of the Griot. The visual spectacle of traditional costuming, with men in blue and women in red, underscored the excitement of movement counterpoint between genders. 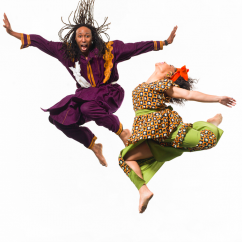 Of the two offerings performed by the Mexican Folkloric Dance Company, company director José L. Ovalle’s act two “Sones” far out-distanced his undernourished, ballroom-inspired “Saraos,” performed in act one.  In “Sones,” Ovalle’s use of Mexican folk dance forms came to life with enthusiastic heel-stomping, swirling skirts that created a dance all their own, and waving sombreros, showing the ensemble to its dazzling best advantage. 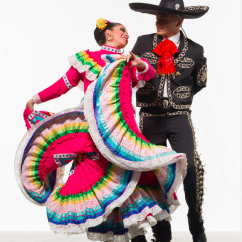 The Chicago Human Rhythm Project’s eight superb tappers first performed three classic early 20th-century tap numbers by Harold “Stumpy” Cromer and Buster Brown, set to music by Tommy Dorsey and from the movie, "Laura." Artist in residence Daniel Borak’s  act two “Don’t/Fragile/Funkroll” combined an aesthetic of easy arms and loose upper bodies that made as much rhythmic response to the jazzy music as their fabulous footwork, creating a full-out dance experience of sound and visual design. Borak’s musical sensibilities surprised with jumps that changed direction and unusual combinations of crisp rhythmic counterpoint between the dancers. 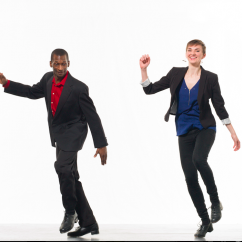 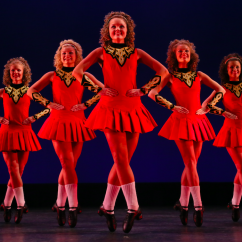 Topping off the night, Muntu’s drummers outdid themselves in “Drum Talk,” a musical conversation that plumbed every nuance of tone and rhythm as if the sound of the drums emanated directly from their bodies. The marvelous Muntu dancers joined them on stage for Moustapha Bangoura’s “Triba” a rip-roaring finish with all body parts in motion, their energy matching the ear-splitting wonder of the drum choir.