No Overture. Lights come up on a sixteen-piece chamber orchestra filling half of the Harris Theater stage. Just in front of the orchestra, a pool of light illuminates  a solitary man slouched in an upholstered Victorian arm chair. As the energetic conductor, front and center, raises his baton, he simultaneously activates both orchestra and man, and the full-length ballet “The Dream” unfolds before us. 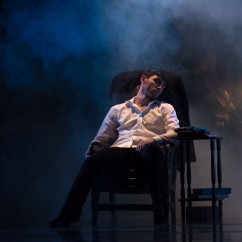 Brandon Coleman as The Man

Co-produced by Visceral Dance Chicago and The Chicago Philharmonic, “The Dream” is a dream come true for the two companies, who found artistic chemistry with two previous small-scale collaborations. “The Dream” is their first full-length work together, premiered Sunday for one performance only at the Harris Theater. One can only hope the success of “The Dream” portends more to come.

Adapted from Fyodor Dostoyevsky’s 1877 short story, “The Dream of a Ridiculous Man,” “The Dream” engaged the talents of dancers and musicians alike over the past year as Nick Pupillo, Visceral’s artistic director/choreographer, and Scott Speck, the Philharmonic’s conductor/artistic director shaped the story for the stage.

Through experimentation in the rehearsal studio, they pieced together fourteen different musical selections. Included are composers as divergent as Tchaikovsky and John Cage, Shostakovitch and Johnny Greenwood,  Rachmaninoff and Thom Yorke, comprising a highly creative composite that partners the choreographed scenes with narrative fidelity and seamless continuity. The physical presence of the musicians on stage and the electrically-charged environment of live music instill a vitality of performance in the excellent Visceral dancers that underscores the depth of their collaboration.

It’s no small wonder why the Dostoyevsky story inspired Pupillo. The Russian master’s utopian tale of despair and redemption gnashes its teeth on the author’s recurring theme of the young intellectual’s psychological dual with life and death, seeming and reality, seeking meaning but finding none in a corrupt world. The parallels to the moral indifference we face today and Dostoyevsky’s vision of redemption through love captivated his imagination.

What saves “The Dream” from melodramatic overkill is Pupillo’s fresh use of movement impulse to drive the overriding message of the story. The Ridiculous Man's dream reveals to him that saving the world from itself is up to each individual:  “The chief thing is to love others as yourself, that’s the great thing, and that’s everything: nothing else is wanted.”

Adaptation from literature works best when its translation to an alternate medium enhances the meaning and brings out strengths the written word alone cannot. In the case of “The Dream,” the challenge is to take a story with essentially no action and no dialogue—it all occurs in the mind and thought-process of the protagonist—and give it physical substance. Pupillo and Speck have done just that, realizing in music, movement, and visual spectacle what Dostoyevsky's dark intellectual monologue can only describe. True to its name, Visceral Dance's adaptation delivers the story's essence in a living, breathing reality the audience can experience on a truly visceral level.

Both the Dostoyevsky text and the ballet tell the story from The Man’s point of view. The Man speaks, both on the page and in movement on stage, in desperate terms. In his opening choreographic soliloquy, Pupillo gives The Man, brilliantly danced by Brandon Coleman, an emotional upside-down duet with the chair that rips open the character’s mind in the agonized physicalization of his psychological pain.  We need no words to see the truth of his agony in the hand thrust to his forehead, the torque of his spine, the agitation of legs that can neither rest nor propel movement, as if the chair were at once his refuge and the prison from which he cannot escape. On the verge of ending it all by shooting himself, The Man falls asleep. Dream demons transport him to a utopian world in a bacchanal of black-caped twirls, dancing the furniture off-stage and delivering him into the welcoming arms of Noelle Kayser’s seductive Guardian. Paradise is symmetrical and balletic, with the lyricism of sweeping arcs and unison movement, soaring lifts and guileless coupling, highlighted by a pristine moment for Hanna Brictson in a utopian vision of perfection. 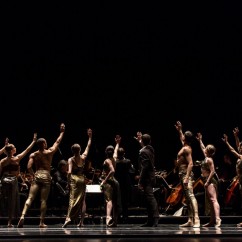 All too soon, The Man inadvertently introduces human fallibility into their midst. Their corruption mirrors the gestures of The Man’s opening soliloquy, asymmetry and rhythmic unevenness infiltrating the harmony of their movement with upside-down contortions and angularity. 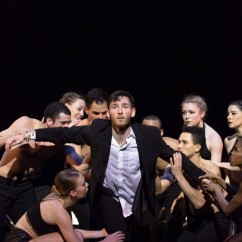 The seemingly innocent seeds of corruption The Man discovers in his own nature so horrify him that he awakens to a whole new take on life, vowing to change the world by spreading peace and love through acts of kindness.

The joy of revelation takes over his body in a memory dance of his dream, with expansive diagonals across the space, arms and legs pulling to opposite corners, glorious spiral turns, acrobatic back falls to the floor, flips to standing and reverential high releases exalting the heavens. Joy propels him back out into the world to bestow kindness upon his fellow men and women.

In Dostoyevsky’s cynicism, the man tells of how people now scoff at him, call him a madman. “It was a dream, they say, delirium, hallucination….And they are so proud! A dream! What is a dream? And is not our life a dream?” In Pupillo’s version, the dream comes true.