“It’s a great match,” Brian Brooks said in a recent interview with SeeChicagoDance, anticipating Miami City Ballet’s premiere of his “One Line Drawn,” co-produced by Chicago’s Harris Theater for Music and Dance. “I’m such a foreign visitor to ballet. It’s amazing,” he reflected, “we take these journeys to get the rug pulled out from under, and then feel “home.”

By all accounts, the feelings are mutual. “It’s been a great experience,” says MCB dancer Bradley Dunlap, “very different from what we’re used to, with a lot more upper body movement and more room for interpretation, breaking free from the structured vocabulary of classical ballet.”

I was lucky enough last weekend to see one of Miami City Ballet’s first performances of Brooks’ “One Line Drawn,” set to an original orchestral score by Michael Gordon, performed live, at the Kravis Center in West Palm Beach, Florida.

The dancers, enthralled by Brooks’ inclusive, calm manor and supportive approach to experimentation throughout the rehearsal process, are admittedly still getting their bearings in the choreography and music, although you would never guess as much from their stunning performance of this sweeping, epic piece last Saturday night. 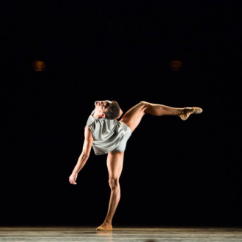 Still so new, “each time it feels so different,” says Dunlap.  The piece opens with the dancers emerging from the obscurity of upstage fog and darkness, floor-to-rafters columns of luminous disks scaling the upstage wall and focused out to the audience.

The dancers, costumed in Karen Young’s simply elegant unisex silver tunics and trunks, converge in a single-file line bisecting the stage, and then peel off. Liquid mercury is the image that immediately comes to mind, with rapid-fire whole-body dips and weaves, arms sculling space as if navigating paths through viscous waters.

“I think we’re all still working on it, focusing on something different each time we perform it,”  says Principal Soloist Lauren Fadeley. She recalls Brooks coaching them to  “find the wind in the movement,” to achieve more of a sense of flow. One is struck by the play of continuous movement with momentary breath and suspension. In her solo, Fadeley has an attitude turn. “Some days I’ll really stay on—you have that freedom of play,” she says, within the music. 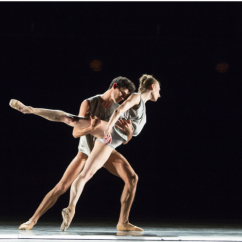 Duet Segment from "One Line Drawn"

“There’s an emotional moment,”  Dunlap said, “where the lights come up at the beginning of the piece, he’s got me moving super fast. It’s as if my body’s moving before my mind catches up.” This was true for the audience as well, at least for this viewer. The energy of the movement forces you to throw thought to the wind and experience the subtle play of tension and release reflected in the interplay of musical structure and spatial design. The individual  dancers, navigating Gordon’s rhythmic continuum of sound layers, form a whole, unified liquid body seeking equilibrium but never quite arriving, except every so often, when they re-convene for a brief, exquisite moment of “one line drawn.”

The music was initially difficult for the dancers, the beginning and ending requiring strict counting, but the middle is more open, allowing for some variation in timing and interpretation. Fadeley describes her role as a kind of time-keeper, keeping her solo going until she hears a siren sound in the music. Her solo, pure inspiration, commands the entire stage like quick-silver as she appears to wiggle in and out of her skin, a golden light singeing her limbs.

Part of Brooks’ three-year fellowship as the inaugural Harris Theater Choreographer in Residence, “One Line Drawn” pulled both Brooks and MCB dancers out of their comfort zones. Brooks had never before choreographed for ballerinas en pointe, and his modern dance vocabulary and movement style were largely foreign to most of the classically-trained MCB dancers when he began developing  his new piece with them last August.

Dunlap was especially struck by the different use of weight in Brooks’ movement. “With ballet, you’re very lifted,” Dunlop said. “Brian worked on getting us more grounded. I’d leave those rehearsals, and my brain was so stretched to the limits, I couldn’t even remember my name!” 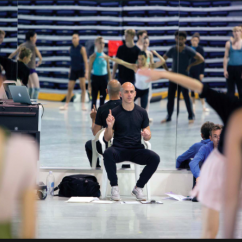 “It was hard,” said Fadeley, “but his energy made us want to do it.” She was grateful “to have this environment where it’s okay to move this way.”

The Miami dancers’ willingness to go the distance with the material inspired Brooks as well. “The thrill, even in the first day,” Brooks said, “they were so excited to see each other moving so differently, daring to take risks. We all stayed so committed and excited.”

“It felt like he was part of the company with us,” Fadeley said.

Brooks began the rehearsal process teaching them a long movement phrase, “and we all learned this phrase in soft ballet slippers,” Fadeley explained. “He made sure we understood the phrase, the intentions behind it, and then asked the dancers to go and work on it on their own.” The kinds of “intentions” Brooks wanted the dancers to embody centered on the physical origins of the movement, “like one phrase starts from the tip of the head.”

Brooks was fascinated by pointe work and repeatedly asked the dancers what they would do with the movement in point shoes. “He was so involved with us, he’d say, ‘Show me what you think YOU would do.’ It felt like we were part of the creation.”

“The way he approached us as dancers gave us a lot of confidence,” she said. Unlike most of her MCB colleagues, Fadeley, who came to MCB from Pennsylvania Ballet, had considerable experience with contemporary choreography. “I enjoyed that about Brian’s work.  With his  port de bras (use of  the arms and upper body), you can express yourself more freely.” She also loved being asked to take risks in the rehearsal process. “It was like a workshop,” she said. “A lot of (the MCB) dancers had never done exploratory work before.”

At the end of the first week of rehearsals, Fadeley explained, Brooks asked the dancers to each create their own kind of solo using the movement from that first long phrase. They formed a circle, and then, one at a time, each performed his or her solo. “It was so cool,” Fadeley said, “to see all these dancers do the same phrase and each one so different!”

“Brian was so instinctive and present with us,” Dunlap said. “He read the room well.”

Now that “One Line Drawn” is in performance, Dunlap finds he is “more comfortable being vulnerable. I can prepare, but once you start (to perform) it requires me to be present on a whole new level, to be open to changing, even when it feels different.”

“If I don’t feel that natural movement, if I’m not fully doing the movement with the intention behind it, I know I’m not doing it well,” says Fadeley. Being present seems to have been an essential part of Brooks’ rehearsal process that has transferred to performance in a fairly spectacular way.

“There is a huge sense of camaraderie,” says Dunlap, “that we were all going through it together. Now, with the lighting and the costumes and a lot of walking back and forth, we have to connect together.” Connect they do, with each other and with the audience, in a ballet that seamlessly blends the demands of classical ballet technique with the innovations and emotional intensity of contemporary dance. Brooks’ expansion into the art of pointe work is an organic evolution of line and energy that seems like the most natural occurrence, elevating his stunningly original choreography into the realm of the ethereal.

The Harris residency, supported by the Jay Franke and David Herro Choreographer in Residence Fund, provides the named choreographer with financial support over a three year period to create new work each year, in addition to providing educational outreach in the community. 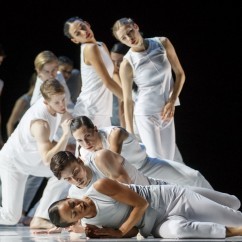 During his first year of the residency, Brooks created “Terrain” for Hubbard Street Dance Chicago, and “Thunder” for the advanced dance students of Chicago Academy for the Arts. The second year has brought the premiere of “Prelude,” set on his New York-based Brian Brooks Dance Company, to performances at the Harris, as well as the Harris-commissioned “One Line Drawn” for Miami City Ballet. Chicago audiences can look forward to seeing “One Line Drawn” when MCB returns to the Harris this coming November. 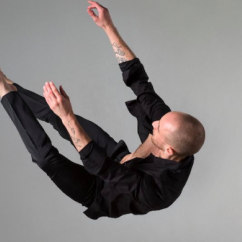