Being in two (or five, or twenty) places at the same time might begin to approximate what it feels like to experience “Tesseract,” by filmmaker/visual artist Charles Atlas and choreographer/dancers Rashaun Mitchell and Silas Riener (7:30 PM, through Saturday, Museum of Contemporary Art). It also invites its audience to see the possibilities of dance as one element of a larger canvas. But first, put on your 3-D glasses!

The dancers looked touchably real, and yet when I lifted my 3-D glasses, they dissolved into a flat blur. Obviously much more fun with the glasses on!  When one of the female dancers grew to giant proportions and floated out past the proscenium to hover over the first few rows of the audience, I knew I was in for quite a ride.

‘Tesseract” is one of several performing arts events presented in conjunction with the Museum of Contemporary Art’s exhibit, “Merce Cunningham: Common Time.” The exhibition showcases Cunningham’s multidisciplinary projects, exploring, as Cunningham described, the “underlying principle that music and dance and art could be separate entities independent and interdependent, sharing a common time.” Mitchell and Riener were both dancers in the Merce Cunningham Dance Company. Atlas served as Cunningham company's filmmaker-in-residence from the early '70's through 1983. 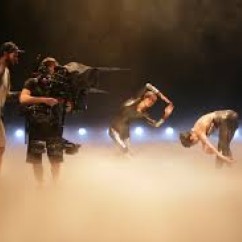 Atlas’s stereoscopic technology catapults dance, film, and visual art into the fourth dimension, the cube within the cube, and makes up and down relative to where you happen to be at any given moment in the time/space continuum of inter-connecting geometric planes.

Playing fast and loose with vantage point and perspective, the camera puts you where it wants you.  The two one-hour segments shake up perception with reality-bending imagery, the first segment recorded on film in three-dimensional stereoscopic vision (hence the need for 3-D glasses), the second performed live on stage, a magenta-clad camera man choreographed into the dance.

In part one, astounding in its visual and sensory impact, the technology drives the overall design, where dance is the brushstroke on the canvas but the camera supplies the paint and painter.  Atlas directs and edits the film journey of seven dancers through a series of other-worldly  landscapes, each a different chapter in his science fiction epic. Mitchell and Riener’s choreographed sequences mirror the texture and linear design of each landscape. Film technology manipulates the bodies, transforming the space with variables of size, tempo, depth, and physical proximity.

The first chapter opens on a black and white landscape of painted panels at different depths of the stage space. The dancers, in white with pockets of black rectangles, have black rectangular eye sockets and move in patterns that mirror the design of the panels. The dancers’ geometric moves activate the illusion of movement on the scenery to form a fascinating unity of motion and stillness, with dancing bodies appearing from within the scenery and dissolving into it.

Another landscape has a 3-D set of green, blue, orange, yellow and red cubes. The dancers’ matching colors and movement create a moving synthesis of the set, amplified  by their multiple projected  images, their rainbow-colored limbs forming a psychedelic circus of movement superimposed over them. 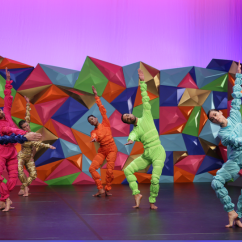 A moonscape sprouting a garden of cones, cubes, tetrahedrons, cylinders, and spheres has dancers navigating the shapes, sporting mini 3-D tumors of the same shapes growing from the skin of their unitards.

The climactic chapter takes place in a forest of cellophane ropes where Riener and Mitchell, wrapped in rope corsets and nude jockstraps negotiate intimacy, the only segment where relationship forms the context for movement. A brief interlude of 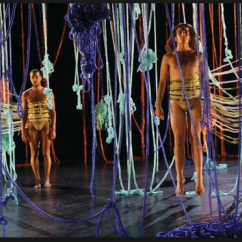 Part two, less striking visually and conceptually, focuses on the geometry of the human body in motion. Live action on stage drives the technology, playing out in  long linear moves danced in a steady-state dynamic. Seemingly arbitrary combinations of running, turning, stopping, and jumping describe geometric paths across the stage. Live video-feed is projected simultaneously onto a scrim suspended across the proscenium. You are experiencing the dance, the dancers, their onstage cameraman, and the projected images he captures all at the same time. The effect is a little like a hallway of slanted mirrors, where you can’t focus on one single image without another popping up within it and within that. Fractal multiples recreate themselves on the scrim, sometimes at dizzying angles or upside-down, rendering one set of dancers on terra firma and their floating dopplegangers dancing on the ceiling.

Accompanying all this activity a vague drama builds to the rhythmic sound pattern of bare feet running and stopping, turning and running. Techno-magic space swallows images and regurgitates them. One gulp and they are gone, or not. In a heightened ending, Mitchell breaks out from the group in an emotive solo that is reabsorbed into the anonymous non-expression of “pure movement.” Part two overstays its welcome with repetitions of movement and video tricks that go nowhere new. The steady drone of Das Esa’s electronic sound-scape vibrates to the core, atmospheric in its service to the antiseptic aura of the choreography.

Taken together, “Tesseract” is a unique and provocative experience that alters conventional expectations of perception and opens up a whole new medium for multi-disciplinary art.

For details and tickets, go to seechicagodance.com, and click on "Upcoming Events."

EDITOR'S NOTE: Calling All Writers--Share Your Story! SeeChicagoDance invites YOU, our readers, to submit personal essays and stories about any aspect of dance. Selected submissions will be published throughout the month of April. For submission guideleines, see Audience Architect's "Community News" or contact editor@seechicagodance.com. --LCS