After 50 years, Shirley Mordine still "hopes you're moved" by new and reimagined works at Links Hall

This Friday and Saturday at Links Hall might be our last chance to see a Mordine & Company Dance Theater performance, at least for a little while. Celebrating their 50th anniversary season, this contemporary company founded and directed by the legendary Shirley Mordine, has put together an evening of performance featuring six works. Three pieces are remounts or “re-imaginings” of repertory that find new relevance in today’s socio-political climate, while the other three are new creations by company members mentored by Mordine. After this weekend, the self-proclaimed longest running contemporary dance company in the Midwest will take a well-deserved break so Mordine can spend some time smelling the proverbial roses.

Remarkably, most of us in the Chicago dance community have less than three degrees separation between our current dance-life scenarios and Mordine’s distinguished career. That’s how well-steeped her influence is on the dance landscape—particularly in modern/contemporary dance—in Chicago. Mordine founded the Dance Center of Columbia College in 1969, establishing a robust dance curriculum for students in the college where no such program existed before. Just five years later, she established the Dance Center's presenting series, which became one of a few essential venues for national and international dance companies to perform in the Midwest. She did all of that and still found time to choreograph, perform and manage a company of her own. Did I mention she was a single mom at the time, too?

While I’ve been aware of Mordine’s impact on the Chicago dance scene for years, I just recently realized that I knew next to nothing about what makes her tick as a choreographer. I sat down with Mordine to discuss her upcoming show and the juicy stuff that matters most to her about dance.

First and foremost, Mordine values the properties of good theater: excellent performances, an energetic exchange between audience and dancers, well designed costumes and lights, great music and a sense of passion. “All my life I’ve thought of myself as interested in theater as I am dance,” Mordine explained. “Dance is theater. It’s a part of theater. It’s [something about] the point of view, the focus of it…it’s you and me and not necessarily what’s going on in my head that matters.” 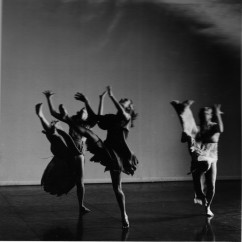 "Three Women" in 1975. From left, Shirley Mordine, Carol Bobrow and Jan Erkert, photo by Charles Osgood While she is less interested in work that relies too heavily on the intellect, she’s also not particularly invested in movement just for movement’s sake. For Mordine, there has to be something deeper in the equation.

“Maybe that’s my connection with the early contemporary choreographers; [their work] was about something. It wasn’t just about being an amazing mover or explorer. There was a concept behind it. I feel that way about any art form. I want to sense why it’s there. When artists don’t venture into revealing or exploring that, I don’t understand why they do it. “

“I think it’s concept and physicality that get connected, not one without the other," she continued. “Usually I find two elements that are almost combative or in contrast with one another that create an interesting concept. But I like it to be something that really has the potential for passion and commitment. And at the same time, I like to push the edge of what’s possible in the form itself. I really need to see the idea and passion behind it.”

Passion in performance is something many of us value, but is tricky to calibrate. A poignant moment on stage can slip into melodrama if we aren’t careful (unless, of course, melodrama is what we’re after). But recently, after a good decade or more of pervasive irony and cheekiness among post-modern and contemporary choreographies, it seems that dance makers are trending back to the realms of deep sincerity, honest excavation, and yes, passion. It’s no surprise that Mordine is finding relevant context today for some of her older works. Our society seems to be craving profound reflection and contagious action, a perfect recipe for dance.

After 50 years, Mordine is still asking, “What’s moving you?” But to answer that question with rigor, and to answer it in the context of a studio or stage year after year is no easy task.

“It’s hard,” Mordine said. “It’s really difficult because you have to develop deep contact with your soul, your background and your experience.” But the challenges of working in this way haven’t stopped her productivity over the years and she gives much credit to her dancers for their collaboration.

“I’m ultimately a craftsman…I never choreograph in the sense that I say, 'do this, do that,' literally setting something. I really try to get the dancers to become disciplined about responding back and forth so that the work is made in their voice. My dancers are wonderful, inventive movers. It is a collaboration and that is always exciting.”

What would she like us to take away from her performance this weekend? “I hope you are moved,” she simply said.

And then, “If you’re not, do something that moves you.”

Spoken like a lifelong artist and educator. Congratulations on 50 years!

Mordine & Company Dance Theater performs May 17 and 18 at Links Hall, 3111 N. Western. Tickets are $10-40, available by clicking the event page below.