Art, joy and care for the dancer have been costumer Rebecca Shouse's top priorities

This is a love story. A romantic love, a love of design, a love of theater, of dance, of people, of Chicago — and a city’s love for a woman who has dedicated her life to enhancing the fabric of its arts and theater scene one stitch at a time. Rebecca (Becca) Shouse, actor, designer, costumer and caretaker, reflects on her career as she moves into a new phase of her life. Although her first love is acting, Shouse is best known in dance circles for her work at the Joffrey Ballet and Hubbard Street Dance Chicago (HSDC). She enjoyed being behind-the-scenes and found a home in the dance community. “I’ve always loved dance,” she said in an interview. “It’s the greatest thing to be backstage watching those amazing artists.”

Shouse grew up in Kentucky in her parents’ flower shop, finding out early she had talent in and a love for design. In high school, she joined the speech and theater teams. She began performing in summer stock at Morehead State University during her junior year, eventually receiving her bachelor’s degree in theater. “I always did both acting and costuming. I went back and forth,” she said. “It was a small department, so we had to do everything. We learned how to make lighting instruments out of the big cans of green beans… by hook or by crook. I used to dye in metal trash cans. I would steal them and tie-dye all these robes and then put them back.”

College was also where Shouse met the love of her life, fellow actor and production manager/lighting designer Greg Etter. “I took care of my father when he was ill, from the age of 12 until I went off to college,” she said. “That taught me how to take care of people and that’s the best talent in my life.” Her father passed away during her freshman year of college, but the skills Shouse absorbed would be needed again and again throughout her life. Etter, her partner for 33 years, died in 2016 after a long battle with cancer.

After receiving an MFA in acting from Western Illinois University, where she traveled with their theater company (“It was a paid acting gig.”), and an MFA in costume design from Purdue University (“I needed to learn how to draw.”), Shouse toured with Etter as “a very overqualified” wardrobe mistress for a children’s theater so they could stay together and earn enough money to move to Chicago. The couple finally moved to the Windy City in the middle of a snowstorm in January, 1993.

Shouse immediately began working gigs at local theaters including Raven Theatre, Lifeline Theatre and the Goodman Theatre. It was at Goodman where she received an opportunity that would have her working for two decades with Chicago’s top dance companies. A call came into the costume shop and Shouse overheard her colleague suggest her for a job. It was the Joffrey. “Gerald Arpino (late co-founder and former artistic director for the Joffrey) and I hit it off immediately,” she said. “It was a great job for me. My skill set was ideally suited for it. You’re doing everything. You’re backstage and you’re taking care of people.” 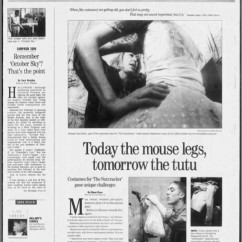 In 1999, the Joffrey Ballet's wardrobe department was featured for its efforts to reboot its "Nutcracker" costumes, which were more than a decade old at the time. "I had never seen brass zippers erode," Shouse said of the well-loved tutus she restored. The ballet was retired in 2015. (Clipping from Chicago Tribune, Dec. 9, 1999) Shouse’s years at the Joffrey (1997-2004) came with working on major ballet productions including “The Nutcracker” and “The Taming of the Shrew.” She even had a small cameo role in the movie “The Company.” One of the highlights of her time there was an international tour of “Billboards” at a Greek amphitheater in Turkey. Etter had taken her to see the ballet for Valentine’s Day the year before she started at Joffrey and it has a special place in her heart. Other memories include cutting a male dancer out of boots after he broke his ankle and crawling on stage to rescue a fallen dancer in “Waltz of the Flowers.”

“[Becca] genuinely cares about every person for whom she creates and makes costumes, as well as their well-being,” said Joffrey dancer Joanna Wozniak, who joined the Joffrey in 2003.

Shouse’s tenure at Joffrey was during a tumultuous time for the company when there were myriad staff and leadership changes; in fact, she worked for no less than 10 executive directors. Her resume states she “survived” seven seasons. “During that period, they were firing everyone. I always knew at some point it would be me,” she said. Always nimble, Shouse worked a few freelance jobs and then landed at HSDC in the fall of 2004, becoming wardrobe supervisor. It turned out to be a perfect fit.

“Becca’s specialty was that she cared,” said former HSDC artistic director Glenn Edgerton in a phone call. “She was the mother of Hubbard Street.”

HSDC brought new opportunities and new challenges. “I was brought in specifically to implement a costume shop where their things could be built,” said Shouse. HSDC also had an aggressive touring schedule, so she was on the road and managing the shop back in Chicago simultaneously. Eventually, wardrobe for the second company, HS2, also fell to her and in 2010, Shouse came off the road and stayed in-house. Coming from the intricate tutus and tunics at the ballet was a good warm up for some difficult contemporary designs including creating a boat costume for the children’s ballet “Harold and the Purple Crayon” and sewing a dancer into a seven-sided cage. “Becca was always present, armed and ready for any situation. She saved countless embarrassing moments for the dancers from ripped pants or a torn strap. Becca would always stay calm, stitch the issue and get the dancers back on stage for their next entrance,” Edgerton said.

After 13 seasons with HSDC, Shouse joined the local wardrobe union (neither Joffrey nor HSDC was willing or able to employ a union wardrobe supervisor). She went back to the familiar, taking stitching jobs with Goodman and the Lyric Opera. “I liked working those jobs,” she said, “just sewing and having the feeling of the cloth and creating. I wasn’t in charge of anybody and I didn’t have to solve the problems.”

The pandemic, of course, put a halt to all of it. So, what’s next for Shouse? She eventually plans on moving back to Kentucky, but will first spend some time being a nomad, hopping from place-to-place and staying with friends and family. “It’s an improv. I’m just going to go on tour,” she said. “The whole world is in mourning (due to the pandemic). It has made me seek joy even more. I’m concentrating on that. Because what else do we live for? Art and joy.”