Auditorium Theatre Star Of Its Own Show

The star of the show was the historic Auditorium Theatre, the golden-hued palace itself, celebrating the 50th anniversary of its restoration and re-opening, but a star-studded program treated its audience to a glittering array of virtuoso dance that did its stage proud.

The theater, designed by Sullivan and Adler and completed in 1889,  was dramatically front and center throughout the night in stunning life-size drawings of the building and its interior spaces projected across the entire span of the stage, establishing both a frame for conveying the history of the Auditorium Theatre, and a unifying theme as scenic backdrops for the evening’s 13 separate acts. 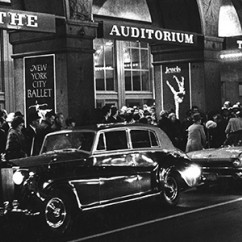 As the curtains opened, a projection of the hand-drawn Auditorium proscenium and stage echoed its real-life model, a theater-within-a-theater. Rows of empty seats on stage, their backs to us, faced the projection.

A clever prologue saw an on-stage “audience” of chic theater patrons strolling in to take their seats.  A video montage, projected onto the stage-within-a-stage, recreated all the excitement of opening night in 1967, with excerpts from New York City Ballet’s performance of George Balanchine’s “A Midsummer Night’s Dream,” starring Edward Villella and Suzanne Farrell.

At its close, the on-stage audience filed off, all but one. In a dramatic reveal, an elegant older gentleman turned slowly toward us and smiled with the unmistakable warmth of Edward Villella in person, here as honorary co-chair of the 50th gala celebration to welcome us, and to reminisce about what it was like on that dazzling historic night fifty years ago.  “I had danced in the greatest theaters all over the world,” he said. “I’d danced in Paris, London, China, Russia, New York; but I’d never danced in a theatre like this!” (Co-chair Suzanne Farrell, spoke in absentia via video.)

This theatrical construct created an imaginative link between 1967 and the present, and avoided what could have played out as an extended variety show of disconnected solos, duets, and one ensemble piece. Instead, it knit together an integrated presentation, carefully-curated by Auditorium Theatre CEO Tania Castroverde Moskalenko.  The  creative team that realized this visual spectacle combined Frédéric O. Boulay’s projection designs with animation by Anastasia Victorova. Historic video footage, subtitles, and voice-over narration interspersed live performances with historic details that put each dance offering, and the companies performing them, in historic context. 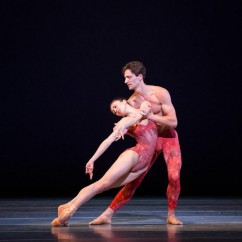 In between we dined on a sumptuous Balanchine retrospective with New York City Ballet’s Megan Fairchild and Daniel Ulbricht’s playful interpretation of “Tarantella” (1964), Michael Cook and Natalia Magnicaballi of the Suzanne Farrell Ballet in the poetic “Meditation” (1963), and the “Chaconne” pas de deux (1976) performed with precision and flare by Ballet West’s Emily Adams and Adrian Fry. 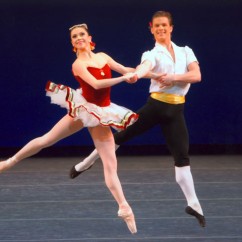 In a nod to Pavlova’s 1889 Auditorium Theatre opening night performance, Liudmila Konovalova of the Vienna State Ballet gave us a poignant rendition of “The Swan,” a harbinger of modernity choreographed by Michael Fokine in 1905. And Youth American Grand Prix winner Madison Penney’s precocious solo performance of the variation from Perrot and Petipa’s “Esmeralda” (1886) reminded us that nineteenth-century ballet capitalized on pure and unabashed technical showmanship, which this young lady has in abundance. 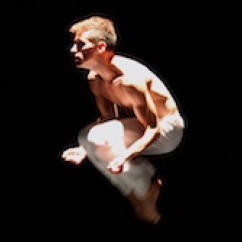 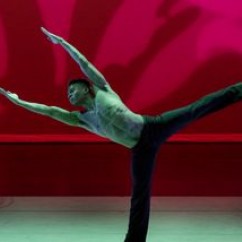 Moses Pendleton”s “Millennium Skiva”  (2012)  put MOMIX’s Todd Burnsed and Nicole Loizides in moon boots attached to skis for some novel, silver-clad anti-gravity tricks. But the Act One closer, Hubbard Street’s excerpt from Crystal Pice’s “Solo Echo” (2012), the only ensemble piece of the evening, resonates beyond the bravura and flash, beyond the tricks and novelties and entertainments of the night, wonderful as they were, to a deeper place that doesn’t go away after you leave the theatre, get in your car, and drive home. It stays with you in the haunting eternity of snow falling always, and open mouths in silent scream, and hands reaching hands out and out but to what; in the domino of falling bodies and interlocking ams and the loneliness of humanity in the face of forever. 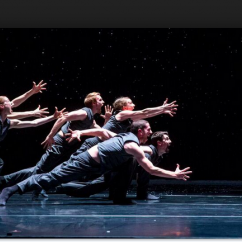