It takes sophisticated musicality, killer technique, and daunting rehearsal discipline for any ballet company to carry off George Balanchine’s “Serenade” (1934), his first ballet composed in America.  That the young dancers of the Ballet Chicago Studio Company not only carried it off, but gave an authoritative, inspiring rendering worthy of this 20th century masterpiece is cause enough for celebration in a program that delivered one delight after the next.

The special care and nurturing of both dancers and choreography, under the artistic direction of founder Daniel Duell and associate director Patricia Blair, was in abundant evidence throughout the evening of mixed repertoire.

“Serenade” made for a perfect opener to Ballet Chicago’s 20th anniversary performance at the Harris Theater this past Saturday, showcasing the brilliance of Balanchine’s early choreography, whose artistic legacy has fueled Ballet Chicago’s existence since its inception in 1987. 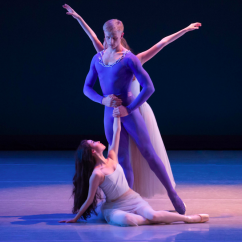 Throughout, the stage was awash in lush movement, the 24 women in gossamer calf-length white gowns, the six men in long sleeve blue unitards. Kaleidoscopic group configurations form, dissolve, and reconfigure in contrapuntal precision with the music, a Balanchine hallmark that demands not only hair-trigger accuracy but the core body energy to propel the compelling rush of Tchaikovsky's monumental "Serenade For Strings." Port de bras was especially sensitive to the musical nuances of Tchaikovsky’s phrasing, melodies, and orchestrations.

Three outstanding solo women—Dana Coons, Emily Fugett, and Nina Montalbano—darted in and out of ensemble symmetry with light-as-air leaps, intricate footwork en pointe, and breathy extensions. The dancers’ remarkable maturity showed lyric expansiveness that wed music to space in both group and duet sequences, with impressive partnering from Ethan Mazak and Brenton Taft.

While Ballet Chicago’s impeccable ensemble work in “Serenade” illuminated the beauty of Balanchine’s mass unison patterns, Frank Chaves’ wondrous “Ascension” (world premiere), highlights the individual artistry of two of the company’s stellar young performers, Dana Coons and Ethan Mazak .  Set to a commissioned score by Josephine Lee and performed live on stage by Lee at the piano and cellist Meena Cho, “Ascension” is nothing short of a lyrical rhapsody of movement and music. 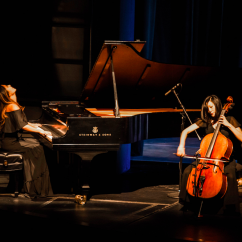 Josephine Lee and Meena Cho  Chaves captures the tension between the piano ostenato and the soaring cello melody in the elusive interplay between the dancers. Coons, in costume designer Jordan Ross’s shimmering gossamer  gown, is an ephemeral vision who slips through Mazak’s arms like an apparition. Chaves’ first work in the classical ballet idiom en pointe  blends modern movement invention with the ballet idiom, brilliantly capturing the fragile humanity of longing and loss between the two dancers. She, in her own spinning world, lights occasionally in his arms to be tossed into the air, flipped and retrieved in breathtaking up-side down catches. He, at once embracing and lamenting his unattainable love, holds her only to let her go. The elegance of piano and cello on stage balance the dancing couple both visually and musically in an absolutely gorgeous and boldly unsentimental marriage of music and dance.

Balanchine’s influence radiated throughout resident choreographer Ted Seymour’s two contrasting offerings:  an excerpt from “Fragile, This Side Up” (2007), and “Secrets de Printemps” (2016). “Fragile” uses asymmetrical body impulses and modern geometrics to create an erratic, rhythmic universe, set to the metallic sound effects of music by Steve Reich and Alva Noto. Here, Seymour’s movement reflects the layered rhythms of the music in abstract body shapes, a hand circling the head and contorting the torso, most striking in Margaret Nelson’s stark rectangles of light. The challenging modernity adds a different note to a program whose greatest strength lies in its more classically-grounded work. 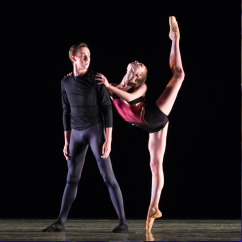 “Secrets,” set to Ravel’s orchestration of “Le Tombeau de Couperin,” takes a cue from Balanchine’s innovative use of complex group patterns to create visual interest while showcasing the accomplishments of several different tiers of performers, from the most accomplished pre-professionals in impressive solo turns and duets, to the most charming baby ballerinas from Ballet Chicago School’s junior division.  From the most technically accomplished soloists to the youngest ensemble performers, musicality, the use of breath, and lyrical flow propel the movement with energy that pays attention to   phrasing.  No one here is “just doing the steps,”  but it’s especially exciting to see dancers like Dana Coons and David Riley in a burst of technical panache and artistry that would light up the stage of any professional company.

Duell’s revival of his “Ellington Suite” (1987) made for a rousing program closer. Set to Ellington’s symphonic jazz elegy to the Mississippi River, this suite of five dances begins with a hint of 50’s jazz infiltrating flashy brisés-volés, spot-on double tours, and spectacular leaps, and builds to full-blown boogie-woogie en pointe. Emily Fugett is superb in her solo turn in "Invocation," while Grecia Delgado and David Riley, who must have pogo-stick springs in his legs, hit their stride in the technical tour de force, “Delta Duet.” The non-stop energy and sassy fun of Duell’s tribute to Ellington give Ballet Chicago a chance to show off its chops with high-spirited high-jinks and a dynamite finish to a platinum anniversary polished to a shine. 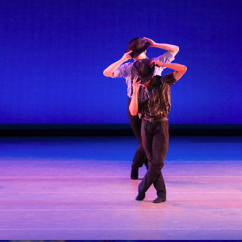