“Dance for Life” means many things to many different people, but for Chicago, it means an extraordinary night of dance. For this dance writer, it’s the single most wonderful night of the year. And you won’t want to miss it, because each year is unique, this year being no exception. (7:30 PM, Saturday, August 18, The Auditorium Theatre)

To the audiences filling Roosevelt University’s landmark Auditorium Theatre year after year, “Dance for Life” means getting to see an amazing cross-section of stellar dancers in performances by a cross-section of Chicago’s best professional dance companies in works by world-class choreographers. 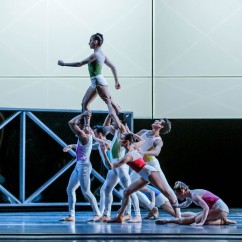 The Joffrey Ballet in "Body of Your Dreams" 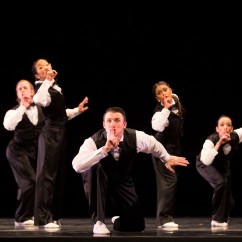 “Dance for Life,” (DFL) now 27 years strong, continues to flourish, expanding its scope and breathing new life into what has grown to become a firmly established Chicago institution.

Inspired by need and compassion, and faith in the potential for a dedicated community of dancers to come together to help each other, Keith Elliott, then a dancer with Joseph Holmes Dance Theater, and Todd Kiech began planning the first “Dance for Life” in 1991. Enlisting administrative support from JHDT’s Harriet Ross and Hubbard Street’s Gail Kalver, the first Dance for Life in the summer of 1992 sold every seat in the house at the Organic Theatre. Since then, “Dance for Life” has raised over 5.5 million dollars for The Dancers’ Fund, the AIDS Foundation of Chicago, and 24 other AIDS prevention, treatment and advocacy service organizations. In response to the changing needs of Chicago’s dance community, and evolution in the nature of HIV/AIDS prevention and treatment, “Dance for Life” incorporated as a not-for-profit organization, Chicago Dancers United. The Dancers’ Fund now provides assistance to Chicago dance community professionals facing critical health issues that affect their ability to work. 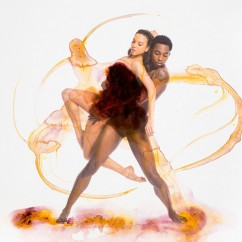 This year, new innovations have included “Day of Dance,” which provided a full day of dance classes free of charge for 35 high-school aged dancers from near and far, taught gratis by Dance For Life participants, and Sherry Zunker’s “Be Moved,” class, both held at the Lou Conte Dance Studio. Proceeds from Zunker’s class were donated to Chicago Dancers United. In addition, CDU’s year-old affiliation with Howard Brown Health assures referrals to appropriate health care professionals for needy dancers on an affordable sliding scale from cost-free to pay as you can.

To the dancers performing in “Dance for Life,” it means a chance to connect with each other, both on stage and back stage, to bond artistically, to collaborate, and most importantly, to create a caring, responsive community that unites them in a humanitarian goal.

Joshua Blake Carter was a dance major at the University of Arizona in 2008 the first time he saw “Dance for Life,” after his second summer on scholarship with Giordano Dance Chicago. “It changed my life,” he said. “It was very cool, this whole thing about community. When I was in high school, coming out as a gay man, people would say, ‘don’t you know you could get AIDS?’ There was this stigma. Dance for Life is about education that leads to eliminating that stigma.” Seeing “Dance For Life” was the inspiration for his senior dance project, and launched a whole campaign for the Arizona AIDS Foundation. Carter’s very first performance as a company member of Giordano Dance Chicago was in 2010, in the “Dance for Life” 20th Anniversary documentary, filmed during the last year of DFL’s residency at the Harris Theater. Fittingly, the final performance of his dance career was in last year’s “Dance For Life.” This year, he stages his piece, “Kim,” for Nomi Dance Company, making its premiere appearance in DFL. “We have something so special with The Dancer’s Fund,” Carter said. “Health care is still a super-huge struggle. We have something (in The Dancer’s Fund) that allows us to take care of each other. 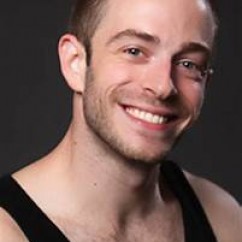 ”To dancers struggling with health issues, “Dance for Life” means feeling that care in a tangible way through The Dancers’ Fund. This year, the “Dance For Life” concert dance evening will include video testimonials from two prominent Chicago dancers suffering from serious health crises. As long-time participants in “Dance for Life,” and now recipients of The Dancers’ Fund, they share their stories and express their gratitude so that the larger community can grasp its profound significance to the individual people it serves.

To the different companies and choreographers represented each year, it means an opportunity to showcase their work to a much larger and more diverse audience than they would typically reach during their regular season performances. Over the years, performing in “Dance for Life” has been a crucial turning point for countless companies, expanding their audience base, increasing fundraising capabilities, and gaining entrées to venues like the Auditorium Theatre, which they could previously only dream of accessing. New companies this year include Nomi Dance Company and Hanna Brictson and Dancers.

Cerqua Rivera Dance Theatre returns to DFL after a 21-year hiatus, performing excepts from choreographer Sherry Zunker’s “Between Us” (1017).” Set to an original score by Joe Cerqua, CRDT’s co-founder, the piece is performed by 11 dancers and two musicians performing live on stage. Speaking of his first appearance in DFL in 1997, CRDT Artistic Director Wilfredo Rivera says being in Dance for Life gives one “an amazing feeling of validation,” to be included in the company of Chicago’s best. “The level of the dancers is inspiring,” Rivera says, “and each season there’s evolution. It’s a great opportunity to affirm what we’re doing.” CRDT integrates concert dance, original music performed live, and visual art. Rivera applauds DFL’s artistic direction of opening its doors to up-and-coming companies and all genres of dance.“It’s energizing for everyone!” 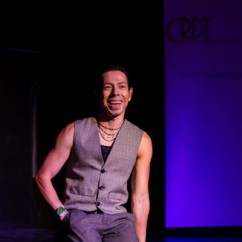 Nan Giordano, Artistic Director of Giordano Dance Chicago, was “stunned and elated, ecstatic!” to be named one of this year’s two “Dance for Life” honorees, along with Hubbard Street founder, Lou Conte. “It was quite emotional,” Nan said, “because when we were first invited (to be in “Dance for Life”) 27 years ago, it was a major thing, being an Evanston-based company, that we were being included in the Chicago dance community. It was a monumental step for the company.  My father (founding GDC Artistic Director Gus Giordano) was the first company director to put Chicago in the company name because he wanted the world to know we were from the city of Chicago. As an “outsider” company, their non-touring venues had been limited to small houses outside the city. After several years performing in Dance for Life, Giordano Jazz Dance Chicago, as it was then known, staged its first home series in Chicago at the Harris Theater on Easter weekend, April 10-11, 2004. 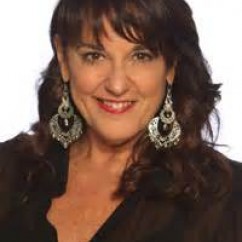 “It’s a full circle of life,” Nan Giordano said in a recent phone conversation with SeeChicagoDance, "and it makes everybody better for it. It can’t be just about ME, and it’s not just about Giordano. It’s about community. We want dance to be alive. ”When asked what’s changed for Giordano Dance Chicago’s participation in Dance for Life, Nan replied, “Everything! The monumental thing is that we have become an integral player in creating the fabric of the Chicago dance community.”

Nan, who celebrates 25 years as GDC Artistic Director, has taken her father’s vision of jazz dance to new heights. Her leadership has exemplified what her father stood for: artistic excellence, community inclusiveness, and collaborative spirit. Chicago Dancers United wanted to recognize Nan Giordano because of the impact her leadership has had on the entire dance community. 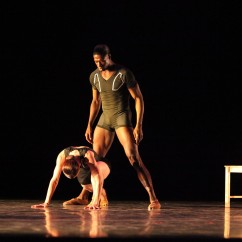 Giordano Dance Chicago in "Tossed Around"

“She’s amazing,” says Kevin McGirr, President of the Board of Directors of Chicago Dancers United. “Her resilience, her respect for the Chicago dance community, and the dance community beyond Chicago," made her a unanimous choice for the award. As was Lou Conte. “They were the first two names that came to mind. We wanted people to know what they have done.”This year Nan and Executive Director Michael McStraw wanted to do something different for “Dance for Life.” In a classic reversal, instead of drawing from more traditionally jazz-based company repertoire, GDC will perform an excerpt from Ray Mercer’s “Tossed Around,” which leans more toward contemporary and modern dance forms, while the contemporary Hubbard Street Dance Chicago revives “The 40’s,” Lou Conte’s signature oeuvre celebrating the 1940’s post-war jazz era.

Hubbard Street’s Lou Conte came to Chicago from a career on Broadway, teaching tap dance and Broadway jazz at The Ruth Page Center and coaching four enterprising students in borrowed studio space at 218 South Wabash. They performed at nursing homes and senior citizen centers. The group included Ginger Farley and Claire Bataille, who would become founding members of Hubbard Street Dance Chicago, named aptly for the street address of Lou’s first studio. From humble beginnings, Lou built the fledgling company from a mostly Broadway-style jazz dance ensemble to the world-class contemporary dance powerhouse it is today. 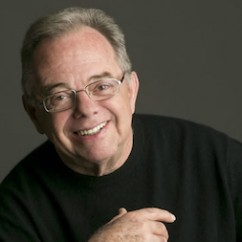 If you ask Phil Reynolds, Executive Director of Chicago Dancers United, what “Dance for Life” means, he will tell you about the abundant energy of the people who make it work—his board of directors, the “Ambassadors” core of tireless volunteers, and the incredible Chicago dance community that rallies around this unique humanitarian cause. As Nan Giordano puts it, “'Dance for Life’ is a win-win for everyone,” benefitting Chicago, Chicago dance, and Chicago’s incredible dancers, united one and all by “Dance for Life.”

"Dance for Life" takes place this Saturday, August 18th, 7:30 PM, at The Auditorium Theatre. For tickets, go to SeeChicagoDance.com, and click on "Calendar."