Brian Brooks sees movement from an uncommon perspective, and his Harris Theater premiere this week takes an especially uncommon view of falling. “It makes one’s head twist, the undoing of things,” he says in a recent phone interview with seechicagodance. “Prelude” takes on the reversal of energy flow, “retracing the points of initiation,” and exploring how the act of undoing manifests itself physically and psychologically through movement. With un-falling, “the physics is not intuitive.”

Poised to bring his second major work to the Harris Theater with two programs performed by his own Brian Brooks Dance Company, Brooks unveils “Prelude," as part of his three-year Harris fellowship, supported by the Jay Franke and David Herro Choreographer In Residence Fund. Jay Franke is a trustee of the theater. 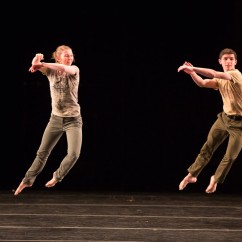 "Torrent"  and “Division” (2014).  “The Exelon Family Series” (2 PM, Saturday, January 13) includes excerpts from “Prelude” and “Torrent,” which premiered at the 2013 Chicago Dancing Festival, of which Franke was co-artistic director, along with Lar Lubovitch.

The intensity and excitement of a creative tsunami infuse Brooks’ voice. Describing what it’s been like the past two years as the first-ever Harris Theater Choreographer-In-Residence, he muses, “The Harris has made me the busiest choreographer in the country!” While he sees himself basically continuing along the same artistic quest he’s been on, the residency has heightened the level of work he’s been doing, with seven projects going on simultaneously, four of them for the Harris residency. “It stretches me artistically, all the far edges of my artistry, what I’m doing and the types of people I’m working with.”  In addition to the Harris premiere with his own company this week, Miami City Ballet will premiere his “One Line Drawn” next month in Florida, co-produced with the Harris as part of the Choreographer In Residence fellowship. 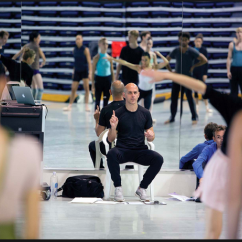 While networking is familiar territory for Brooks—he sees himself as an essential collaborator at heart—he relishes the opportunities the residency has given him for expanded collaborations with many different people from contrasting backgrounds—not only in the range of dancers, dance genres, and companies, but also designers and composers as well. “Prelude” features a commissioned score by Jerome Begin. Pianist David Friend will perform on stage with the eight dancers, while Begin will be manipulating electronics backstage. “Live music is a thrill,” Brooks says. “It amplifies what’s in the work." 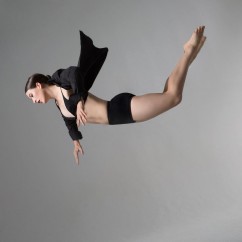 The Harris Theater Choreographer In Residence program provides generous funding, giving the named choreographer total artistic freedom to create over a three year period. The only expectation is that the work will be performed at the Harris at some point. “This is one of the few resident programs where a great portion of the funds go directly to the choreographer,” Harris Theater Executive Director Patricia Barretto explained. Brooks was chosen as the inaugural choreographer in residence because “Brian is amazingly talented,” Barretto said, on the cusp of a break-through. Franke and Herro wanted to give someone who was not yet fully established a chance to really flourish. When the fellowship was initially announced Franke described the fund as “an opportunity for the Harris to ‘invest’ in choreographers and cultivate a relationship with their work for our audiences. It will allow choreographers a chance to dig deep into their work while the Harris provides the venue and opportunity along with a long-term commitment to ideas they wish to explore. I see this fund as a catalyst for a choreographer to hone their craft further while allowing them the freedom to not stress about paying the bills.”

Brooks tries to explore a different physical concept in each work he creates. “The Harris residency has boosted that challenge,” he says. In the first year of his residency, he choreographed “Terrain” (2017) for Hubbard Street Dance Chicago, a lush movement exchange for sixteen dancers in a curvy iteration of the domino effect.  Working on “Prelude,” with his own company, he tried to challenge himself and his dancers in new and daring ways, distinctly different from the sweeping epic work he was creating simultaneously on Miami City Ballet, a classical ballet company. 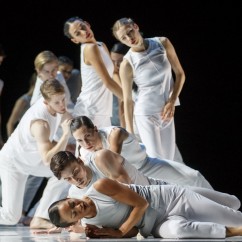 Early in the first year of his Harris residency, also as part of the Choreographer In Residence fellowship, Brooks worked with the advanced dance students of the Chicago Academy for the Arts, Chicago’s premier high school dance program and core arts education partner of the Harris Theater. Academy students participated in master classes with Brooks and attended an open rehearsal of “Some of a Thousand Words,” featuring Wendy Whelan. For the culmination of his Academy residency, he choreographed “Thunder” for the Academy’s repertory company, performed at the Harris in May of 2017. “That was the Harris Theater mission coming alive on our stage,” Barretto said. That mission includes presenting world renowned music and dance, supporting the Harris resident companies, and reaching out into the community with master classes, free tickets to Harris Theatre performances and other educational programming. Working on “Thunder” with the Academy students was a revelation to Brooks. Set to the street percussion of “Bucket Boys,” performed live, “the dancers were unrestrained. Seeing it performed, they took ownership. The methods and the work were extraordinary, the energy and the noise and the artistry a really spectacular project.” 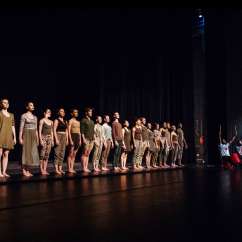 Chicago Academy for the Arts in "Thunder"

What’s in store for year three? Brian Brooks’ final year as choreographer in residence will include more educational outreach into Chicago’s schools, as well as a third major work of choreography, as yet to be announced. 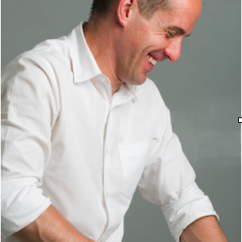 Summing it all up, Brooks said, “It’s exhilarating!… It’s amazing that we take these journeys, get the rug pulled out from under us, and then feel at home!” One of the great advantages of the residency is how stimulating it has been for him. “The common thread is it stays uncommon!” Lucky for us!