Cerrudo: From Sketchbook To Masterpiece in Grand Gallery Showcase

First of all, it was Hubbard Street, a company of superb dance artists with programming that never fails to enchant, challenge, and entertain. Add to that, it was to be Hubbard Street’s first season in 20 years at one of Chicago’s grandest theaters, a chance to see the company flex its muscles, so to speak, on a bigger stage in a venue whose historic architectural pedigree and ornate decor evoke the glittering elegance of a bygone era.  And, following Hubbard Street artistic director Glen Edgerton’s predilection for taking a full evening to explore a single choreographer’s work, we had the additional prospect of total immersion into the choreographic imagination of Alejandro Cerrudo, Hubbard Street’s first ever and only resident choreographer.

What I couldn’t anticipate was the stunning impact of this all-Cerrudo program, not only because of the brilliance and range of this young choreographer’s opus, but because of his careful cultivation of a program whose elements combined so organically that the whole became even greater than the sum of its delectable parts. This is not always the case in one-choreographer programming, which sometimes takes on the flavor of one continuous, evening-length piece.

Cerrudo’s one-man show inhabited the Auditorium Theatre’s grandeur with the pluck of youth and the evolving depth of mature artistry. Spanning the  evolution of his rich creative palette, the concise two-act dance exhibit united Cerrudo’s earliest etchings with up-to-the-minute large-scale canvases in an exhibition that showcased both his versatility and signature choreographic vision. 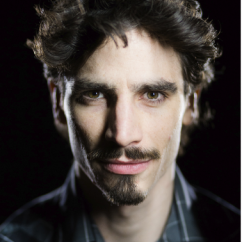 Just as we recognize early genius in the sketchbooks of master artists, so too can we detect the elements of brilliance building in increments, from “Lickety Split” (2006), Cerrudo’s first work for HSD, and “Off Screen” (2009), toward the rich composition and sophisticated manipulation of visual, spatial, musical, theatrical, and movement elements in “Silent Ghost” (2015) and “Out Of Your Mind” (world premiere).

Tracing the movement across an evening of four distinctively different works, patterns emerge. The passionate pursuit of what makes us human, what connects and separates people, ripples through all four pieces, with gesture that pays close attention to the subtleties of touch, and not touch.  A fascination and focus on the shape of bodies in space together, and the space between bodies and body parts pervades Cerrudo’s movement invention. Heads, arms, and legs navigate the negative spaces between elbows, inside the circles created by clasped hands, and around the contours of hips.

Sensuality, sometimes as subtle as the action/reaction of a head impulse and the minute contraction of a spine, is a hallmark of his style.  Cerrudo mixes in-your-face theatricality, subtle drama, and a beguiling, sometimes capricious infusion of mime in a striking combination of humor and pathos, lyricism and playfulness. Here is a choreographer who alternately laughs at and laments our all-too-human fallibility and exults in the sheer joy of the human body in motion.

And then there are the specifics.

“Lickety Split” began as a duet in Hubbard Street’s “Inside Out” Choreographic Workshop, which encouraged company dancers to try out their choreographic ideas on each other for informal public presentation. Former company director Jim Vincent saw promise in Cerrudo’s work and encouraged him to develop the duet into a full-length piece.

Set to the infectious blue-grass-inspired music of composer/singer Devendra Banhart, the piece exudes young love with a country feel. “Lickety Split” incorporates its seven dancers in a unique mimedance language of mutual courtship. Cerrudo uses both silence and Banhart’s songs to explore the tender overtures of affection between two people, the giddy joy of being drunk on love, and the comfort of togetherness. Mimed gesture expands into lush, full-group linear patterns. Clasped hands form hoops the dancers move through, breaking apart and enclosing one another in lyrical patterns that are at once slinky, sensual and sweet. 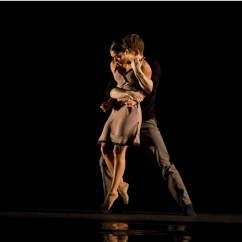 “Lickety Split” ended in a blackout. There were no bows. Instead, a spotlight drew our immediate attention to HSD dancer Rena Butler in an outrageously glittery jacket, pipe in hand, provocatively poised in a box seat suspended just to the right of the proscenium, much to the delighted surprise of the audience. Launching into a theatrical monolog with a fake Brittish accent and flirtatious manner, her over-the-top acting teased the crowd with a question: what is reality? Round-about, fairly verbose logic led to an almost diabolical proposition: dream yourself anywhere at any time, and create your own reality, and then dare to dream yourself here, now, in a dream which is not under your control, in which the unexpected may happen. I’m not entirely sure how, but somehow it followed that perhaps you are, in fact, God. 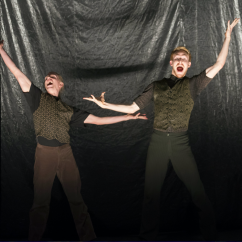 David Schultzand Florian Lochner in "Off Screen" The extended monolog, deliberately pretentious, and yet challenging as well, segued rather nicely into “Off Screen,” Cerrudo’s third work for the company, which takes off on music from period movies, their melodrama, and the contrasting realities they evoke. The movie drama of “Off Screen” unfolds in a world dominated by an enormous floating drape. Seven dancers in black gloves emerge from the obscurity of upstage darkness, another one of Cerrudo’s signature fabrications. Dancers manipulate the fabric prop to transform the stage environment for the several  discrete episodes of the piece, first a watery world of waves and undulating bodies, then a mylar backdrop for a whimsical duet that imitates the Bach-inspired music note for note with body twitches and an abstraction of everyday gestures that morph into a moving jigsaw puzzle. The drape folds upward on hooks and pulleys to create a molded cave ceiling for the group finale in a frantic group tarantella, the dancers mouthing the Italian lyrics with over-the-top drama. The dancers dissipated, and again the piece ended without bows. 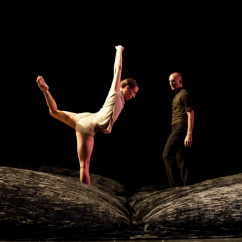 Kellie Epperheimer and Ben Wardell in "Off Screen"

Out of the upstage darkness, a lone figure emerged, dancer David Schultz dressed like Colonel Sanders or Samuel Clemens, bejeweled walking stick in hand. Moving directly downstage, he stepped across the stage lip and over a row of floor lighting onto the covered orchestra pit to deliver a second monolog, a repetition of Butler’s diatribe, but this in a fake southern accent, also deliberately pretentious and over-acted. As he retreated into the darkness and intermission, the words began to sink in. 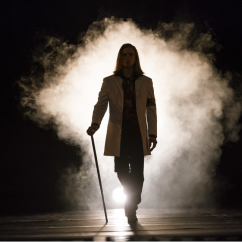 Act Two opened on an entirely different note, both musically and in movement, with “Silent Ghost,” originally created for the Aspen/SantaFe Ballet and here performed by Hubbard Street for the first time. The subtle structural and thematic cohesiveness of “Silent Ghost” gave the immediate impact of choreographic depth significantly evolved from Cerrudo's earlier works.

An exquisite elegy of love and separation, the movement hieroglyphics of arm gestures throughout “Silent Ghost” form an architecture through which the ten dancers enclose and navigate each other’s shapes, recalling Cerrudo’s earlier explorations of negative space.  Dancers again disappear and reappear in and out of the upstage darkness, but the duets and ensemble segments dissolve into one another through the darkness with an organic continuity that pulls the meaning of the piece together from beginning to end.

Piano accompanies a sensual male/female duet (Craig D. Black, Jr. and Alicia Delgadillo in a stellar performance) with the ambient sound effects of distant conversation and objects spilling onto the floor. She dips her head into the trough of his arms, slips from his grasp and through the shapes of his body.  He disappears, while she remains, undulating on the floor. Another woman joins her in a second duet, echoing the movement of the first, the two slipping through and from each other. The power and emotional intensity of their sensuality, understated and all the more deeply felt, contrasts the simplicity of the music, bringing every movement into stunning relief.

Balance defines the return of Black and Delgadillo in a third duet emerging from the cannon of fluid ensemble movement, their entanglements complex, intimate, and unresolved against the simplicity of a plucked guitar, until she retreats into Cerrudo’s beloved upstage obscurity, leaving her male partner alone in the aftermath of passionate intimacy and separation, heart-stopping in the restraint of its utter absence of sentimentality. 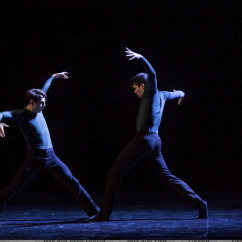 Kevin J. Shannon and Craig D. Black, Jr. in "Out Of Your Mind" The evening’s finale, “Out Of Your Mind,” begins with a voice-over of Alan Watts delivering the same text we have already heard twice, this time accompanying fifteen unison dancers in light blue, long-sleeve turtlenecks and dark blue tights. Their movements snatch individual words out of the space around them with imitative gestures: “God is the self, and you are that, only you’re pretending you are not.” A collective breath energizes the ensemble periodically dispersing into a series of mixed gender and same gender duets.  The monolog continues. Again a kind of movement Sanskrit creates their common body language as they link arms in a human double helix of sequencing molecules, undulating, twisting, in domino cascades. “You are the universe,” the voice intones, suddenly making sense as the dancers mouth his words: “and you are creating it at every moment.”  The visual spectacle of fifteen bodies conjoined in ingenious formations is breathtaking, but its impact goes beyond “Out Of Your Mind” to encompass the whole splendid night, unified by Cerrudo’s ultimate, ongoing act of creation. 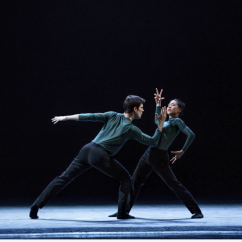 Michael Gross and Connie Shiau in "Out of Your Mind"