The past few years have not been easy for the Joel Hall Dancers and Center. The company moved its studios, moved locations from a pricey second floor studio in the heart of Andersonville to its current home occupying a storefront on the 5900 block of north Clark Street, and while this move led to the designation of Honorary Joel Hall Way by 48th Alderman Harry Osterman, it also meant less foot traffic and chronically empty storefronts for neighbors.

Hall has been transparent about the company’s struggles, but a Chicago Dance Month event on April 21 at his Edgewater studios wasn’t about any of that. Instead, a few dozen people gathered that evening to see Hall speak for an event called the Legacy Lecture, moderated by assistant artistic director Jacqueline Sinclair.

Hall’s is a legacy that includes honors like the Katherine Dunham Humanitarian Award, the On-Target Award for Marketing from the Arts & Business Council of Chicago, and profiles in two books about African Americans in dance. Hall has been named the YMCA Community Achiever of the Year, inducted into the Chicago Gay & Lesbian Hall of Fame, and in 2016, the designation of Honorary Joel Hall Way.

Sinclair’s approach to the talk was through Hall’s work, starting with his very first: “My Love.”

“It was about my love of dance,” said Hall, about the piece he choreographed while studying sociology at Northeastern Illinois University, as well as throughout his five-decade career. He then spoke of his upbringing in the Cabrini-Green neighborhood, and key influences in his life who encouraged him to pursue dance and attend college.

Hall told the story of how he and Ehrenberg first met: “I was out on the dance floor, twirling by myself,” he said, recalling the 1970s club scene in Chicago. Hall then rose out of his chair to give a demonstration of twirling, providing reassurance that, at age 69, yes, Joel Hall can still twirl. Not getting as enthusiastic a response as he expected, he gazed over his glasses with a half-smile. “OK?!?” he said, as the room erupted into smiles and laughter.

The discussion spent quite a while in the 1970s. Hall talked about the formation of the company and connections between his upbringing in Cabrini-Green and “Night Walker,” (1979), a dance noted by the Chicago Tribune as “a jazz hot piece set to Duke Ellington recordings that has become [and today remains] the company`s signature piece.”

The evening ended with a brief discussion of “Anja,” Hall’s latest evening-length choreographic effort, and a section from “Night Walker” danced by current members of the company. “Anja” was created in conjunction with Joel Hall Dancers’ 40th anniversary season in 2015, an exploration into African and Egyptian ideologies. Hall began with questions and curiosities about why Egypt is perceived as apart from the rest of the continent, and why Christianity has taken such a foothold in Africa even after colonizing nations left.

After more than 40 years and an exhausting list of accomplishments, Hall admitted that there’s no one way to make a dance. “I start with a song, a poem, an incident, or a life event,” he said, seated in the center of the main studio at the dance center bearing his name. “I will then move upon that.” He’s tried to figure out if there’s a formula, and found that each dance takes shape differently. “It always works out in the end,” he said. 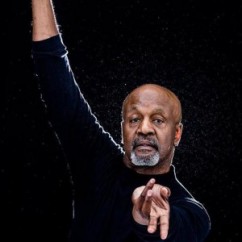 For Joel Hall, each dance begins with a story or idea, and ends with an outcome. Between idea and outcome is what he called the “pulse.” In a way, Hall’s career has followed a similar path. It started with an inner-city kid who followed his passions and left the streets behind, and, through the years, has arrived at so many outcomes. The “pulse” is the dancers, the audience members, and the community he’s created by inspiring countless individuals to engage with dance in one form or another. And that has always been Joel Hall’s mission: to provide quality dance instruction and performance to anyone and everyone who wants it.

Lauren Warnecke is the Dance Writer for the Chicago Tribune.