Last Friday I attended the Chicago Danztheatre Ensemble’s (CDE) production “Art In Response” at their resident space, the Ebenezer Lutheran Church in Andersonville.  Fortunately for me, I’m a person for whom Christian sanctuary spaces brings a certain amount of comfort and nostalgia. These spaces hold resonance and whether you have a positive, negative, or complicated association with church, the feelings are loaded. And that “loaded-ness” has an effect on performance.

Are the moments of reverence in church all that distinct from the emotional and visceral impact of a choreographed piece of art? What does it mean to situate your dance theatre in a former place of worship? How do you reconcile the fact that audiences will place their associations with this liturgical space, whether consciously or unconsciously, on your work? And how might that knowledge influence your creative process? Of course, creative work doesn’t have to respond to or engage with the ideology of its religious home—CDE doesn’t, or didn’t seem to—but are we, as viewers, supposed to pretend that the performance space is neutral in order to watch the work on its own terms? (As if “neutral” is ever a codifiable option). I’d be curious to hear CDE’s founder and executive director, Ellzabeth Adler, speak to these issues.

Whether or not CDE has a fundamental relationship with Christianity, their work is community minded. “Art In Response” presented four pieces, three of which centered around some pretty hefty themes: sexual violence, veteran suicide, and incarceration.

The night began with “i bet you think this dance is about you,” a brave solo choreographed and performed by CDE artistic director Sara Maslanka. Set to an instrumental rendition of “Will You Still Love Me Tomorrow” by George Cables, the piece included text (from “milk and honey” by Rupi Kaur) that alludes to an unwelcomed sexual encounter all while dancing a repetitive loop of clean-lined modern dance choreography. This work was followed by Adler’s “Unraveling Bill” (2006), a tribute and dance/theater enactment of the story of William Blake, an Iraq war veteran who took his own life and the effects it had on his loved ones. Complete with an American flag used as rope, blanket, and object of fury, the piece included characters in army fatigues marching around and doing dancerly push ups all while narrated by Bill’s sister (played by Adler) who recounts her brother’s story and describes her grief mostly while sitting atop the altar wearing a black negligee.

After a brief intermission—while we listened to some 90’s club music and donated to The Prisoners Revolutionary Literature Fund (PRLF)—the performance resumed with “HOPE” directed by Adler and performed with refreshing magnetism by CDE guest artists, David Goodloe, Carlos Lopez, Ben Locke, and Eric McCarter. Dressed in prison uniforms and reciting text derived from letters by incarcerated men, these men gave fully committed, riveting performances. With an effective scenic element of four black mesh scrims on portable rolling platforms, the actor/dancers were able to create multiple environments depicting cells and hallways that emphasized their physical and psychic experience with enclosure, barrier, and isolation. Although the sound effects were rather cheesy—exaggerated clanks and bangs of what I assumed were metal chains and industrial locks, not to mention a cartoonish god/master-type voice commanding them to “sit”, “stand”, and “move”— the energy and authenticity of the performers stole the show. They moved with effortless strength and grace around the stage, sometimes hanging from the scrims or circling one another; weaving seamlessly between movement and text. With a less professional cast I would have thought this piece dangerously close to those didactic Afterschool Specials, but the power and confidence with which they executed lines like “I feel unloved!” (shouted effectively by Goodloe) or “We are all drowning!” (by Locke) made me absorb the sincerity of their message. Hopefully these guest artists will be invited to join future CDE productions, not just those relating to the imprisonment of men of color. 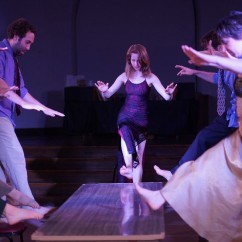 The final work in the evening was a light-hearted piece entitled “Chapter 3: The Dinner Table” devised and choreographed by Maslanka with the CDE ensemble. Perhaps it was an odd choice to follow “HOPE,” with a predominantly white cast in formal attire whimsically playing around a dinner table, displaying a carefree and potentially wasteful use of their freedom. Or maybe this was just the point that Adler and Maslanka were trying to illustrate; the juxtaposition between the haves and have-nots. Nevertheless, Maslanka demonstrated solid skill in moving this cast of seven around the stage in interesting and engaging ways. The antics—dance phrases interspersed with jumping on and off chairs, sliding around a table, pretending to cook on the altar upstage, testing each other with speed and wit—were fast-paced and entertaining. My eyes bounced from one corner of the stage to the other not always knowing where to look and happy to have a choice in the matter. The work was well rehearsed and enthusiastically performed. That said, it would be nice to usher Tanztheater into the modern day. We can start by re-examining the convention of hyper-gendered, class-oriented evening wear as costume design. I appreciate seeing Maslanka’s work as a descendent of the Bauschian lineage, but do we really need to keep cis men and women relegated to shirts & ties and floor-length gowns (respectively) to honor the form? Let’s see what else there is, shall we?