A puppet glides across the stage, and despite knowing it’s just cloth, wood, and maybe some string, the sight—and dynamic storytelling that comes with it—captivates audience members.

Running Jan. 17-27, the Chicago International Puppet Theater Festival connects audiences with a wide array of contemporary and traditional puppet theater performances from around the world. In its third year, the festival aims to shake up conventional live performance by connecting audiences with puppetry that both challenges and entertains.

Blair Thomas, festival founder and artistic director, began the first Chicago International Puppet Theater Festival in 2015 as a collaborative effort with multiple presenters and venues across the city, including Links Hall, the MCA and the Art Institute of Chicago.

Aware that up until then there was no major international puppet festival in the United States, Thomas said he aimed for the festival to cultivate an engaging puppetry presence both on a local and national level.

“In Europe there are little festivals and large festivals all over the place, and the result of that is people get to perform a lot, practice a lot, and the aesthetic of puppetry is more advanced than the United States,” said Thomas. “I wanted to create that influence in the U.S.”

Over the past four years, this influence has grown to include 24 different performances spanning 19 Chicago venues by puppeteers from 11 countries total.

New in 2019 is The Festivals Exchange, a program that brings in puppet theater acts from international festivals and sends U.S. puppeteers abroad. This year, three artists from The World Puppetry Festival in France will perform as a part of Chicago’s festival, and three Chicago puppeteers will perform at the French festival in September.

All of this is supported by what Thomas calls a renaissance for puppetry. No longer confined to its own stage, puppet theater is often integrated with other artistic disciplines. International puppet festivals like this one happening in Chicago create an awareness and exchange of practices among puppeteers from around the globe.

“We are very aware of the work of our colleagues in other countries,” said Thomas. “Developments in the form are aesthetically advanced—the corporations, the kinds of puppets. The mixtures of traditional styles with new experiments and practices is the norm.”

Audiences can experience the effects of this blending of puppetry techniques through the festival’s range of performances. 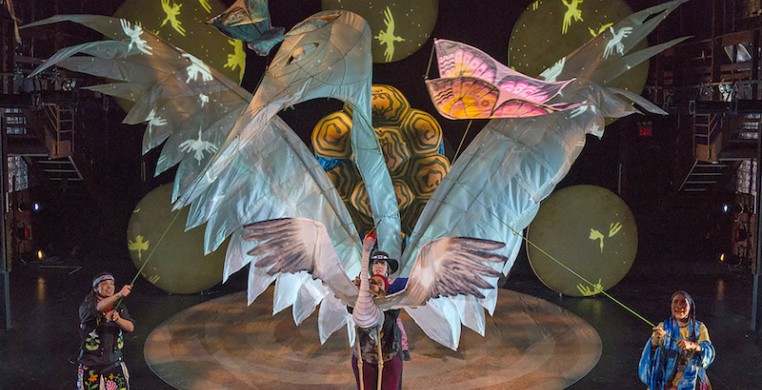 IBEX Puppetry in "Ajijaak on Turtle Island." The effigy and spectacle puppets that IBEX uses in the First Nations performance can normally be seen in pageants, parades and outdoor events (Photo courtesy of Jay Kelly) IBEX Puppetry uses large spectacle puppets to tell a First Nations story about the Earth’s interconnected environment, presented in partnership with Chicago’s American Indian Center. The French/Norwegian group Plexus Polaire brings a duet to the Dance Center at Columbia College exploring the life and death of the woman most known for attempting to murder Andy Warhol.

For Thomas, the use of a puppet as a material object in storytelling allows audiences to connect with the irrationality and larger truths of daily life. He invites both puppetry veterans and those unfamiliar with contemporary puppet theater to engage with thought-provoking work in a new way.

“In contrast to the media-saturated culture that we otherwise live in, it’s really live performance that can create such a spectacular, visceral presence,” said Thomas. “And that is very striking.”

More information and links to buy tickets can be found on the Chicago International Puppet Theater Festival website.