Chicago second to none in a packed March dance calendar

“Chicago is no longer a second city,” said Greg Cameron, the president and CEO of the Joffrey Ballet, on stage at the premiere of the company’s highly anticipated “Anna Karenina.”

We never were, Greg, but your point is well taken, and February was, indeed, an indelible month for dance in Chicago, with exciting premieres and historic accomplishments from more than one of our large and long-standing dance institutions.

As the dance community grows and continues to thrive, it can be challenging to keep track of the whole “scene,” which for See Chicago Dance, encompasses more than 200 dance companies and a whole host of independent artists across a multitude of dance genres and interdisciplinary practice. There was a time when critics (and jobs to employ them) were abundant enough that we could specialize in a particular area – and to a certain extent this is still true in music and theater – but we are now tasked with trying to see and know what’s happening in every corner of the field, and every corner of the city.

I’m quite glad for this, actually, but it does present some challenges when you’ve got just one body and three or four days on weekends that, in March, will have as many as a dozen performances to choose from. It’s one of many reasons I’m so delighted about the expansion of our team of writers so that we might vicariously see more dance through their words.

All of that is to say, you have many, many options for filling your dance card this month, and in addition to some of my obvious favorites below, I hope to catch the work of new-to-me Tiffany Lawson, Praize Productions, Movement Revolution Dance Crew and the Breaking Grounds Performance Series, plus concerts by beloved dancemakers like Ayako Kato and Ginger Krebs. I'm also excited to see new works by up-and-comers Lindsay Renea Benton, L. Garciella Maiolatesi, Marceia Scruggs, Jasmin Williams and Brittany Winters for the La Femme Dance Festival, a series developed by Red Clay Dance which performs at the new Green Line Performing Arts Center.

The Auditorium Theatre commissioned two new works from Hubbard Street Dance Chicago and Havana’s Malpaso Dance Company for a weekend series in their theater Mar. 2 and 3, the companies’ first-ever collaboration together. Decorated dancemaker Robyn Mineko Williams sets a work on Malpaso, while their director, Osnel Delgado, came here to create a new dance for Hubbard Street. Visa challenges prevented these creatives from an intended joint work for both companies, but this “trading places” approach is bound to make for an inspiring and imaginative evening.

Alvin Ailey American Dance Theater returns to the Auditorium for the 50th consecutive year Mar. 6-10, with three distinct programs that cater to all sorts of Ailey fans. On opening night comes the Chicago premiere of “Lazarus,” a two-act work created by hip-hop legend Rennie Harris. Plus there's a contemporary program of works by Jessica Lang and Wayne McGregor, or a retrospective medley of 12 Ailey works also on tap for the weekend.

Back for a second year on Mar. 10, “Sweet Tap Chicago” is my favorite way to see Chicago Tap Theatre: with live musicians (per usual), playing a Chicago-themed rep concert that makes the most of City Winery’s tiny stage, while sipping house wine and noshing on arancini. It can be hard to get food and drink once the concert begins, so take advantage of getting there an hour early when the doors open for a better experience. 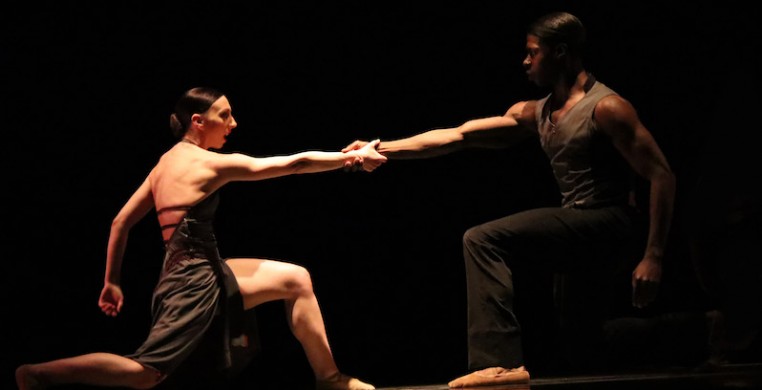 Dancers Maeghan McHale and Devin Buchanan in Brock Clawson’s “Give and Take” (2009). (Photo by Reveuse Photography)

Giordano Dance Chicago’s Spring Series Mar. 22 and 23 at the Harris is significant for a number of reasons, not the least of which is a world premiere by award-winning choreographer Marinda Davis, her first for this company. This series will also be the last for company members Maeghan McHale and Devin Buchanan, who’ve combined spent more than two decades in the organization.

ALL THE TIME IN THE WORLD: An Imaginary Circus

Celtic Nights: “Oceans of Hope—The Epic Journeys of Our Ancestors”

McAninch Arts Center at the College of DuPage

The Academy of Dance Arts

Ratri: Music and Dance of the Night

Ratri: Music and Dance of the Night

The Reva and David Logan Center for the Arts

William Shakespeare's MACBETH at the Athenaeum