Spirits were bright last Sunday at Skokie’s North Shore Center for the Performing Arts as Chicago Tap Theatre treated a packed house of moms, dads, grandparents, and loads of kids from tots to teens to a fun holiday frolic.

If you weren’t quite ready to shift gears into Christmas glee, “Tidings of Tap,” CTT’s annual holiday bash, made sure no one escaped without a smile, a hallmark of the tap company’s esprit.

Celebrating its 15th anniversary season, Chicago Tap Theatre never fails to entertain with its combination of  full-length dramatic narrative, visual spectacle, and live music. In a seasonal departure from its usual dramatic fare, “Tidings” is more typical of what most tap companies present, with a collection of seventeen discrete numbers set to music director Kurt Schweitz’s jazzy extrapolations of traditional wintery songs and Christmas carols, with a token nod to Chanukah for good measure.

A very loose dramatic through-line wove through the various numbers with the thoroughly charming and utterly captivating child wonder, Dasha Merkulova. Appearing here and there to pursue a magical red ball that had the uncanny ability to accompany her unbelievably pliable spine in back flips, cartwheels, and mid-air splits, the fifteen-year-old rhythmic gymnast brought child-like wonder and freshness to her seamless blend of lyrical dance and gymnastic virtuosity.

Typical of CTT director Mark Yonally’s theater aesthetic, her playful quest served as a unifying element that tied the program together with the suggestion of a story, whose characters happened to define their wishes, hopes and dreams in pull-backs, para-diddles, shuffles and scuffles. That they also, by the way, provide an integral percussion component to the on-stage musical ensemble of keyboard, winds, violin, cello, bass, and vocals, is also one of CTT’s unique strengths. 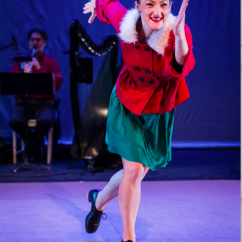 Besides spending a happy afternoon basking in general good cheer, there were some stand-out moments that deserve special recognition. 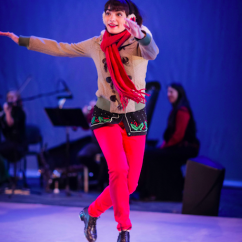 Isaac Stauffer’s surprise  gymnastic pyrotechnics, tossed off with a shrug amidst stellar tapping in a duet with Merkulova, lit up the stage with his energy and warmth. Stauffer has developed into a mature performer who owns the stage with authority and  infectious enthusiasm for both the work and for his fellow tappers.

Klezmer met tap dance in Yonally’s inspired rendition of “Hanukkah, Oh Hanukkah,” borrowing “Fiddler-esque” folk dance moves and catchy tap riffs to embody the musical essence of Schweitz’s terrific arrangement of the traditional Yiddish song. Upbeat and on fire, Yonally, Stauffer, and promising company apprentice Chris Matthews transformed into veteran Yiddish bottle dancers, complementing the syncopated beat of the music with infectious “freylikhe.” My only quip is that this was the only song in the program devoted to the celebration of Chanukkah. With material this good, and an uncanny sensibility for the klezmer idiom in tap, Yonally could well afford to mine a few additional klezmer gems for the future. 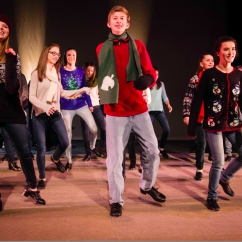 Yonally’s solo Improvagraphy, “Rest Ye Man” was anything but restful for the consummate tapper, tossing off unfathomably complex rhythmic combinations in a technical tour de force that blew all gentlemen, and gentlewomen, out of the water. 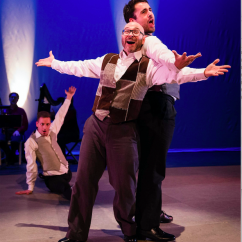 A large contingency of students, from the tiniest to teens, did themselves proud performing “Winter Wonderland, learned over a two-day CTT Tap Intensive in November, and H2Dance Company from Hope College guested with somewhat over-acted but clean attack in  Yonally’s “Black Friday.”

The cherry on top concluding the program was the traditional invitation for the audience to join the dancers on stage for the “Shim Sham,” which dozens of children and adults did. It was a perfect finish to a program that did exactly what it set out to do, much to the delight of all.

North Shore Center for the Performing Arts in Skokie