The dance behind capturing dance photos: JOMBA! festival’s 'Through the Lens' gallery

For arts photographer Val Adamson, the trickiest part about this year’s JOMBA! Contemporary Dance Experience moving online has been watching the works without taking photos. Having photographed the festival since its first season 22 years ago, Adamson has been the one person responsible for creating these snapshot archives of the artists and their works. This year, the JOMBA! team decided to integrate photography in a different way: a virtual photo gallery, “Through The Lens,” with photos selected by Adamson and festival director Dr. Lliane Loots spanning back to the festival’s first year in 1998. The gallery was accessible on the JOMBA! website throughout the festival’s duration—along with two videos of Adamson talking through her favorite photos in the gallery and conversing with Durban dance artist Musa Hlatshwayo.

As a writer and dance artist from the United States and a first-time audience member at the festival based in Durban, South Africa, I am an outsider to Adamson’s work. Yet, immediately from scrolling through the gallery, I instantly appreciated the amount of action and personality in each photo. Her photos move. She captures dancers—halfway through a jump or kick, faces dramatic and wide-mouthed—at exactly the right moment before the artists transition to the next step.

So how does she do it? Years of practice, a love for dance and a few happy accidents. Adamson came to photography through a last-minute decision when applying to college. She came to dance photography through an unexpected job offer at the State Theatre in Pretoria and later the Playhouse Company in KwaZulu-Natal. She has since embraced whole-heartedly her role in the artistic process.

Adamson has internalized a sense of timing in dance that allows her to anticipate when a magic moment is going to happen on stage—a skill she has been honing for years. She’s even learned the different time structures that define different dance styles.

“It’s difficult to explain, but it’s a timing thing based on how the body moves in different genres of dance,” Adamson said. “I’m watching the dancers so closely that I can figure out that something is coming or they’re gathering their body to do something—a jump or whatever. I often don’t know what they’re going to do; I press the button and hope it’s something spectacular.”

In the early years of the festival, Adamson would often shoot in black and white film, as it captured low stage lighting better. Since moving to digital cameras, the continually upgrading technology has allowed her to adapt to JOMBA! performances which she observed had grown more adventurous in their approach to movement, setting and stage elements over the years.

“The JOMBA! festival has gotten a lot more experimental over the years in that they’re trying more interesting things. I think that’s due in part to technology. I mean lighting itself has progressed so far over the years, so artists are able to do more interesting lighting,” said Adamson. “And through the whole world opening up with the internet, people are exposed to more things, so the artists have gotten more adventurous with the works they create.” 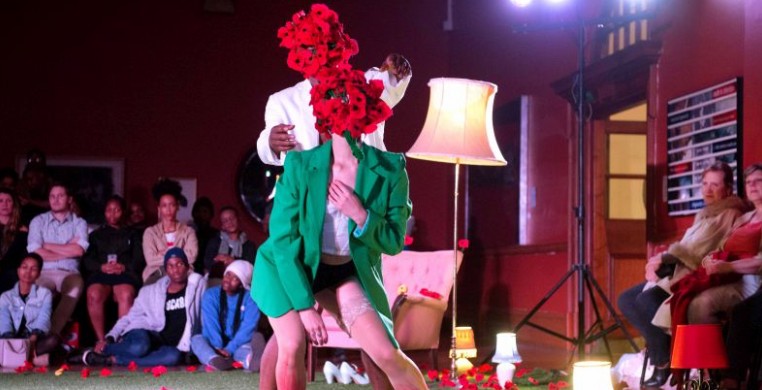 Leslie Scott’s “Hymn +Them” on Bodyart, a piece that Adamson remembers for Scott’s adventurousness with both choreography and setting, and for the risks Adamson was able to take photographically.

Adamson sees the future of photography moving towards risk-taking, noting Leslie Scott’s creation on BodyArt in 2019, “Hymn + Them.” The work was presented in an intimate setting where Adamson could be close to the dancers while also capturing audience reactions in real time. The dancers wore red-flowered headpieces that covered their faces, so Adamson had to capture other elements to portray the personality of the piece. Much of the piece was lit solely by floor lamps, something that was easier to capture with current camera technology.

Adamson recognizes how instrumental her role is to documenting both the JOMBA! festival and the works of presenting artists. Even with the ability to document dance via film, Adamson pointed out how photographs have the power to show more of the details in a work because people tend to stare at the singular image for longer than a video, which is continually moving through different frames or images.

“With a photograph, you can take time to notice all of the details—the costume, the lighting, the props, everything. And it’s always very important to keep a record of live performances, especially with festivals where there’s no time to go in and do a pre-publicity shoot and then a dress rehearsal shoot. Instead, you have one opportunity to shoot the performance, and that’s it,” Adamson said.

As my conversation with Val went on, she continually turned the conversation back to the artists, even asking me about my own work at one point. Though she doesn’t consider herself a dancer, she has never held back her admiration of dance artists. I believe that is what allows her to capture such stunning photographs.

“The thing that is so important when taking and editing a photo is trying to get people to appreciate everything that goes into these dance works,” Adamson said. “Photographs can’t necessarily show the years and years of training that a dancer has put in, but they can show you the idea that went into the piece, the lighting, the costume and the choreography. I mean so much goes into a dance work. It would be nice if people thought about everything that went into getting that shot—because I am just full of admiration for dancers and choreographers. They are very incredible people.”

In her video conversation with Hlatshwayo, the two laugh over Adamson’s tendency to sway along with the performers as she’s photographing, surfacing the question: isn’t her photography so captivating because Adamson, herself, dances?