Run, don’t walk, to Chicago Dance Crash’s “The Bricklayers of Oz,” (Ruth Page Center for the Arts, July 28-August 5), a Hip-Hop prequel to L. Frank Baum’s “The Wizard of Oz.” Tell your friends and bring the kids for a spectacularly entertaining 75-minutes of superb dancing, music you can’t resist no matter what your musical persuasion, and great storytelling that puts it all together with a real message, accompanied by the compelling lyrics and narration of Al Tamper, the rapper.

Dance Crash Artistic Director Jessica Deahr’s “The Bricklayers of Oz” is so original, so bursting with freshness on every level, and so polished, it literally sparkles from start to finish, no small thanks to Jeff Hancock’s wonderfully whimsical costuming.  Deahr and company ought to be setting their sights on a bigger house and a longer run where larger audiences of all ages can have ready access to this gem of a show.

One of the many plusses that makes “Bricklayers” so instantly appealing is Deahr’s manipulation of Hip-Hop dancing to create a choreographic lexicon that embodies the street vernacular and style of the popular dance idiom while elevating the form to concert dance level in its use of space, group design, rhythmic complexity, movement invention, and dramatic expression.

In addition, the theatrically-rich character portrayal and dramatic action are a product of both clever choreographic choices and the dancers’ remarkably good acting across the spectrum of fourteen individually distinct cast members. 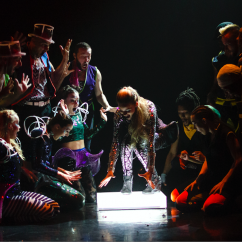 Jessica Deahr with The Munchkins

Of special note is KC Bevis, a dynamic dancer of considerable expressive and technical range, as the leader of The Skeezers. Her closing Act I solo is a tour de force of technical virtuosity, gymnastic pyrotechnics, and emotional build that drives the plot to its crisis.

David Ingram dazzles with Hip-Hop stunts and plenty of panache as Nick Chopper, the Skeezer who makes the almost fatal faux pas of falling in love with a Munchkin, the adorable Kelsey Jayne as “Nimmie Amee.”

Deahr herself, in a rare appearance in a Dance Crash production, is a terrific dancer. Deliciously costumed in Hancock’s dominatrix-inspired sparkling silver body suit, bustier over-bra, and matching high-top platform sneakers, she devours the stage as The Wicked Witch of the East, clearly having a blast playing naughty to the hilt, that is, until Dorothy and her famous house come barreling into Oz.

Not to be slighted, the gymnastically-inclined chorus of dancers fly, flip, tumble, roll, spin on their heads, hip, hop, jiggle, wiggle, shimmy to the beat, and otherwise astound while playing an integral role in the plot. Dancing up a storm of fun and strife as the culturally and class-segregated populations of privileged Munchkins and marginalized Skeezers (aka The Bricklayers), the Skeezers’ job is to sweep up the glittery detritus the slap-happy Munchkins leave in  their wake.

When the witch gets it in her head that she needs to pave the road to Oz, it’s the Skeezers who have to invent and build bricks made of silver to illuminate her East-Side highway. Trouble comes when the Skeezers, over-worked and under-paid, realize the road is not for them. Kudos to behind-the-scenes brick makers, Josh Wechesser and Bread & Roses Productions, for creating magical props that light up on command and change the fate of the Skeezers in a surprise plot twist. 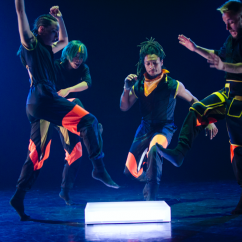 As choreographer, Deahr, in a process of close collaboration with rap writer and narrator Tamper, has devised an ingenious Hip-Hop version of Delsarte-style pantomime that recalls the highly-codified gestural storytelling interludes of classical ballets like Giselle and Swan Lake.  In a language all their own, the characters coordinate elaborate arm and hand movements  with the rhythm, melody, and language of Tamper’s voice-over narration and dialogue. The effect is believable, emotionally honest movement conversation, a combination of pantomime and whole-body moves. These well-placed interludes add texture, variety, and animated storytelling to the high-energy dance sequences.

Music is an infectious crazy-quilt of rap, hip-hop, and vintage oldies (circa 1930), fueling dancing that is continually reinventing itself in discrete sequences that drive a simple but engaging plot and build suspense. Fats Waller’s “By The Light of the Silvery Moon” and Doris Day singing “On Moonlight Bay” are especially effective contrasts to the hip, funk, alternative, and get-down sounds the likes of Stromae’s “Alors On Dance” and RJD2 “Before or Since.”  More than mere accompaniment to the dancing, the musical mix works, integrating the dancing and storytelling and adding yet another layer of meaning that lifts the story’s emotional stakes to a higher plain.

As much fun as “Bricklayers” is, the production never loses sight of its message, which is  poignant, universal, and even-handed in its delivery.  Imagining how The Yellow Brick Road really came into being, Deahr and company have come up with a pertinent story of class marginalization that rises above popular clichés and champions self-actualization and the power of group solidarity to demand and achieve equality and respect. If only…