Dance For Life Taps Heart and Soul of Chicago

An onrush of pedestrian traffic flooded East Congress Parkway last Saturday night as dance enthusiasts from all corners of Chicago formed a mass promenade toward the Auditorium Theatre. They knew they were in for a treat. What’s more, they were participating in one of Chicago’s more remarkable humanitarian efforts: Dance For Life.

Solidarity has always been the hallmark of Dance for Life, the annual fundraiser for Chicago Dancers United, bringing together Chicago’s rich and diverse dance community for a one-night performance. All of the dancers donate their rehearsal time and performances.

Now in its twenty-sixth year providing assistance to any member of Chicago’s professional dance community facing critical health issues and funding AIDS/HIV research, Dance For Life has raised millions of dollars since its founding by Keith Elliott and Todd Keith in 1992.

The culturally-specific “In The Meantime,” set the tone for the night, melding percussive dance genres of Flamenco, Irish Step, and Tap. Jointly choreographed by Lane Alexander of the Chicago Human Rhythm Project, Mark Howard and Maggie Doyle of Trinity Irish Dance Company, and Claudia Pizarro of Ensemble Español Spanish Dance Theater,  each of three duets demonstrated the unique qualities that distinguish their respective genres, while a fourth segment brought all six dancers together for a rhythmic jamboree of cross-pollinating cultures that emphasized commonality across cultural borders. 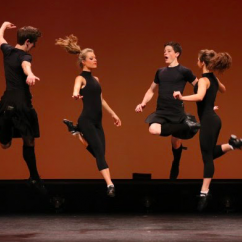 That common ground was echoed throughout the program with cross-currents of style, genre, and theme, from the literal folk forms of “In The Meantime,” to the more abstract contemporary dance works that followed.

Picking up on the theme of percussive footwork, the Joffrey Ballet’s eighteen exquisite women, costumed in nothing but nude bras and briefs, offered up an excerpt from Alexander Ekman’s irreverent “Joy” (2017), created on the Joffrey this past spring. The Joffrey women began by dropping their pointe shoes to the floor in a clatter of gleeful defiance, proceeding to turn any preconception of ballerinas and toe shoes on its ear.  Ekman’s playful deconstruction of classical form had the women stalking across the stage like insects on all fours, posing like flamingos, skipping and running en pointe, and forming a fearsome unison battalion to the jazz beat of Django Django. Ekman’s absurdist take on the art of pointe work wants us to know that ballerinas are real people with human voices. A fun frolic, to be sure, “Joy” echoed Second City’s Carissa Barreca and Kevin Sciretta’s flippant entr’acte repartee, but one couldn’t help marveling at the under use of the Joffrey’s virtuosic ballerinas in a choreographic statement of modest impact. 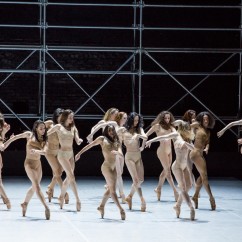 The Joffrey Ballet in "Joy"

Jessica Miller Tomlinson Choreography, new to Dance for Life this season, presented “In Tongues” (2011), an enigmatic abstraction set to music by The Talking Heads. An intriguing opening of dancers being tossed out onto the stage where they jogged in place promised visual surprises. A quartet of mute singers and air-instrumentalists mimed playing the music for a hyperactive male duet; a pedestrian maid in Victorian black dress and white apron appeared with a tub of water and towels; men donned tu-tus over their slacks.  In between, inventive ballet-with-funk movement interludes, all executed with crisp authority, and Tomlinson’s distinctive choreographic voice captivated, but the many good ideas on display never quite coalesced into a cohesive whole. Culminating in a puzzling baptism/water-boarding, one was left pondering why. 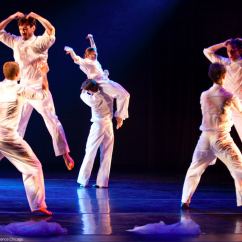 Giordano Dance Chicago’s reprise of Randy Duncan’s “Can’t Take This Away” (1997) was well worth repeating this year and served as both artistic and dramatic anchor for the evening. Closing the first half of the program, its impact was one of both inspiration and astonishment, reminding us of the lofty aspirations of Dance For Life and the sublime heights Chicago dance and its dancers can attain if we believe in the possibility for good to overcome hardship. The live, a cappella gospel music of the Bournés Family singers, beginning in silhouette on a darkened stage, cast a haunting aura over the vast Auditorium Theatre, guiding the journey from darkness to light, from despair to joy, from the stage right down the aisles and into the hearts of the audience, a journey on which Duncan’s epic choreography and GDC’s lush dancing took the audience with full force. 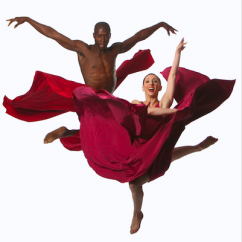 Devin Buchanan and Maeghan McHale in "Can't Take This Away"

Hubbard Street Dance Chicago opened the second half of the program with two offerings from recent seasons. Nacho Duato’s lyrical “Jardi Tancat” (1997) expanded on Ensemble Español’s first act traditional Spanish dance in sweeping gestures of sowing and reaping, set to the Catalan music of Mariá del Mar Bonet, while Crystal Pite’s solo excerpt from “A Picture of You Falling” (2008), bid farewell to veteran HSDC dancer Jason Hortin.  Celebrating his final performance after ten years with the company and Dance For Life with his own unique fluidity and dramatic understatement, he fittingly disappeared into the ether of upstage darkness, not once but twice, to the simple voice-over of his narrator/director: “This is how it ends.” We will miss him and wish him well. 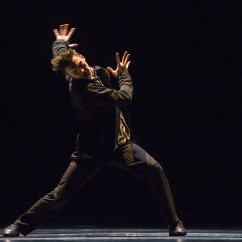 Visceral Dance Chicago made a huge impact on Dance for Life in its very first season five years ago and continued to deliver with an energetic excerpt from Marguerite Donlan’s “Ruff Celts” (2016), set to traditional Irish fiddle music. Flickering across a vocabulary of its own cult language were the unmistakable kicks, jumps and cross-skips reminiscent of Trinity Irish Dance’s footwork earlier in the evening, adding jazzy riffs to a tribal motif of medieval Celtic lore.

Randy Duncan once again created a rousing finale for the pick-up ensemble of twenty-one dancers from nine different companies plus two independent dancers, set to original music by Andy Mitran. The breezy lines of dancers crossing the stage, contrasting groups in spatial and rhythmic counterpoint, characterized the feel-good vibe and flowing style of Duncan’s abundantly rich choreographic invention and masterful use of spatial design. Beyond choreographic achievement, however, is the resounding statement of unity this cornucopia of Chicago dance embodies.