I had forgotten that seeing a show at City Winery, a West Loop restaurant/winery/music venue, means arriving at least half an hour early to get settled and order from the excellent menu before the action starts. Turns out, the process of being seated and served right at show time is chaotic at best. And as an expanded cast of dancers and musicians from Chicago Tap Theatre (CTT) took to the stage in the midst of my trying to order the fired risotto balls, unable to see the tappers’ feet or hear what the server was saying, I was just plain crabby.

Fifteen years ago, Mark Yonally introduced Chicago’s already-vibrant tap scene to his unique approach to the form. Yonally’s unwavering commitment to live music and desire to build tap audiences through a playful approach to narrative choreography sometimes overshadow the real essence of this company, which is rooted in rhythm. Using his feet like any other instrument in a jazz ensemble, Yonally’s foundation was built in jazz clubs in Kansas City, and later as an undergrad at the University of Kansas in Lawrence. Remembering this, my frustration with the sight lines faded. I opted to treat CTT at City Winery as I would any other music show, giving myself permission to listen more than I watched and enjoy the atmosphere, rather than paying studious attention to the dance show. By the time the risotto balls arrived, I was having a great time.

Dubbed “Sweet Tap Chicago,” this two-show, one day engagement March 11 featured classy arrangements by the ever-talented CTT music director (and cool bassist smooshed against the back wall of that tiny stage) Kurt Schweitz, who carried us on a musical journey through the 20th century and up through today. Included on this Chicago-themed evening were tapped versions of a mash-up between Curtis Mayfield and Kanye West, a medley of Styx tunes, and, of course, “Sweet Home Chicago,” with emcee and vocalist Taylor Mallory sharing the Chicago connections of the composers and songs on the bill along the way.

So City Winery might not be the next great dance venue, but Yonnally and Kirsten “Kiki”  Uttich, the evening’s primary choreographers, have a way of magically shaping their dances to fit in sub-optimal spaces, using every ounce of that stage and gluing it together with all the charm and humor CTT brings to tap on the regular. In the opening number to Chicago’s “Saturday in the Park,” the dancers spread out onto the restaurant floor for the only full-company number of the night, which put me toe to toe with the excellent Isaac Stauffer (in fantastic green pants). With selections as wide-ranging Smashing Pumpkins’ “Today,” Chance the Rapper’s “Wanna Be Cool,” and JC Brooks’ arrangement of Wilco’s “I’m Trying to Break Your Heart” on the same program as a sentimental duet to Fred Fisher’s “Chicago that Toddlin’ Town” for Yonally and his wife, Jennifer Pfaff Yonally, there was honestly something for everyone. 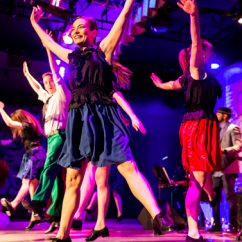 We also were treated to a preview of “Tapped for the Very First Time,” a Madonna tribute planned for June 23 and 29 at the Athenaeum Theatre. Conceived in the same vein as the previous CTT summer Pride weekend extravaganza honoring Queen, this sneak peek of “Get Into the Groove” arranged and sung by super smooth indie soul vocalist JC Brooks was enough to tease any rational person into getting tickets for this now.

For me, the best of the twelve dances were the un-choreographed ones, particularly watching Yonally and Uttich in their improvised solos. I’ve often mused about how much I love when Yonally’s improvises with Kurt Schweitz, and how fitting it would be to see those two riff in a jazz club or martini room. Wish granted.

Lauren Warnecke is the dance writer and critic for the Chicago Tribune.