In almost 25 years since his last appearance at the Dance Center of Columbia College Chicago, Donald Byrd returns to the Dance Center with Spectrum Dance Theater to present his newest work, “Rambunctious Iteration #3 – The Immigrant.” The program, consisting of five works, features musical compositions from several American composers that locate themselves within various non-Western diasporas. Featuring a mix of ballet and jazz vocabularies, "Rambunctious" unpacks several xenophobic conversations encircling the 2016 election, and the different ways that diaspora, emigration, narratives of the “other,” and hyphenated American experiences influence American culture through music.

Each of the five works has a voice of its own, as if they were several notes on the experience of moving from one place to another, and the plethora of hybrid forms and cultures that emerge. Donald speaks to the eclectic program in his impromptu, but funny, Q&A sessions between each piece stating that a four of the five works were created in about two weeks with the exception of “August 1, 1966” (2016), which was commissioned by the University of Texas at Austin (UT-A) to commemorate the horrific shooting at UT-A, an event remembered as one of the first “mass shootings” in America. However, there is a clear through line in the evening provided not only in the apparent ballet and jazz vocabularies, but also in the underlying “cool” and Africanist aesthetics that makes each work lush, exhilarating and utterly gorgeous.

I am not at all bored, or nonchalantly glancing at the clock waiting for it to be over. Instead, I am enticed by the “find-all-the-possibilities” jazz-like relationship between the movement and the music, and the dancers’—whom themselves are all naturalized Americans—ability to fully embody lament, humor, exhaustion and joy with precision and care. In “Paraphrase” (2017)—a literal paraphrasing of movement material from George Balanchine’s 1948 “Concerto Barocco”—the dancers mark their arms from time to time, while doing fully engaged and energized jumps that you can hear reverberate through the stage. They smirk and play with curvy, yet sharp lines and angles, try to upstage each other, and even screw with ballet’s gender roles with two same-sex duets, in what is a funny, yet firm commentary on the Africanist influence in Balanchine’s work—and thus the American ballet world.

The solo by Mikhail Calliste in “Not From Here” (2017) is a highlight of my evening. Calliste, a native of Trinidad and Tobago, demonstrates power and strength with every battement, spiral to the ground, and undulation of his spine. I am enveloped into every shutter of his body and search in space that demands me that I see him. The solo is a strong addition to Byrd’s underlying commentary on blackness, and the ways that it is always present and in conversation with our modern American art forms. 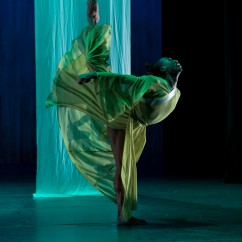 Photo courtesy of the Dance Center and Spectrum Dance Theater

“Roaming Ghosts” (2017) is also a strong work in the evening. The work features eight different movements with solos and duets, and is a show of the dancers’ boundless energy and gentleness. The piece’s etherealness is a nice juxtaposition to the horror and violence displayed in “August 1, 1966,” and frees us to reimagine the possibilities outside of our present state.

“Rambunctious” is a double-conscious ode to all of us who experience the reality of what it means to be of this land, and at the same time belong to another dimension of rhythm and space. And, in this time of dangerous, nostalgic cries, I am thrilled that this work is here in Chicago, a city that is familiar with the realities of migration—the constant moving in/out of bodies, cultures, and memories—and the consequences of not seeing each other. Similar to the ways the dancer’s shadows appear on the walls, to create new shapes and perspectives, “Rambunctious” is a timely note for us to consider us what it truly means be American in 2019, and how we all are singing a song in a strange land.