Like dust in the wind, a South African village faces its ephemerality in Garage Dance Ensemble's latest film

Seeking to share the stories of the Namaqua people and incorporate contemporary dance into their own spaces, choreographer Byron Klassen brings us into the homes, yards, churches and communal gatherings of the copper mining community of O’okiep located in the northern region of Namaqualand, South Africa.

Produced by the acclaimed Garage Dance Ensemble,”Gat innie Grond, Wond in My Siel (Hole in the Ground, Wound in my Soul)” is a well-crafted 40-minute dance film based on the anthropological research of Janine Lange. The film recently made its impressive premiere as part of the virtual programming of the JOMBA! Contemporary Dance Experience, now running through Sept. 5.

The work preludes with an evening fireside dance that ceremoniously begins our story. The flames awaken the dancers and seem to inspire their bodies with long outstretched limbs reaching into the air and slowly building into a flickering and crackling unison. Like the flames from within the earth that produced the geological riches of the region, so too the story of this community begins with fire.

As day breaks, another ritual takes place as villagers gather in the heart of town with salutations, hugs and greetings among common preparations for the new day ahead. The youthful ensemble dancers—featuring the talented likes of Faroll Coetzee, Jaime-Lee Hine, Lynette Du Plessis, Dustin Jannetjies and Lihle Mfene—cheerfully integrate throughout the village, weaving in and out of the way of their elders as they do chores, head to church and prepare meals. Here too, we are gifted with the first appearance of featured musician Sylvester “Oom Dollie” Fortuin and his Castrol Oil tin can guitar who serves as an ethereal musical guide throughout the film.

The dancers assemble among the sun-kissed sheets on a clothesline as gospel music reinforces their internal strength and connection rooted in faith. Traditional and contemporary African dance dialects and hallmark gestures of the Black church experience—with their spirited jumps, tight foot shuffles among the dust, and raised hands to the heavens—provide a richly layered dance that is joyful and heartwarming  But all is not as it seems.

Actor and writer Esmé Mathinus, a powerful figure and seeming matriarch of the village, begins her narration by expressing grief over the loss of her husband and the waning interest and investment of youth in the community. “Don’t look at the dust in my home. Look at the dust in my soul,” she proclaims to the camera, breaking the fourth wall and looking straight into the heart and conscious of the viewer with a direct, steady gaze. From there we begin to see the cracks in the community formed by heartbreak and loss.

As the day continues, the youthful dancers break away at times from the elders, to dance mournfully and longingly. However hard, life still goes on here in this village though deeply scarred and pained by the traumas of apartheid, reckless industrialization and environmental neglect. “Forgive them, they don’t know what they are doing,” Mathinus later says. “They raped the land and left her in turmoil.” A once naturally rich region is now a ghostly shadow of itself.

The ground and waters are polluted with toxic poison as chemical remnants from the nearby mines seep into the earth. Years of unregulated waste and government disregard has led the villagers to ask whose responsibility it is to clean up the mess, especially as the youth venture away for new opportunities and fulfillment. The melancholy narration wonders: Will they come back to help? Will they remember us? Generations of communal life now seem to be at risk of disappearing into the void of the windswept arid landscape that surrounds them.

Following a procession into the dry dessert nearby, a funeral dance is held as members of the ensemble, clad in all black and cued to the rousing spiritual chorale of the Stellenbosch University Choir, take turns to evoke remembrance and release, eventually coming into unison again as they did in the opening fireside dance. Meanwhile the women of the village reminisce over the funeral notices of lost loved ones. Then the neighboring elders, dancers, youth and children begin to converge in the heart of town for a celebration of life in a joyful intergenerational dance of gathering anew. Though death is inevitable— human, community, or otherwise— the residents of this region remain united, as they always have been, by their faith. Uplifted by the love for each other and their shared experience, they dance for their ancestors and for one another.

The film concludes with a touching and poignant solo danced by ensemble member Jaime-Lee Hine. In the dusk of the local mountain terrain she is accompanied by an achingly beautiful rendition of “Amazing Grace,” performed by the Ladyfrere Xhosa Singers. As the sun sets on Hine, her arms outstretched to both the sky and the earth, barefooted and grounded in her movements all the while kicking sand into the ever-present wind, one is left to ponder the hymn’s message of redemption. How many other communities around the world are left in the shadows of neglect and broken promises, left to disappear like the dust in the sky? 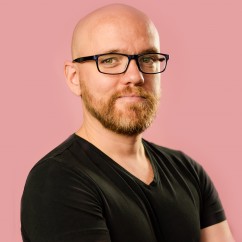 2021 Critical Dance Writing Fellow Joel Solari is an independent contractor based out of Colorado where he currently serves as the PR manager for the Vail Dance Festival. With nearly two decades of experience in the performing arts sectors across Chicago and New York City, he has developed a specialty in arts marketing and communications. Previous work experiences include the Wirtz Center at Northwestern University, Giordano Dance, Chicago Dance Crash, BRIC Arts, Tribeca Performing Arts Center, and Actors’ Equity Association. Recent client partnerships include Chicago Gay Men’s Chorus, Links Hall, 3C Theatre Partners, and Inaside Dance. In 2008, Joel was awarded the prestigious Arts Management Fellowship at the John F. Kennedy Center for the Performing Arts in Washington D.C. Originally from Branson, Missouri, he received a BA in Visual Art and Performance Studies from Missouri State University (2004) and a master’s in Arts and Cultural Management from Pratt Institute in New York (2006).