Three women—Sojourner Zenobia, Angel Dawid, and Zahara Baker—sit next to each other with their eyes closed. They are enveloped by dream catchers and strips of torn, silk fabric, tree branches, and candles as part of an installation made by some of the many artists invited to play and collaborate in Eclipsing. The women are still, grounded and pull all our energies into one breath. Save for the sounds of nature mixing with the sounds of the city outside, we are still, and it is quiet. Then come soft whispers from the three women. The whispers increase in volume and range from moaning to laughter to weeping to words: “Sadness, swirling around, dancing around,” “I love you,” and “Sweet.” One of women begins to play the clarinet and another a large framed drum that gives life to the third woman as she moves her body through the space, letting her arms whirl above her head, and her torso and spine follow along. She finds her way to the ground and begins to roll as the music gets faster, and the words become indistinguishable. Then silence. We are left to sit in the residue before the three women begin another beautiful melody, and begin a procession out of the room, out the door, and into the city.

In its second iteration, Eclipsing is a multimedia, collaborative festival curated by Amina Ross with assistance by Madison Smith, that creates space for LGBTQIA+ artists – particularly trans, gender non-conforming, and queer artists of color – to activate spaces around the city and engage themes surrounding darkness as a means for collective transformation and healing. This year with the theme of “death and transformation,” Eclipsing brought together over twenty artists and offered a variety of programming including dance works-in-progress showings, workshops, film screenings and other public programming at The Breathing Room, Filmfront, Hyde Park Art Center, Links Hall, Museum of Contemporary Art Chicago (MCA), Nightingale Cinema, and Central Air Radio. 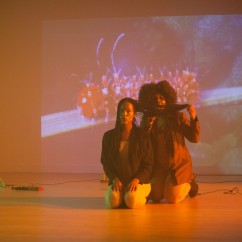 Eclipsing Day 1, performer Aumar. Photography by Ally Almore, courtesy of ECLIPSING Festival. I attended three of the many programs during the festival, including the opening reception at The Breathing Room—a cultural arts center on Chicago’s South Side—featuring Alia Watson, Rhonda Wheatley and Zenobia; a collaborative performance featuring DJ and host of Central Air Radio Jared Brown and dancer/choreographer J’Sun Howard at the MCA; and a performance at Links Hall featuring Howard, artist-scholar Rashayla Marie Brown, and professor and visual artist Ashon T. Crawley.

I am particularly drawn to the collaboration between Howard and Brown. Framed as a funeral, the performance uses sound and movement to examine death as it relates to the Black church and Black spiritual traditions. Audiences are even given programs with Brown and Howard’s obituaries as poems to their old selves. Brown (they/them)—an artist, writer and host of Central Air Radio, which aired several conversations with Eclipsing artists—morphed and warped gospel tracks, layering over house beats, sounds of a moving train, and even their own voice chanting things like “Is that you, God? I wore my Sunday’s best for you, for you. Hold on, the train’s coming.”

Videos of black churchgoers shouting and praising loop behind them as the music continually shifts and connects between house, gospel and jazz. It is powerful, and connects to Howard’s piece, which features solos by Solomon Bowser and D’edrick “D. Banks” Gray.  Bowser and Gray both offer their bodies as conduit for spirit, mixing the heat of social dance with the exuberance of praise. At moments they lay prostrate before their community—collapsed over, foreheads touching the ground, arms stretched across the floor, fingers reaching outward. In this moment of pure surrender, they are surrounded by the music of Mahalia Jackson and Kendrick Lamar’s “Mortal Man,” and the collective breath of the audience—one that whispers “trust in the process.” The music encamps around them, visible in the twist and undulation of their spines. It holds them up when they become overwhelmed by the spirit, wipes the sweat and tears from their eyes, supports their weight when it becomes so much that their body gives in. It covers them and protects them so that they can be at peace.

At one point, Bowser baptizes himself with water while the sounds of Mahalia Jackson continue to play in the background. At the end of the performance, we know that each of their tarrying is necessary, and deliverance soon come, when Gray laughs in exhaustion and says, “A nigga just wanna be free.” This rings in my ear for the entire festival, which provided space for conversations across artistic disciplines and experiences, offering opportunities for audience members to reflect on their own experiences of transformation, in their everyday, and in our city at large. The festival created space for each viewer, each workshop participant, to watch old things die, witness new things being born, and reimagine darkness as an enlivened and necessary space for tomorrow.