Elevate Chicago Dance and a moment of recognition 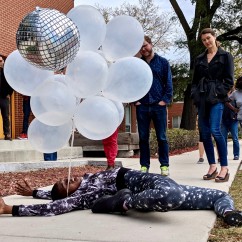 NIC Kay performs at the Dorchester Art + Housing Collaborative during Elevate Chicago Dance. Photo by Zachary Whittenburg. Early in this new year, the Seattle Post-Intelligencer published the first of many time-lapse videos to come, capturing the city’s astonishing pace of growth from a webcam on top of the Space Needle. As a Seattle resident from 1996 to 2001 who’s visited regularly since, I haven’t always been able to log these changes as they occur. It can take viewing a high-speed composite of more than 2,000 images to recognize just how much has happened over a few short years.

I felt the same shock of recognition during Elevate Chicago Dance, which compressed into three full days the multifaceted proliferation of ideas borne and cultivated by Chicago’s contemporary dance artists since the turn of the century. This festival-and-more, held October 19–21 in venues across the city, marked the culmination of a multi-year Regional Dance Development Initiative (RDDI), jointly produced by Chicago Dancemakers Forum (CDF) and the New England Foundation for the Arts (NEFA). Elevate highlighted works by current and former recipients of CDF’s $15,000 Lab Artist Awards, and nearly all of the Chicago-based individuals selected to participate in the RDDI Chicago Dance Lab — an immersive, 12-day program held on campus at the University of Illinois at Urbana–Champaign. Elevate’s dozen events and nearly 40 featured artists attracted curious Chicagoans, creatives, and steadfast dance fans alike, plus a cohort of professionals working in choreography, curation, direction, education, engagement, presenting, research, and residency programs. For a detailed rundown, click here to read my Summary Journal, which includes broader themes observed throughout Elevate, conclusions and takeaways, and photos.

In Elevate’s afterglow, one hopes that Chicago’s contemporary dance artists will benefit from more easily sustained visibility at home, as well as the greater appreciation they deserve elsewhere. One measure of its success may be the number and variety of applications to the 15th annual call for proposals for CDF’s Lab Artist Program, which remains open through February 6, 2018. Another may be felt at street level, through increased turnout for local dance classes and performances. At any rate, Elevate was just one snapshot, one moment in an ongoing, rich history of movement made in Chicago. The city and its dance artists will continue to reflect and refract one another as both grow and evolve, whether in conflict or in collaboration. While they do, they must be observed on a regular basis, so we might recognize where we are now, and know where we have been.