The baseball diamonds, basketball court, and jungle gym were bustling at Hamlin Park this past weekend. I loved walking up to this scene of springtime activity and I especially loved knowing that a professional dance performance would take place right upstairs in the Hamlin Park Fieldhouse theater. Call me sentimental, but these well-used neighborhood fieldhouses supporting sports, arts, and community make me proud to be a Chicagoan. If only the show inside had been as vivacious as the activity out.

The performance was a shared evening of work by the Chicago-based company Winifred Haun & Dancers and the New York-based BodyStories: Teresa Fellion Dance. Fellion’s 2017 “rose walk green ice” was first in the lineup and was by far the strongest work of the evening. The audience filed into the steamy theater—it’s always warm on the second floor of this 108 year-old building, but the heat was actually on this particular evening— where a prelude to the piece was already in action. Four female dancers—Kimberly Murry, Elizabeth Shew, Jessica Stroh, and Ashley Zimmerman—were situated on the tiny proscenium stage at the very back of the theater, and there were six audience members perched on stools atop the marley floor in the foreground. The rest of us took our seats in the risers.

That little stage at the back of Hamlin theater is one of the space’s hallmarks. The lighting back there is more expansive, brighter, and starkly different from the rest of the performance arena. There is always a sense that the activity there exists in another space/time dimension parallel to whatever is happening on the rest of the stage. In this case, the dancers were shifting shapes and positions around each other like stop-action animation. The sound design (by John Yannelli and Glenn Alexander) offered contemplative and slightly ominous support to this highly-specified, sculptural choreography. Were the dancers outlining or mapping the larger dance that was to come? Whatever the score, they looked like paper dolls in a creepy dollhouse on display. Their exaggerated costumes (by Nina Katan) with bright colors, shimmery shirts, metallic-looking leggings, a full pink pleated high-waisted skirt and another made of long jade tulle, emphasized this “paper doll” quality as they looked like little girls who had pulled their mismatched outfits out of the dress up box. Coupled with my view of those six audience members with their backs to us in silhouette, the initial images were quite striking.

The dancers eventually crept down from the proscenium stage and the “real” dance began. These women exploded into a complexly designed mish-mash of virtuosic choreography! I’m talking high kicks, tight turns, leaps, lifts (so many lifts), and fancy footwork all while weaving in and around the onstage audience members. They splintered into duets and trios and repositioned the audience around the space. It was a high-impact, high-density piece whose intended meaning, if there was any, was tough to place. The press release offered that this work was the final piece in a trilogy that Fellion created exploring “self-awareness within communal bonds.” I’ll buy that, but I’m also happy to accept the physicality for what it was: expertly executed and elaborate.

Jump cut to another doll-related but entirely different piece, “The Woman Who Fed Her Diamonds To The Goldfish Bowl” (2001) by Lonny Joseph Gordon performed by Summer Smith from Haun & Dancers. This work was originally made for Winifred Haun and, according to press materials, “explores the inner life of a uniquely disturbed woman.” Well, I guess this woman has some high-class problems. She is white, wears a floor-length crushed velvet evening gown, and recklessly throws her diamond jewelry into a fish bowl—which sits on a downstage right table next to a propped-up Barbie doll wearing an identical dress—in between, the execution of severe Horton-esque modern dance phrases. Although the dancing was well performed, the work felt incredibly dated. “The Woman Who…” may have been charming in 2001, but given our current cultural and political climate, it felt pretty out of touch. Many of us are no longer concerned with the internal struggles of wealthy white women, especially when we are grappling with their—or “our,” as I can be implicated in this demographic too—role as perpetrators of racial and ethnic oppression, as well as an all-too-frequent silence around the repercussions of our privilege. The context around what we find “disturbing” and what it means to be a “woman” these days has shifted dramatically over the last seventeen years. Why choose to re-stage the work (presumably) without revision? It might be time lock this piece in its time capsule and move on.

We returned from intermission to watch Fellion’s “Fault Line” (2010). This duet, performed by Murry and Zimmerman, also felt rather old, or maybe “young” is more accurate. In this work we can see an inkling of compositional intricacy but it never quite blossomed. Instead, there was more traditional (and predictable) unison, frontal symmetrical spacing, and a discernible  narrative—a relationship, a conflict, and a struggle towards resolution—all with a rather basic dance vocabulary of lunges, kicks, gestures and partnering. I should credit Murry for injecting a sense of urgency and power behind the movement, because otherwise the duet would have been somewhat ho-hum. Considered in relationship to “rose walk green ice” with all its swirling complexities, it was sort of cool to get a sense of the choreographer’s development over the past eight years. If we dance makers needed any more proof that we should never stop working on our ideas and honing our skills, this is it. 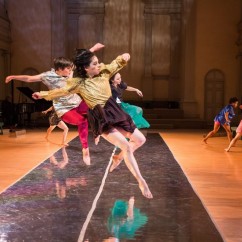 “Trashed” (2017), an ensemble piece for seven dancers choreographed by Haun and Australian circus artist, Emma Serjeant, was the final piece in the evening. The work combined modern dance with acrobatic stunts like standing on each other’s shoulders, cheerleader-style body tosses (without the cheer), walking on people’s hands, and impressive-looking centipede-like body formations.

I’ve seen a couple of dance-meets-acrobatics-type shows—mostly from the radical feminist Brooklyn-based company, LAVA— and although they can be thrilling, I find these works lack momentum. Literally, dancers have to stop moving in order to set their bodies up to safely “base” the performer who will execute a tricky balance on top. There can be a ton of running around, swinging, and jumping but the moment they need to set up for a trick, everything grinds to a halt. This reality was no different in Haun and Serjeant’s “Trashed” except their version was far less exciting than LAVA’s.

“Trashed” suffered from the compositional issues related to executing acrobatics safely in performance combined with the we-are-so-serious blank modern dance stare. Granted, the subject matter was supposedly dealing with the unfortunate human tendency to “clutter our lives with too much stuff”, which can be a serious matter, but there was little in the choreography to actually support or demonstrate that issue. The only mention of the problem of “clutter” came in the overt sound score of a man describing the consequences of his life as a hoarder. This text came maybe halfway through the piece and seemed apropos of nothing. (I had to check the program notes for a clue). What I saw in the dance instead was an overused motif of exaggerated slow motion running, a chemistry-less lovemaking duet between dancers Madeline Gullett and Dexter Bishop, and a section of running in circles only to stop—again, before the momentum could accrue— to  toss Gullett into the arms of a different man. Sure, there were other formations and tricks that ensued but nothing really stands out. I have no doubt that this work was challenging to perform: my kudos to the dancers. Unfortunately, their hard work was not enough to carry the show.  Ultimately, “Trashed” seemed to want more poignancy than it delivered.