Every three years, 'In>Time' reminds us what was great about Goat Island. This year's no exception.

The In>Time Performance Festival is arguably the best tri-annual festival that Chicago dancemakers and audiences barely know about. If we, as dance audiences, are too quick to dismiss the category of “performance” as a genre that’s not quite our thing, then we’d be seriously underestimating its history and potential.

One would be hard pressed to talk about the history of performance in Chicago without mentioning Goat Island, the collaborative performance group founded in 1987 with core members including Karen Christopher, Matthew Goulish, Mark Jeffery, Bryan Saner, Litó Walkey, and director Lin Hixson. The company worked for 23 years, making a total of nine densely researched, original performances that toured nationally and internationally among theater, dance and performance art festivals.

“Goat Island was always positioned in a sort of unknown space,” remembers Mark Jeffery, former company member and founder of the In>Time Performance Festival. “I think this is the nature of performance practice… We were able to situate ourselves in all these different contexts.”

When Goat Island disbanded, Jeffery was (needlessly) worried that he would never tour again and that his connections and access to an international network of multidisciplinary performance artists would diminish. As a result, in 2008 he gathered a group of local presenting organizations (Columbia College, the Hyde Park Arts Center, the Museum of Contemporary Art (MCA), the School of the Art Institute of Chicago (SAIC) and Links Hall, to name a few) and founded the Chicago Performance Network, whose purpose, at the time, was to present an evening of performance highlighting two emerging Chicago artists alongside one national and one international artist.

This laid the groundwork for what would become the citywide In>Time Performance Festival. Happening now every three years, the festival continues to thrive, solidifying Chicago firmly on the international performance “map.”

For it’s fifth season, In>Time is once again using Goat Island as an inspiration, as it centers its curatorial theme around the company’s oeuvre. In conjunction with the Chicago Department of Cultural Affairs and Special Events’ exquisite retrospective, “Goat Island archive – we have discovered the performance by making it,” on view now (and not to be missed) at the Chicago Cultural Center, nine original company members nominated nine national and international artists to make new work in response to their nine pieces. And, you guessed it; these works will be presented in nine different venues across Chicago.

As if this weren’t enough, there will also be a number of “satellite” performances and exhibitions under the umbrella of In>Time highlighting additional local, national and international time-based artists.

Festival goers will find themselves hopping around between High Concept Laboratories in Pilsen, to 6018 North in Rogers Park, to the Hyde Park Arts Center, to the Red Rover Series at Outerspace Studios in Wicker Park, to the Graham Foundation in Lincoln Park, and so on. The diversity of these spaces is integral to Jeffery’s vision of a non-hierarchical view of who or what is considered “of value” in performance.

“It’s great to have the institutions like the MCA but it’s also important to have the DIY spaces like Defibrillator and Red Rover Series. For me, it’s very, very important that these things are horizontal. Red Rover is exactly the same as the MCA. The same goes for the artists that we are bringing in” Jeffery says.

As for his stance on the role of choreography in contemporary performance, Jeffrey, himself a 2012 Chicago Dancemaker’s Forum Lab Artist and director of the movement and technology collective ATOM-r, says, “For me choreography is a set of questions that come out of prompts that then get staged and placed within a gallery, within a social practice context, within a exhibition context, within a proscenium context. Ultimately, I think about strategies that are both spatial, as well as political, revolving around the broader way that we think about movement. … Context is key and content is key.”

The In>Time Festival is already underway and will continue through April with a majority of the programing happening in February. If you can’t attend everything, here are some potential highlights: 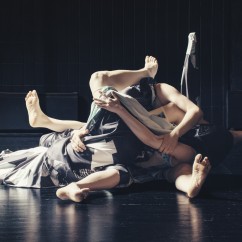 Defibrillator and Zhou B Arts Center present “I Put This Moment Here” Feb. 10, with performances by Ryan Tacata (San Francisco), Marilyn Arsem (Boston), and Chicago’s own Jenn Freeman. If you’ve missed Freeman's work in the past, now’s your chance to see what everyone’s talking about: her brilliant performative range from contemplative to explosive in her 2017 solo, “Dynamite.”

Also check out European collectives BADco. and Oblivia at Links Hall Feb. 21-22, Chicago’s Jefferson Pinder with “This is Not a Drill” at Gallery 400 on Feb. 26, Robin Deacon’s “Vinyl Equations” at Links Hall Feb. 27-28, and Ginger Kreb’s “Escapes & Reversals” at Unity Lutheran Church March 7-9.

For the full In>Time schedule visit www.in-time-performance.org or click below for the festival's See Chicago Dance event page.