JOMBA! Contemporary Dance Experience recognized choreographer and director Jay Pather as its legacy artist for 2021. Because of this recognition and honor, Pather’s film “Undertow” was presented as the opening feature of this year’s dance festival.

“Undertow” presents archived excerpts from multiple works choreographed by Pather and performed primarily by Siwela Sonke Dance Theater. If you simply try to value “Undertow” as a dance film, you likely will come away disappointed, as it is episodic and not always considerate of cinematic production value. Even to see it as pure dance misses the mark, as Pather’s work sometimes minimizes dance, in a definitive sense, and gives way to broader theatrical elements including spoken word, absurdist scenarios and characterizations.

“Undertow” captures themes across Pather’s work so that we, as an audience, can better appreciate the intellectual tradition found within his productions. As Pather says in his opening remarks, the 2021 JOMBA! theme of border crossings resonates, but true crossings require “digging below,” “rummaging through mud” and “tunneling underneath.” The result, Pather says, is that crossings “tug, hurt and tear.”

The film is a five-part digital curation, and across the five parts viewers experience the painstaking tugs and tears that Pather describes. Theatrical elements within each part heighten an aesthetic that simultaneously is indigenously African and relatable to people, like me, from outside South African culture. The palatable emotion and indigenous aesthetic are evident in every turn of phrase, and it leads the viewer to experience an unfolding landscape of defiance full of questions about cultural exclusion, power struggles and gender norms, among other things.

Part one of the film is called “Crossing Boarders:  A Rainbow Nation Cacophony.”  This part of the film includes excerpts from “Shifting Spaces Tilting Times,” a short interview with Achille Mbembe, and “Blind Spot.”  From the opening scenes of “Shifting Spaces Tilting Times,” the performers show contrast of cultures and traditions. A singing performer brings levity as a ballet dancer morphs her movements from stately and traditional ballet into polycentrism and repetition that is more indicative of what is valued in an African aesthetic. The evolution is evocative of the power struggles between a Western tradition and a broader consideration of culturally indigenous communication.

This theme of power struggles is further established in the short interview with Mbembe, as he asks, “Can we keep dancing today as we were dancing yesterday? What are the forms of dance that are required by these times of ours?”

Pather’s showcased pieces throughout the remainder of this film provide an answer to the question of what the times require of choreographers who aim to defy and challenge the status quo. In “Blind Spot,” we see dancers on balconies to symbolize hierarchies of society. Royalty is shown wearing a crown on a higher balcony than the commoners, many of whom wonder the streets with choreographed toils.

Throughout the 14 rooms of part two, “The Failed State,” we further experience defiance as diverse bodies make deals through dancing interactions of duets and unison statements of athletic tumbling. We encounter a room “of courage and conscience” where dancers exit the room and re-enter through coffin-like doorways. In a room “of power, sex and prophecy,” defiant powers are communicated through male dancers in suits showing strength through lifts and flexibility as they work into the ground for a splits posture. In some rooms, the choreography is striking in its construction. In other rooms, minimalist movement accentuates the more dominant human voices.

The third section of the film is entitled “Embattled Intimacies.” This section opens with excerpts from “Hotel.” Within this piece, we experience the angst-ridden interactions of a white man and Black woman. At one point, the man runs around the room while the woman vomits in the hallway. In “Kitchen,” power is communicated through space. In the opening, the female dancer writhes on the floor while the male dancer takes a position of power at a table. Their interactions, at times, work congruently, while at other times, body positions contradict, and we see power struggle through space, weight and boundedness. It is only in “Rite” that we experience stretches of what can be thought of as contemporary dance. Sometimes tension and defiance are shown through highly energetic choreography at the body level but with some sense of boundedness on the stage. At other times, men in high heels and long wigs provide a juxtaposition to cisgender norms. This too provides a type of defiant message for audience contemplation. Aesthetic serves the thought.

The fourth segment of the film is called “Insurmountable Borders” and features excerpts from “Body of Evidence.” Early in this part of the film, the audience is told through written text that “the body remembers more than the head.” We are challenged to consider what the body can do with the ebb and flow of knowledge. That ebb and flow is shown through stage production and site-specific choreography. In one excerpt, dancers wearing buckets on their heads execute rhythmic steps in their underwear. But then the rhythms give way to fluid athleticism as we hear sounds of breath in the soundtrack. Throughout the rest of this section of the film, we find dancers in avant-garde settings dancing either alone or with characters around them but sometimes seemingly unaware of them. In each scene, the upstage or side stage walls displays skeletal images of heads and torsos.

In the “End Note” of the film, we experience excerpts from “Cartographies of Survival.” This section shows multiple episodic scenes of those who are oppressed by their cartography—mother and child and a homeless dancer due to floods. As with the entire film, it is not the dance that is significant here; rather, it is the cultural attachments to the dance. The audience is left with oppression as the message of what the performers experience.

A curated film, regardless of how many parts and scenes, cannot give an adequate sense of the cultural significance of Pather’s body of work. What the film did achieve was that it provided an impression of how Pather uses post-modern and avant-garde settings and scenarios to frame landscapes of defiance. The defiance is not empty, though. Through symbolism, choreography and theater, the work gives a sense of hope through performing art. 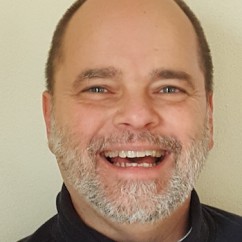 2021 Critical Dance Writing Fellow Dr. David S. Knowlton grew up in the world of marching bands, winter guards, and drum and bugle corps. Over the past thirty-five years, he has worked in eight states as a marching band show designer, choreographer, music arranger, artist-in-residence, and clinician for schools, universities, dance companies, and non-profits. He travels nationally to serve as juror and adjudicator of pageantry arts events. Since 2016, he has served as Program Director for the Briarcrest High School Outdoor Performance Ensemble (Eads, TN). Dr. Knowlton is co-host of The Learning Vibes Podcast (www.learningvibespodcast.weebly.com); Vice President of the Board of Directors at The Jacoby Arts Center, Alton, Illinois (www.jacobyartscenter.org); and professor of education at Southern Illinois University Edwardsville, where he researches and teaches in areas related to Educational Psychology, Design Thinking, and Creativity Theory. In all his efforts, Dr. Knowlton passionately advocates for the transformative power of creativity, the arts, and self-directed learning. Learn more: www.siue.edu/~dknowlt