Each year, See Chicago Dance hosts a discussion series called Moving Dialogs, with the goals of unpacking central issues in the dance community, and exploring dance as a means of broadening and deepening socio-cultural understanding in Chicago.

The most recent iterations of this awesome program have explored cross-cultural collaborations, the aging performative body, and women in dance. But Moving Dialogs events have typically been somewhat insular, limited in scope to topics mainly of interest to dance industry insiders. The series also took a hiatus last season, making its re-entree April 3 with a fresh new direction, meant to engage Chicagoans beyond the dance community.

The theme of this year’s series is “Culture in Motion,” conceived in partnership with the Chicago Cultural Alliance and hosted by Zachary Whittenburg, communications and engagement director for Arts Alliance Illinois. Each Moving Dialogs pairs a local dance company with a cultural institution selected from the Cultural Alliance’s consortium of 38 heritage museums, cultural centers, and historical societies.

Emily Reusswig, executive director of the Chicago Cultural Alliance, says the structure was developed between the Alliance and See Chicago Dance because they “share a common goal to foster new opportunities for innovation and collaboration in dance, art, and culture. We want audiences to feel more connected to the cultural heritage collections that reside in Chicago.”

In conjunction with Chicago Dance Month, the first of three Moving Dialogs events, which will take place monthly through June, teamed Chicago Dance Crash member Porscha Spells with Elsie Hernandez, the co-founder of the Haitian American Museum of Chicago (HAMOC) to create a new dance inspired by HAMOC’s collection. 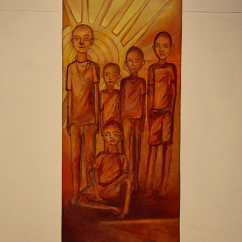 Approximately 80 people filed into the Buddhist Temple of Chicago across the street from HAMOC, entering to find Crash dancers KC Bevis, Elijah Motley, Kelsey Reiter and Kweku Bransah in denim hued costumes, warming up on a Marley floor laid in the center of the space. Chairs were positioned to watch from all sides.  A generous spread of Haitian cuisine, mingling, and introductions preceded the casual performance.

Each of the art pieces incorporated was displayed along the perimeter of the room, including four pieces by Jean Yves Hector (Hernandez’s nephew and a HAMOC featured artist), a Haitian karabela dress and peasant shirt, and items on loan from the Waterloo Center for the Arts. According to HAMOC’s website, the Iowa museum has the world’s largest public collection of Haitian art. Executive director Kent Shankle was in attendance for Moving Dialogs, on this, the final day of a special Rara exhibition at HAMOC.

Rara is a Haitian celebration taking place during the week of Easter – a musical street parade which processes through towns, cities, and the countryside incorporating hand-crafted instruments such as a bamboo trumpet called a vaksen, drums, maracas, and bells, as well as dancers and singers wearing brightly colored costumes.

After viewing two sections of a new dance, Whittenburg and Spells brought our attention to the aspects of particular art pieces used to create movement phrases, gestures, and formations in this, Spells' first choreographic effort for Chicago Dance Crash. For example, Hector’s “Children of the Sun” shows a father and his children standing in front of an image of the sun, used to create the opening tableau which Spells turned 45-degrees three times to show to each side of the audience. Hector's "Tet Ansanm,” translated as “heads together,” illustrates the power of the collective by showing three rocks and sticks used to create a strong structure – a version of “three heads are better than one,” and interpreted by Spells as connected partnering sequences. An untitled painting of a Rara parade by Gerard Valcin, a Haitian painter who got his start at the Centre d’Art in Port au Prince, provided the most literal connections between the dance and the collection, and for those unfamiliar with dance, the whole process demystified certain choreographic devices, perhaps answering some audience members' long-standing questions about “How did they do that?!?” 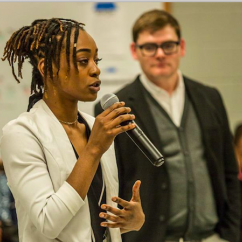 And then we got to manipulate and play Spells’ choreography – mixing up the order of its parts, changing the music, adjusting the dancers’ intent or having them switch partners to see what we might create together, then comparing our impressions with the original performance.

Also present was Dr. Mario LaMothe, a postdoctoral associate and curator at the University of Illinois at Chicago’s African-American Cultural Center, with expertise in Afro-Caribbean sacred and secular rituals, and the intersections of spectatorship, queerness and social justice in the African diaspora.

While his primary role was to provide additional context and expertise about Haitian culture and Rara in particular, LaMothe, who from 1999-2005 worked at the Brooklyn Academy of Music (BAM), commented on how black bodies – in a long-running series at BAM called DanceAfrica – are given one dedicated week in a year-long season of programming. Though it was a brief footnote in the larger context of this evening, LaMothe raises important questions about aesthetics in dance. “Contemporary dance” is a label applied often to ballet and modern dance, while forms rooted in non-Western cultures are rarely, if ever, deemed “contemporary.”

The specific topic of DanceAfrica came into larger view last summer following Gia Kourlas’ review of the 2017 DanceAfrica in the New York Times. Kourlas’ implication that African and diasporic traditions should remain “traditional” perpetuated a response by Temple University PhD candidate Charmian Wells, whose article published in Movement Research echoes LaMothe’s point that the roots of any art form are contemporary so long as they are created and performed by people of the now.

Indeed, lack of knowledge surrounding the discussion of black bodies and art forms in cultural criticism is a potential line for personal investigation which I extracted from this evening at Moving Dialogs. The point might have been to use Haitian art to inspire concert dance choreography and to familiarize audiences with the choreographic process. But the larger questions which extend from these specific pairings require intense, perhaps difficult conversations about cross-cultural collaborations between strangers and across art forms – each of which could easily turn into career-long pursuits.

Lauren Warnecke is the dance writer and critic for the Chicago Tribune.