This is Giordano, a unity of supremely polished dance artists so in tune with one another, when they aren’t actually dancing together on stage, they’re dancing with each other in spirit, which is one of the reasons why watching this company, you come away feeling uplifted.

“In these difficult times,”  says Nan Giordano, celebrating her 25th season as artistic director, “people going to see a dance concert deserve to feel good when they leave!” And feel good we do, but it’s not all light-weight fare.

Giordano Dance Chicago continues to forge ahead, taking jazz dance to new heights on the concert dance stage with two world premieres and an eclectic selection from its rich and diverse repertoire that span the gamut of human emotion, relationship, and the dynamics  of community.

Brock Clawson’s thrilling world premiere, “If I Could,” (performed Friday by Natasha Overturff Deny and Ryan Galloway, and Saturday by Katie Rafferty and Zachary Heller) is a psychological drama fraught with the contradictions of human relationship. Set to  Zoe Keating’s agitated cello strains, the piece cracks open the complex nature of intimacy. Opening the piece,  a woman struggles with the extremes of “take me/leave me,” her fiery angularity singed with sensuality and longing. Her male partner, more of the “take me” persuasion, doesn’t hesitate to meet her where she lives.  Tension between the two never lets up as they navigate between attraction and conflict, culminating in a heart-stopping aerial catch that gives physical meaning to the word “risk”  in this sumptuous duet. 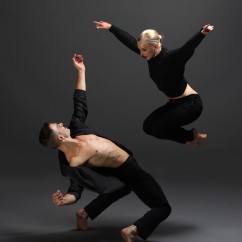 Ray Mercer plays a daring game of musical chairs in “Tossed Around,” his second world premiere for the company. (He created the racy “Shirt Off My Back” for GDC in 2015.) An original score by South African composer and performer Sbongiseni “Bongi" Duma drives this full company piece with the force of a ritual exorcism. Building from percussive drumming and vocal drones to a tortured duet for cello and piano, danced to  steamy perfection by Maeghan McHale and Devin Buchanan, the piece races to a rousing finish in a death-defying chair relay for full company.

Nan Giordano’s inspired retooling of “Giordano Moves,” (2005-reconstructed  2017) for 15 dancers from both the main company and Giordano II pays homage to the classic style of her father and legendary company founder Gus Giordano. Set to an original jazz score by George McRae, Nan Giordano’s reconstruction features Zachary Heller in a star turn that channels the essence of Gus’s power, energy, and earthy, space-sculpting movement.

Liz Imperio’s high-octane party celebrating the music and dance of her native Cuba, “La Belleza de Cuba,” created for GDC in 2013, stirs it up with plenty of sass, swivel hips, and shoulder shimmies.  The fast-paced combination of colloquial moves with plenty of attitude, and Cuban music and social dance easily transforms the rehearsal studio into a hot Havana nightclub.

Completing the program, a voice-over at the beginning of Autumn Eckman’s “G-Force” (2012) clues us in to a time warp where Planet of the Apes meets new-age robotics.  Primitive swings, crouching ape walks and robot-like mechanics characterize this exploration of the affect of acceleration on the body in motion.