There’s something magical that happens to dancers at the end of a season, when their bodies and minds are on the brink of exhaustion and summer vacations are just around the corner. It’s a magic I witnessed while taking in Giordano Dance Chicago’s last performance of the season Saturday night at the Auditorium Theatre, but I’ll get to that later.

For die-hard Giordano fans who’ve been following along, this program was nothing to write home about, only because we’ve seen most of this repertoire recently. Audience favorites included Ray Leeper’s sultry “Feelin’ Good Sweet” and Christopher Huggins’ 2007 “Pyrokinesis,” an electrifying closer, put into rotation and seen regularly since the company’s visit to the Dance Center in 2016.

Ray Mercer’s “Tossed Around” appeared in both the fall and spring programs at the Harris Theater this season, and I have to say, it looks really good in this nice, big venue. “Tossed Around” is exciting, to be sure, but it is barely saved from its clunky transitions and a cliché pas de deux, which has a twice-repeated, uncomfortable rub-down of the woman by her partner that I found, frankly, offensive. “Tossed Around’s” thrilling opening and lighting designer Jacob Snodgrass’ silky, amber-backed silhouettes in the lightning-fast third section of this piece, plus the exceptional dedication of the dancers to make it all work help this piece a lot, but I might rather have seen “Gruisin Suite” again instead, a 1993 Frank Chaves gem which came back in 2017 and was originally planned for this program in place of “Tossed.”

Instead, we got another look at Joshua Blake Carter’s “Take a Gambol,” a cute and quirky men’s ensemble piece with a classic brat pack feel premiered this spring, and “Giordano Moves,” choreographed in 2005 by Gus Giordano and restaged for the company last year. Both of these pieces really get back to basics, with all the high contractions, jazz hands and tuck jumps you desire. 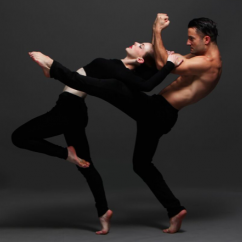 And for newbies to Giordano – those who, perhaps, only see dance every once in awhile – this program was a pretty great primer on jazz dance: clean, classic and uncomplicated. And as always, GDC performed with expertise and flair.

What makes the repetition tolerable for those of us watching these pieces for the umpteenth time is that magic I mentioned at the beginning of this article. Athletes at the top of their game train in such a way that they peak at just the right moment: bottom of the 9th, game 7 of the World Series. Newsflash, I know, but dancers are athletes, too, and this end-of-season performance asked a lot of them; heck, the company’s men were in five out of the six pieces performed that night.

So there’s something really satisfying about watching a piece evolve which has “lived” in the dancers’ bodies for awhile. A new dance can feel frenetic and risky. But here at the Auditorium, GDC’s typically amped-up performers were a bit more grounded and resolute. Their exhausted bodies repeated steps they’ve done hundreds, if not thousands of times before, trusting their experience and putting the performance on the cruise control. When it gets to this point, a dancer is almost unstoppable. They balance longer, they turn better, unisons are unflichingly together, facial expressions are more genuine. That was the case here, giving us an authentically awesome view of the exceptional talent at GDC. 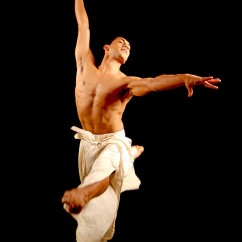 Caesar G. Salinas All that aside, hands down, the highlight of the evening was Cesar G. Salinas’ return to the stage. Salinas, who serves as GDC’s artistic programs manager, retired eight years ago. He came back for this one-night-only performance to dance Gus Giordano’s iconic solo “Wings” as a dedication to daughter Nan’s 33 years at the helm of the company he founded 55 years ago. With Salinas’ tanned skin and short cropped hair, you could almost imagine Gus himself up there performing the piece he made 40 years ago. It was made all the more special by a live performance of “Swing Low, Sweet Chariot” from the Bourné family, an acapella ensemble of mom Lisa Bourné and her eight children. These angelic voices sang standing in a half circle around Salinas for what was surely a perfect blend of this great dance company’s past, present and future.