Hedwig Dances’ “Of Time and Tide” wrapped up its two-weekend engagement at the Ruth Page Center with Victor Alexander’s “Parting Shadows”  and the world premiere of Artistic Director Jan Bartoszek’s “Four Strong Winds.”

Both works mine the company’s signature style of natural movement that camouflages its technical underpinnings in the ease and flow of the everyday. The dancers on stage are people, first and foremost, citizens of the here and now, who rise and fall, walk, run, roll and recover. But most of all, they listen to their bodies, and to each other’s bodies, as they navigate life.

In contrast to that ease and naturalism, “Parting Shadows” begins with mechanical gestures, four dancers moving in unison to the tick-tick metronome beat of Julia Kent’s sound score. As the beat layers rhythmic complexity, the dancers’ movement patterns diversify, each dancer becoming a cog in the wheel of a group machine, their movement tapestry playing itself out as the beat fades. A new sound overlaps, transitioning them to a new spatial configuration, the two men downstage, the two women diagonally upstage. Terence Marling’s artful sound design is an integral partner to the choreography as it pulls the dancers smoothly through an auditory tunnel from one feeling state and physical engagement to the next. 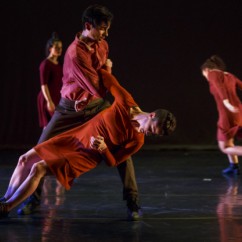 The central material of “Parting Shadows” concerns itself with relationships of vulnerability and support, control and manipulation. A catalogue of couplings has the dancers falling and catching one another, dipping and dodging with everyday ease, sweeping arcs of legs over spines and arms across space in a steady state energy that breaks only occasionally.  A program note tells us that “Parting Shadows” is about illusion and perception, deriving its inspiration from Plato’s parable of The Cave, where shadows are the only reality. Alexander’s physical realization of this idea centers on the use of weight, both literally and metaphorically, as weight drives both movement invention and the nature of the dancers’ relationships with each other.

Bartoszek’s “Four Strong Winds” is a bittersweet exploration of  seasonal change, the passage of time,  and its effect on the human condition. The piece opens with a woman seated on the floor in a puddle of leaves in what must be Fall. Chimes accompany more leaves falling from above, a poignant image as the woman sifts through them with her hands, savoring the tactile sensations. A man with a broom appears, dressed in a flannel plaid shirt and khakis, to sweep it all away in perfunctory style. The music stops. Other dancers enter through the audience, pausing to interact with members of the audience, then join him and take up the task, each taking a turn, sometimes fighting over whose turn it is, until all the leaves are swept over the edge of the stage and into the front aisle of the theatre. They take off their shirts and thrust them to the floor, then pick them up again and put them back on in a frenzy of dressing and undressing, hot and cold.

The sound of water signals the rainy season, and a parade of paper umbrellas introduces the next section.  The women ride on the shoulders of men in trench coats, obscuring the men’s heads. The sound of wind ushers in a man wearing every item of clothing he has, topped by a winter parka.  He dances a solo of despair. A couple in winter coats comes to his aid, but nothing seems to help in an extended sequence of lifts and falls. A striking projection of a snow-covered street from under Chicago’s “L” tracks appears on the back wall of the stage, prolonging a sequence that recalls the agony of a Chicago winter that doesn’t know when to move on.

Generalized “drama” drives home the quandary of what to do about the weather. Is it hot? Is it cold? Weather becomes the metaphor for the existential mire of the human condition, necessitating human interaction and mutual dependence. A sense of vacancy and loss goes on a bit too long, with too much non-specific stage movement devoted to feeling depressed about it all.  A quality of lament hovers throughout these segments, relieved in part by an abundance of blossoms flooding the stage for the Spring segment. Similar to the dance with overcoats, the dancers become inundated in a flower frenzy, creating little dramas that have less choreographic form and more pantomime. Luckily, summer saves the day, warming the stage with harmonica blues for a carefree tumble in, on, under, and across an astro-turf rug. Sundresses and smiles abound in a dance that might have wanted to reinvent itself as poetry. 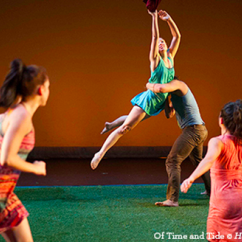