Corey Smith’s “The New Prairie School” is a trio – featuring Smith, Clare Saxe, and Ethan T. Parcell. But it’s also a duet. The performance, which took place June 2 and 3 at one of few remaining north side mansions on Sheridan Rd. in the Edgewater neighborhood, is a pas de deux between a house and the humans within it. So much of the “The New Prairie School’s” setting was pivotal to the performance, and sometimes, vice-versa, which made for a compelling couple of hours on a beautiful evening near the lake. Don’t call it a trend, but this was the second such experience I’d had – that is, an immersive performance in a gorgeous north side mansion – in the span of 10 days.

“The New Prairie School” was part of a larger event produced by Pivot Arts, a 10-day festival celebrating arts and culture in the Edgewater neighborhood. Alderman Patrick O’Connor has been a friend to the arts in recent years; Edgewater is booming with storefront theaters – the Raven, Rivendell, Red Twist and Jackalope Theatres to name a few – plus a recently converted Ridge Ave. firehouse, which sat abandoned for years until it was recently converted by Chicago Filmmakers. Pivot Arts has likewise brought attention to the neighborhood, using established venues as well as lesser-known gems in an annual fest highlighting the unique cultural tapestry of the neighborhood.

Designed in 1909 by architect George W. Maher, the original occupant of the Colvin House was manufacturing magnate Harry Stevenson. Two years later, the Colvin family bought the home at 5940 N. Sheridan which now bears their name. The property was designated a Chicago landmark in 1994, but had fallen into disrepair. As a resident of the neighborhood (and self-proclaimed fan girl of historic homes) I had passed this property many times with curiosity, gazing at its wheat-hued façade and unkempt grounds with dismay.

The American Foursquare, a product of the Prairie School which was meant to elucidate a style of architecture that was definitively American, was brought back to life through an extensive renovation project and is now home to new occupants: Creative Coworking. Colvin House’s insides don’t match the relatively modest exterior, due to a renovation in the 1920s which turned the place into an incredible example of the gauche Spanish revival going around at the time.

So, look: See Chicago Dance is a platform for writing about dance. And I’m not an expert on architecture, but neither is Smith, and since the Colvin House is the critical centerpiece of “The New Prairie School,” that shall be the case here, too. But what’s sort of interesting is that it didn’t start with Colvin House. Smith began to develop some of the building blocks of “The New Prairie School” last year, culminating in a performance at Links Hall.

Abandoning Links’ white box for the ornate interior of the Colvin House was perhaps the best thing that could have happened to this piece; the elements of the performance are OK, but they’re masterful when performed from a too-small bathtub encased by a lavender tile surround - Smith playing a tiny Yamaha keyboard and singing a heartfelt tune while I contemplated resting my feet by taking a seat on the porcelain throne against which I was smooshed. 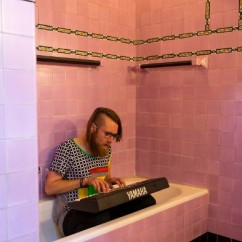 Maybe I’ve gotten ahead of myself. That metaphor about having complexity inside the house and simplicity outside, that’s the one I’ll focus on in talking about this music/physical theater/ architectural tour traveling through the nooks and crannies of this magnificent home.

After surveying from the driveway to the east-facing front of the home, Saxe, Parcell and Smith took up megaphones to offer tidbits on the home, plus references – some abstract, some literal – to the horizon line of the lake a half block to the east, or historical events of 1909 (the year the house was conceived). Perched from the Juliet balcony on the third floor, and having thrown a trail of butcher paper with a streaky blue line to hang from said perch, Smith asked a few rhetorical questions, to which he received answers from the other two performers on the ground level (e.g. “Do we like the Midwest?” “Yes!”).

The core of Smith’s investigation involves a chance operation, which was carried over from the original stage performance at Links Hall. In it, each performer chooses a ball from a tiny bingo cage in the foyer, which indicates a “knee” or performative tidbit to be completed. The trio tries to do as many of these as possible, with favorite knees including an original song all three perform on preschool instruments, and a plea for Peter Sagal, the host of “Wait, Wait, Don’t Tell Me” to make himself known: “Is Peter Sagal here?” Each of those happened twice, in addition to many other random bits of chaos.

During this time, we were also invited to snoop around the ground floor of the Colvin House, which most did with giddy delight. After another song, dance, and lots and lots of text, we were broken into three groups to explore other parts of the home. Smith was the docent for my group, which is how I ended up smooshed against that toilet listening to him sing in the lavender bathroom.

In the night’s most poignant moment, Smith took us to the third floor – the former servants’ quarters – and as he canted Native American origins of the tract of land on which this property stood, we were encouraged to step out onto the Juliet balcony, gaze out at the lake, and reflect on the dichotomy of its beauty juxtaposed with the coup d’états that contributed to the creation of a skyline we know and love today.

If I have one complaint about “The New Prairie School,” it’s this: It’s quite clear to me that each of the performers has formal training in music and theater – in dance, not so much. Their movements, generally consisting of bouncing from the knees and cheerleader-esque arm jabs in literal reference to the horizon, are an afterthought; in fairness, this is a failing of performance art in general rather than a specific problem for Smith. And the quirkiness of these movements was annoying in some moments, but more often, endearing. Nonetheless, I still wonder at how movement could have held a more prominent, embodied place in this multidisciplinary evening.

So, the dancing didn’t amaze, but what “The New Prairie School” did do was give me insatiable curiosity about my neighborhood, my city, and the Midwest, which is perhaps why this summary took me so long to write.