If you’re looking for a dance date that elevates your feelings about the essential truth of the human experience in a perfectly balanced, choreographically rich and stunningly executed program, make a date with Hubbard Street this weekend (Thursday-Sunday, March 16-19, Harris Theater). The beautifully constructed program casts its light on four distinctively different gems, each radiant and sparkling with unique qualities, and yet delivering together an especially cohesive and satisfying evening of dance.

Maybe that’s because, in today’s climate, we come to the theater collectively hungry for evidence that hearts and minds are still seeking more than the sum of getting and spending, still alive with the need for human touch, the sustenance of love, and the reassurance that the human spirit can survive a constellation of clashing worlds.

It is the unrest on stage, not peaceful harmony, that quickens the audience’s breath and delivers the kind of catharsis that dance, at its best, synthesizes in its unique alchemy of time, space, and infinite variations of the human body in motion.

Crandall’s program opener launches a squadron of faceless, black-clad  dancers on a robotic march to Tábor Radosti’s relentless beat, then shifts  to the rock ’n roll antics and comic relief of “Nitty Gritty.” The orchestra pit serves nicely as both game-changer and dressing room, where the dancers can peel down to next-to-naked skivvies and re-emerge, completely vulnerable, to the poignant strains of Bach’s Goldberg Variations. It becomes a dance about the intimacy of touch and the inevitability of aloneness in which the sound of the audience breathing is the only remaining accompaniment to a prolonged segment of silence. Building toward a fever pitch that unleashes the restraints of the opening regimental march, movement accelerates to company dancer David Schultz’s live, on-stage percussion. Throughout is a pervasive desperation, the almost-futility of fighting for life, as the curtain drops, leaving a twitching limb that has escaped its finality.

Nacho Duato’s “Violoncello,” a  duet from his “Multiplicity. Forms of Silence and Emptiness” (1999) opens the center section of the program with Florian Lochner, the “cellist,” in 18th-century wig and waistcoat, inviting Ana Lopez, in simple practice leotard, to take a seat on his lap. What ensues is a marvelous recital of Bach’s Suite No. 1 for cello in G major, Lochner “playing” Lopez, his bow moving her limbs, sawing across a calf or thigh, tickling every nuance of musical brilliance from her body. The covert eroticism combines with Duato’s unabashed love affair with Bach’s music to create a unique and totally captivating integration music and dance.

His “Jardí Tancat” (“shut garden” in Catalan), composed for three couples in 1983, begins in silence, the group in prayer-like bowing and supplication. They are a peasant farm community, the women in simple, flowing full-length skirts and long-sleeve blouses, the men in loose slacks and shirts. A rim of rough-hewn sticks of irregular height, the merest suggestion of a fence, defines the boundaries of their lives. In movement reminiscent of classic 20th-century modern dance pioneers Doris Humphrey and José Limón,  a distinctively Spanish motif emerges in the gestural imagery of arms obliquely arched overhead, or elbows drawn up sharply behind shoulders, palms facing up, heads lowered. The swoosh and flare of the women’s skirts accentuate sweeping arms and spiral turns, deep lunges, and sudden springs from crouch to standing. The everyday movement of work tasks typifies the days and lives of the community in strong attack and rhythmic accents that mimic the emotional landscape of the Catalan culture, set to María del Mar Bonet’s hauntingly beautiful instrumental and vocal music. An especially moving duet for breathy and passionate Jessica Tong and superbly lyrical Jesse Bechard focuses the loosely narrative thread of the piece as they testify to life’s harshness, pain, and urgency. 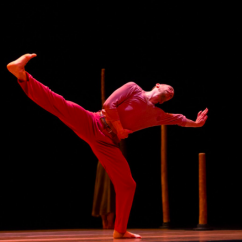 Pite’s “Solo Echo,” inspired by Mark Strand’s poem, “Lines For Winter,” closes the program. Set to two Brahms sonatas for cello and piano and framed by a backdrop of falling snow, the dance is a passionate journey “to the tune your bones know….” (Strand). Pite, like Crandall, uses the pedestrian convention of running, and the poised “get ready, get set” crouch of runners about to begin a race, but unlike the aimless race of Crandall’s automatons, Pite’s runners skid and slide headlong into each other and human intersection. Her stationary sculptural formations ignite the space with stunning stillness and visual complexity that fractures into sequential group movement. The ensemble, in sweeping leg arcs over and around each other and a constant push-pull threading though bodies, repeatedly rescues the lone straggler, but ultimately, the piece seems to say, we die alone. The quick turns, splayed body angles, abrupt gestures and forceful attack contrast with the almost nostalgic lyricism of Brahms’ music, which serves to evoke the environment of Strand’s poem. There is a poignance to the dancers’ open mouth silent call to “tell yourself/in that final flowing of cold through your limbs/that you love what you are.”

Calling All Writers! Share Your Story In the spirit of Chicago Dance Month, SeeChicagoDance is devoting the month of April to YOU, our readers.  We will be publishing personal essays and stories written by YOU about any and all aspects of dance throughout the month. Deadline: April 1st. For details and submission guidelines, see "Community News," or contact editor@seechicagodance.com.