But it wasn’t just the breathtaking poignance of Cerrudo’s choreography or the poetic imagery of dancers kicking up sparkling droplets of water in fluid arcs of movement. It wasn’t just appearing and disappearing, as if by cinematic magic, through a curtain of vapor, with duets reconstituting as trios, quartets dissolving into duets, and ephemeral bodies vaporizing in the mist. And it wasn’t just the spontaneity and utter perfection of unfolding weightlessness rippling through the dancers’ spines. It was everything that came before it as well. 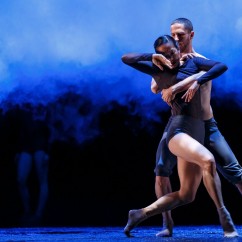 It was the intimacy of the duet  from Lucas Crandall’s “Imprint” (2016), the nearly nude vulnerability of dancers Emilie Leriche and Jesse Bechard grazing each other’s skin, the planes of their bodies encountering each other’s shape with the accelerating enthusiasm of first time lovers against the patient piano of Bach’s Goldberg Variations.

And it was  the unrelenting urgency of William Forsythe’s “One Flat Thing (reproduced)” (2008), propelling the dancers in brutal bootcamp maneuvers around, between, on top of, and underneath twenty steel tables with gymnastic precision to Thom Willems’s  moto-perpetual electronic score.

And it was what came after. The whole program, spanning Crandall’s most recent “Imprint”, all the way back to founding director Lou Conte’s iconic finale, “The 40’s” (1978), provided a reverse chronology of works from each of the company’s four decades. A sense of continuum built throughout an artfully-paced evening that interspersed longer oeuvres like  Cerrudo’s “One Thousand Pieces,”  Forsythe’s “One Flat Thing” and Twyla Tharp’s “The Golden Section” (1981) with short gems like Crystal Pite’s heart-wrenching “A Picture of You Falling” (2010), Jim Vincent’s lyrical excerpt from “Palladio” (2007), and Conte’s Broadway-tinged duet “Georgia” (1987). 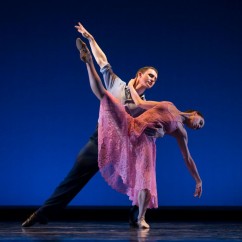 Hubbard Street, in peak form as an ensemble, has never been stronger, with individual dancers distinguishing their versatility in repertoire that demands gymnastic athleticism, virtuoso ballet technique, and mastery of modern dance and jazz idioms.

Jesse Bechard’s portrait of the human soul as a car-wreck in Pite’s solo excerpt from her full-length “The You Show” never ceases to bring tears to my eyes. Bechard’s performance has deeper impact on each viewing, with each wildly distorted cataclysm of the human heart on auto-pilot self-destruct. 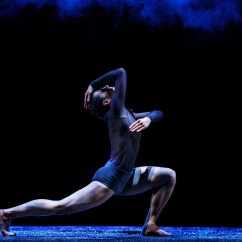 Jacqueline Burnett’s silken spine and Jason Horton’s nostalgic adoration of her strength in Conte’s “Georgia” gave a sweet nod to musical theater tradition, while Alicia Delgadillo had more bounce to the ounce than a rubber ball in Conte’s wonderful tribute to “The 40’s” social dance forms.

Jessica Tong’s lithe spirit understood Tharp’s crazy-juiced blend of ballet and jitterbug shimmies in Tharp’s “The Golden Section.” The Tharp project of the 1990’s, one of Conte’s most notable collaborations for Hubbard Street, was a logical partnership for two choreographers who were both bridging idioms of ballet, jazz, popular social dance and pop music on the concert dance stage, although with distinctly different stylistic results. The Tharp Project arguably put Hubbard Street on the international dance map and irrevocably raised the bar for dance in Chicago.

My one small quibble with the performance of the Tharp work is that the company didn’t have it in their bones and blood the way they did the rest of the evening’s repertoire. They have the technical chops to master the quirky demands of Tharp’s breakneck ballet, but they never entirely captured her wickedly difficult idiom shifts that require going from rigidly upright to meltingly flaccid and back again with the facility of those dolls that collapse at the push of a button and snap back into place upon release.  Even so, their performance of Tharp’s work added perspective to the breadth of Hubbard Street’s accomplishments and capabilities. 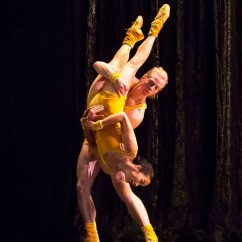 On the whole, palpable affection for the evening’s choreography, for each other, and for the company that has evolved over 40 years seemed to infuse each individual performance with an extra measure of meaning, contributing to a heightened sense of the present that lifted their performance into the realm of the transcendent.

After-tones of the entire evening’s continuum echoed into a perfect starlit night where, for the brief time that its aura lingered, all was right with the world.

For details and tickets, go to seechicagodance.com and click on "Upcoming Events."