All three segments  feature original music by composer Devonte Hynes. Third Coast’s four musicians and their complement of xylophones, marimbas, vibraphones, drums, and various other ticks, tocks, chimes and electronic toys add their own choreographic element to the movement on stage.

Choreographic style, movement vocabulary, and musical environment flow seamlessly from one piece to the next, giving the effect of one continuous, evening-length piece. This was both satisfying and problematic. While subtle differences of dynamics, group action, and spatial design distinguish “There Was Nothing” from “For All Its Fury,” the many similarities between the two pieces, including their music, verge on a sameness that at times becomes repetitive. 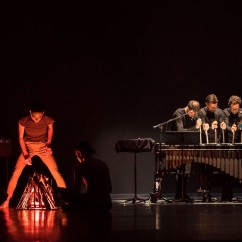 "There Was Nothing" (choreography by Jon Boogz and Lil Buck) Boogz/Buck’s modern extrapolation of the Bible’s creation story, “There Was Nothing,” references Genesis: “In the beginning…,” but also comments upon itself and what we have done to Mother Earth.

As the piece opens, light from the glowing embers of a fire reveals Adrienne Lipson’s spell-casting movement in the role of Shaman/Mother Earth/story-teller. We are instantly thrust into the world of mystery and magic, invited guests at the campfire, witnesses to the pageant of our origins. It's a great opening grab for our attention, and grab it does, holding rapt attention throughout its evolutionary trajectory. 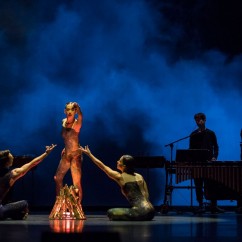 Adrienne Lipson in "There Was Nothing" The voice of poet and spoken word artist Robin Sanders begins the tale. Mellifluous cosmic chords punctuate Lipson’s movement with “Lost In Space” wonder as she stirs her magic over the fire and conjures up an entire universe. The musicians slowly enter the space to assume their stations at the various instruments, a single embryonic body hatches, and human life begins to unfold. Man evolves, Woman appears, the apple is eaten, and the serpent is off and running in the Garden of Good and Evil.

Double pirouettes and explosive leaps combine with gestural arm jargon in a language that illustrates the narration with inventive sign language, both telling the story and bringing the world into being. 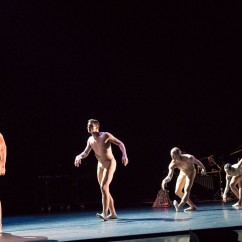 "There Was Nothing" In one of its more striking moments, we see the evolution from primate to human being in the iconic imagery of “The Ages of Man,” with a single-file line of near-nude bodies traversing the stage from crawling to stooping, to standing.

Then, suddenly, they have suit jackets and cell phones, blueprints and coffee on the run, and the beautiful world has run amuck with pollution and discord. A bit of a cliché, but I’ll give it to the choreographers. They’re telling the story of Mother Earth and how mankind has messed it up, and up to this point, they’ve done a great job of telling it. That it devolves into a bit of preachy rhetoric in its somewhat fuzzy ending is a forgivable offense, as long as the dancing is phenomenally wonderful to watch, which Hubbard Street dancers, in their estimable versatility, continue to be.

Rippling undulations of garden-hose arms, elastic legs, pliant shoulders and spines drizzle into space with the liquid ease of silly putty. A hybrid blend of Hip-Hop, breakdance, jazz, and modern dance startles in an intriguing body-parts inventory that leaves no bone unturned. The movement serves the story’s theme of wonder and self-discovery well, at least up until the Great Fall of humankind into wanton lust for power and domination. 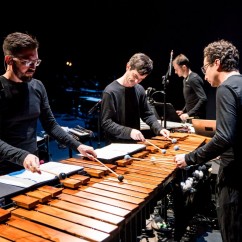 Third Coast Percussion “Perfectly Voiceless,” Devonte Hynes’ Third Coast-commissioned rhapsody for percussion, continues his Philip Glass-inspired layering of  melody and rhythm without benefit of dancers. Taken from a line in the poem “Mushrooms,” by Sylvia Plath, “Perfectly Voiceless” is very easy to listen to and soothingly meditative, but the repetitive instrumental interlude went on too long to sustain interest without the essential component of its dance partners.

It’s a visual relief when David Kim’s huge painted fabric panels descend, setting the stage for “For All Its Fury,” also inspired by Plath’s “Mushrooms,” with voice-over narration of lines from the poem. Choreographic wunderkind Emma Portner's “For All Its Fury” made much more sense once I had read the poem at home after the performance.

Lines like “Nudgers and shovers” and “We diet on water/Our toes our noses/take hold of the loam” go hand in hand with Portner’s version of body-parts inventory, where bodies grope space with an earthy determination to penetrate the cold cruel world. 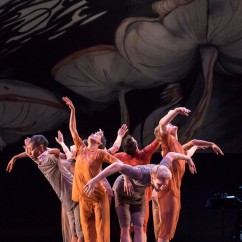 "For All Its Fury" The unmistakable ear-marks of storytelling urge us to seek a unifying narrative construct as the tension ramps up. There is a hierarchy of characters, from the malevolent, cane-wielding manipulator to Rena Butler's magnificent organic enabler, as fragments of fraught mini-dramas escape momentarily from behind the hanging panels. Alas, there are so many dramatic and choreographic ideas afoot in this march to vegetative liberation, we hardly know what to make of it when finally, at its culmination, the panels reveal giant mushrooms. Who knew?

Portner uses her set and props imaginatively, with choreography unfolding behind the panels and spilling into the spaces between them to reveal intriguing constructs of floating bodies and disembodied arms, hands, and feet. Full-stage segments of ensemble movement include an interlude where all the dancers are attached to strips of fabric that both limit their freedom and connect them to one another in a living, breathing cat’s cradle.

In an inspired but undeveloped opportunity, the dancers interact with the musicians in an exchange of hand-held tone-bells, an all-too-brief rhythmic collaboration that promises more.

Fragments of the poem’s last line, “We shall by morning/inherit the earth/Our foot’s in the door” end the piece with a sense that the drama has moved from restriction to freedom, from tension to liberation, from trepidation to relief.

The collaboration of three choreographers, composer, and musicians is not the unmitigated artistic success Hubbard Street had no doubt hoped to achieve, but the initiative to mount such an ambitious project is something that we must applaud and encourage, with the caveat of a need for further cultivation and tilling of the soil.

A small note: both choreographed pieces employ voiceover narration of poems, not always completely audible, resulting in an abstraction of language and story which, to be generous, may be deliberately ambiguous, but is too often unfortunately unintelligible and distracting. It would have been helpful to have both texts in the program notes, or even incorporated into the scenic design.