The three-piece, curated program gave Chicago audiences a first-time viewing of the full-length “A Picture of You Falling” (2008), and an in-depth exposure to this dance maker’s curious process and unique choreographic voice with “The Other You,” (2010) and “Grace Engine” (2011).

The evening’s dramatic triptych unfolds like a three-act play, not only because of the continuity of movement language, costuming (black business suits) and subject matter across the palette of all three pieces, but because of the narrative structure and theatrical scenes that comprise them.

Extremes dominate all three pieces, with huge back-bending body arcs, vast sweeps of legs, violent arm circles, and brutally sudden level changes, often with a spiral twist throwing the works wildly off-center. It is this wild off-centeredness that gives all three pieces a thrilling edginess and thrusts the audience into Pite’s world of dark uncertainty and emotional vulnerability.

Previous Hubbard Street seasons have given us several tantalizing forays into that world, in the solo excerpt from “A Picture of You Falling,” first performed by Hubbard Street in 2014, and in the hauntingly beautiful ensemble piece, “Solo Echo” (2012), which Hubbard Street took on in 2015.

Presenting an entire evening of one choreographer’s work, especially one as multi-layered and complex as Crystal Pite, gives us a fuller appreciation of what makes them so special, but it also exposes their choreographic habits, fall-backs, and obsessions.

The mechanics of isolating body parts seems to fascinate this choreographer, as well as the dancers and audience, and drives the quirky non sequiturs of Pite’s lexicon. Her gigantic gestures come rapid-fire and completely devoid of emotional overlay. And yet, or perhaps all the more, the result is an emotional wallop that penetrates to the core and resonates with the deepest sense of human devastation, desperation, and fear.  Pite’s choreographic synthesis of the human condition from the stuff of relationship and an almost scientific investigation of the mechanics of movement is perhaps the most striking aspect of her originality.

On Thursday night, Jacqueline Burnett and Elliot Hammans navigated a jigsaw puzzle of broken hearts in “A Picture of You Falling” with breathtaking poignance and brilliant command of Pite’s challenging movement. 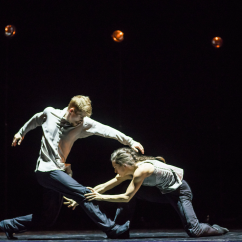 Elliot Hammans and Jacqueline Burnett in "A Picture of You Falling"

The solo excerpt, which I had seen multiple times, never failed to move me to tears. Seeing the piece fully fleshed out as a duet gave even deeper meaning to the story of a relationship, the manipulation of intimacy,  and the brutality of separation. The solo, cobbled together from various segments of the full duet, worked well as a piece about one crystalized moment in time and space, while the duet, expanded in spatial design, movement vocabulary, and narrative text, was largely an illustrated narrative, spliced across time and space through the selective filter of memory.

The point of view remains that of the man, although his female partner is an active catalyst in their explosive chemistry. In a stunning example of Pite’s ability to use visual metaphor to create a layered portrait, we first see the woman only as an upstage shadow, as if in distant memory. Later on, the man sees himself as his own shadow in her memory as well. Then in flashback, the two engage in real-time scenes, fluid and vigorous with expansive use of the full stage, exaggerated gesture, fast leg extensions, jumps, and abrupt shifts of level and focus.

Kate Strong’s dispassionate delivery of Pite’s original text serves as alter-ego, subtext, voiced memory, and as a third, unseen character— the mirror of truth?—all rolled into one. The spoken text pairs magnificently with Owen Belton’’s score of automotive sound effects and the choreographic car-wreck that seems to produce it. Usually, we think of a break-up as wrenching two people apart, but in Pite’s world, this couple wrenches each other together as well.

The ambiguity of mirrors forms a dominant image in “The Other You,” performed by Andrew Murdock and Michael Gross in a psychological portrait that suggests the puppet/puppeteer relationship of man to himself and to another. A quasi-mime theater element governs the movement, in which a solo male figure, collapsed on the stage floor, brings his own body to life through gesture, not touching, but, like a puppeteer, as if by invisible strings. Pite’s fascination with the mechanics of movement continues, using space and touch to explore manipulation and dominance in relationship. A second man appears behind an empty frame, in mirror image to the first, perhaps himself, or another. The projection of self onto another forms the core of this study, where tactile manipulation alternates with remote-control. The projection of self eventually takes on a life of its own and morphs into “the other,” moving in and out of each other’s “mirror” with varying degrees of discord and harmony.  Owen Belton’s sound design of street noise, a dog barking, crickets, and footsteps culminates in the extended rigor of their duet to the lilting strains of Beethoven’s “Moonlight Sonata,” and a brief descent into a mongrel state of snarling and barking at each other. 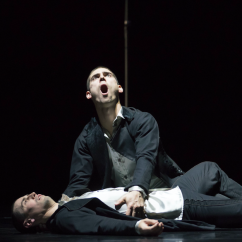 Andrew Murdock and Michael Gross in "The Other You"

Bolton’s score for amplified footsteps, locomotive train engines, and rhythmic wheels over tracks forms an auditory landscape of vast space for “Grace Engine,” performed by the full company of fifteen dancers.  In a strange but not unwelcome way, by the end of the evening, familiarity with Pite-isms had conditioned us to expect the unexpected, with threads of “Solo Echo” and “Picture” creeping into the fabric of “Grace Engine.” The element of surprise was perhaps not as significant as it would have been, but then other aspects of the piece captured our attention, like the use of linear columns of dancers facing off and merging, domino geometrics, and chains of bodies linked by arms and elbows in slinky elasticity. Fear of something “out there” propels mass group running and the “on-your-mark-get-set” stance of frozen sprinters about to take off. The wide open-mouth and splayed fingers of “Solo Echo” reappear here, with the addition of silent mouthed words. Here, Pite’s world is a scary place where the mechanics of human effort square off against the insurmountable engines of industry, not an especially happy ending to an evening of wrangling with the darker recesses of the human psyche, but marvelously uplifting, even so, for Pite’s unique ability to tap into those places and carry us through them intact, and for Hubbard Street’s magnanimous delivery of these gems. 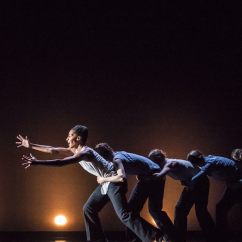