Continuing the creative momentum of “Inside/Out,” initiated by his predecessor, Jim Vincent, to give company dancers an informal forum to exercise their choreographic muscles, Hubbard Street artistic director Glenn Edgerton instituted “danc(e)volve,” in 2012, incorporating the most developed of those works into main company programming.  The creation of Hubbard Street’s Choreographic Fellows program furthers this initiative with support and resources for designated dancers to choreograph on the company, and to mentor and teach in the company’s HS Pro professional development program.

Evolve means “to change or develop gradually.” In the spirit of evolving, three of the four works presented on the program take a highly personal approach to that process, some more evolved than others.  Each of the three choreographers seems to be grappling with core issues of identity—“How am I who I am, and what defines me?” 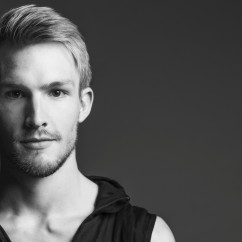 Florian Lochner German-born Lochner’s “Das Feld” is perhaps the most structurally developed of the four, the movement itself evolving in complexity and breadth with the soundscape of ideas that generate it. “Das Feld” is cradled in the compelling world of the dancers’ voices, beautifully designed by his colleague, Ms. Klock. The dancers’ overlapping voices create an abstraction of words, ideas, and feelings that lend a deeply personal quality to the movement, resonating with honesty and naturalism in answer to the questions Lochner had asked them in rehearsal about their lives, how they want to be remembered, their relationships, who is most important to them, their families. A subtle collage of musical excerpts weaves in and out, recurring drums suggesting a human heartbeat, chimes creating a sense of connection across time. The piece begins with lighting designer Kaili Story’s striking low ceiling of lights, which gradually lifts over a deep stage filled with nine company dancers and thirteen pre-professionals from the Hubbard Street Professional program (HS Pro). 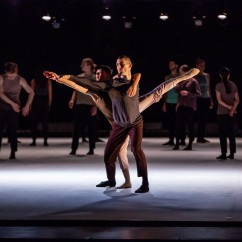 Adrienne Lipson and Michael Gross in "Das Feld" Freeze-frame gestures arrest the flow of group movement as their speech contemplates how they want to be remembered when they die.  Michael Gross and Adrienne Lipson emerge in a stunning central duet set to their own voices, a partnership of endearing dips under each other’s arm. The movement is amplified in other body parts and reflected in group movement as the dance evolves, lovely in its emotional understatement of tender affection and powerful in its attention to the individuality of the two partners. Lipson’s gamine vulnerability contrasts with Gross’s agitated self-probing. Lochner reveals a distinctive choreographic voice in “Das Feld,” with movement invention that blends caricature and mime-like gesture with lush dancing, challenging physical limitations of range and energy.  Momentum builds with a mid-section human chain that forms and reforms, breaking apart as individual dancers peal off in athletic running and then recombine in a mime freeze.  This evolves into multiple clusters of freeze-frame groups. A lone female catalyst separates and repositions their formations in an increasingly frantic upheaval of breaking apart and recombining. A unison interlude drives the full ensemble back onstage for a flowing finish interspersed with abrupt stops, slaps, hand flaps and angles that earn its culminating message: “Our purpose is to take care of each other.” 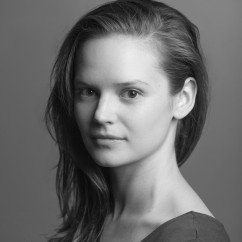 The best part of Alice Klock’s “Fold Me” is her mesmerizing use of costume designer Jenni Schwaner Ladd’s red-hued hooded shirts, which function as props, costumes, and metaphor, enveloping individuals in each other’s drapery. Here again, the integration of one theatrical element with another gives structural substance to the choreographer’s vision: the convergence of multiple versions of the self. These include the exalted and the impaired, the sure and the halting, the anguished and the triumphant. Just as the fabric of their shirts stretches and pulls to its limit, so does Klock’s movement pull the dancers to their extremes in split-leg penché arabesques and unison renversés that pull them from the floor to standing and back again. Couples mirror each other in magnet-like opposition. The five dancers seem to climb in and out of themselves in a kind of perpetual motion machine of time and space, intriguing to watch, but unresolved. 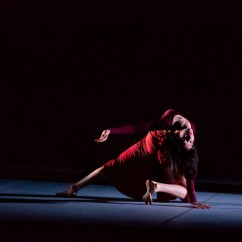 Adrienne Lipson in "Fold Me"

“Common Thread” is a joint choreographic effort between Lochner and Rena Butler, incorporating movement from each of their individual works for the combined HS Pro classes of 2018 and 2019. The piece served as a showcase for the thirty-four accomplished pre-professionals, but little more than that. Lochner’s now-familiar movement, removed from the structural context of “Das Feld,” begs the question, when does running on stage become a modern dance cliché.  In “Das Feld,” the athletic running was purposeful, serving to thrust the dancers forcibly away from and toward each other. In “Comon Thread,” it was just running, something we see all too often as fall-back connective tissue. 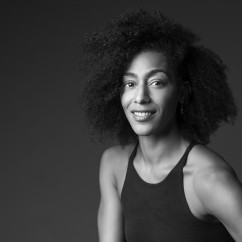 Rena Butler Butler’s “III. Third” begins with a bang—two dancers entering from opposite aisles in the audience speaking simultaneous monologues, one in Spanish, one in English, each reflecting the effect of being “other” as immigrants in America. “I’m tired of being called ‘the Asian girl,’” Connie Shiau concludes, once she arrives onstage, setting up the expectation that more of her story is to come. Alas, not really. Instead, we are treated to a raucous, entirely fun and choreographically clever panorama of melting-pot street dance, hip-hop, get-down attitude, and pure funk. This too gives way to yet another segment, this one beginning as a male duet, with Shiau joining to create a sensual, slinky trio that morphs into a voice-over monologue in Chinese.  The piece de-volves, rather than e-volves, into a wild party, a kind of nightclub for the dispossessed that culminates in a sudden stop, then resumes in slo-mo group movement to the lyrics, “Focus on me.”  “III.Third,” Butler’s third piece in a trilogy of dances exploring gender, sexuality, race, and culture, bites off more than it can chew, with a lot of energetic dancing for the full complement of Hubbard Street and HS Pro dancers, but not focused enough to sustain cohesive meaning.  Here is a piece with promise that, perhaps given the time, will evolve enough to clarify what its creator really has to say.