Hubbard Street’s fall season at the Harris Theater (through Sunday) has the cohesion of an art exhibit perfectly arranged to engage the viewer in a journey that reveals, entertains, and exposes the imagination to the wonder of discovery. New ideas, or at least new combinations of ideas, suggest themselves at every turn, including world premieres by Brian Brooks and HSDC resident choreographer Alejandro Cerrudo, and second helpings of two recently-performed  Jiri Kylian works.

The superb Hubbard Street dancers bring seasoned refinement and richness of interpretation to a program of impeccable choreographic integrity, but the care taken in program structure is as much a factor in creating an evening of such strong impact.

The order in which we encounter each piece has as much to do with how we perceive any given work as the individual piece itself. Ideally, each piece informs and influences perception of the next, which was the case with Thursday night’s performance. As with an art exhibit, our experience of color, light, line, shape, and composition is a cumulative process and not just a collection of isolated images.

The four stunning works on display, each distinct in its own way, are arranged to highlight the uniqueness of each while maximizing the organic connections from one piece to the next.  Common threads of shape, rhythm, flow, and relationship of movement to sound made for a steady evolution of provocative imagery, beginning with the tentative female flutterings of Kylian’s  “Falling Angels” and masculine bravado/abject fear of “Sarabande,” and culminating in Cerrudo’s other-worldly laser landscape. Between intermissions is Brooks’ fractal  “Terrain,” his first commissioned work as the inaugural Choreographer in Residence for the Harris Theater.

Depending on your particular dance receptors, you could assign a dominant theme for the entire program, viewing each piece through the lens of shape, for instance. Non-linear in concept, each piece creates a complex visual canvas dominated by the shape of the human body in solo, tandem, or group formation.

“Falling Angels” relies on straight lines, angular arm and leg gestures in disjointed impulses, hitting successive beats in Steve Reich’s percussive score, and gradually building in spatial complexity, speed, and urgency, periodically falling into domino-like sequences of action across the stage. Joop Caboort’s stark lighting  singes the edges of body parts, outlining jutting elbows, flexed feet, and the occasional rounded spine. Here, the lit shape of many legs creates its own abstraction against a dark background. Veterans Ana Lopez , Kellie Epperheimer and Jessica Tong filled Kylian’s litany of gestures with a kind of passion that propels an intensity of purpose in the movement. The strongly gestural vocabulary of Kylian’s “Sarabande,” the male companion piece to “Falling Angels,” combined the dancers’ auditory impulses with liquid arms in bird-like male mating rituals.

Brooks’ “Terrain” creates whole-stage shape with the entire ensemble, individual bodies spiraling into waves of whole-group action, individual action amplified in the shape of the group. Action/reaction dominates in shape exchanges across body parts from one dancer to another and rippling through the organism that is the ensemble.  Changing shape becomes the catalyst for locomotion. The relentless metronome-like beat of Terry Riley and Todd Reynolds’ music matched the synchrony of formation as the dancers fall into line and break apart, a faint echo from “Falling Angels.” In Brooks’ curvy iteration of the domino effect, a new and different geometry of the human body creates a moving design across space in fluid recombinations, dancers wrapping around each other and spiraling on to the next. The dominant shapes are round and circular, the ensemble morphing its slippery protoplasm into an organic evolution toward humanness.

In “Niebla,” (Fog), Cerrudo expands on his exploration of presence and disappearance with laser projections that create pyramids and planes, the shapes defining the dancers’ existence as they emerge from obscurity into light and vanish into darkness. Cerrudo’s unique take on shape defines the negative space created by the shape of bodies in motion in a way that allows us to see the shape of the space between dancers as part of the visual design. Triangles dominate as the dancers move in, around, and under each other’s negative spaces. 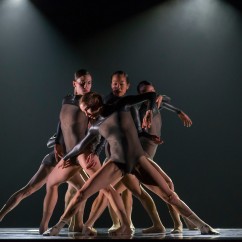 But as tempting as it is to reduce the viewing experience to a singular lens, one of the many strengths of the program is diversity in the use of sound, silence, and music, which each of the four pieces addresses with exquisite sensitivity.

Both “Sarabande” and “Niebla” use Bach to great effect but with entirely different impact. Neither imitates the music. In “Sarabande,” the formality and decorum of Bach’s music serves to create an environment of social norms and expectations against which the dancers struggle, grunt, scratch, scream and hyper-ventilate their all-too-human fallibilities. In “Niebla,” Cerrudo embraces the music—Bach in particular, but the Liszt and Shubert as well—and uses that same elevation of environment to inspire and propel a passionate enthusiasm for living and an appetite for space. The choreography embodies the poetry and beauty of both the music and the urge to celebrate the human body in motion. In Cerrudo’s spatial landscape, dance is the music’s subtext, and vice versa.   Where the music is simple, the dancing is busy, and yet it takes its time to breathe and rest, giving the audience a chance to digest what is happening in the moment. Cerrudo’s choreography finds the drama of the music in an exploration that pays attention to its ebb and flow, its tempos and phrasing, without adhering to its structure, and this is a marvelous achievement!