More than a year after Heather Hartley’s departure, See Chicago Dance once again has a permanent executive director. Not that it’s been a rudderless ship; as interim ED, Surinder Martignetti went above and beyond what she set out to do, leading this humble service organization in times both ordinary and extraordinary. Fortunately, Surinder isn’t going anywhere and returns to her previous role as our illustrious community engagement consultant.

It is with great joy that I officially introduce Julia Mayer as the executive director of See Chicago Dance. Among our readership, I suspect, are many who know Julia already—so, this is perhaps an introduction to a woman who needs no introduction. In any case, after a few months into this, her first foray into executive leadership, the veteran dancer/choreographer and intrepid arts administrator shared a bit of her background with me and what led her to the job.

“I came to dance kind of late,” Mayer said in a phone call. As a pre-teen she was involved in choir, gymnastics and diving. She found dance via the musicals produced by her middle school. “I somehow ended up doing all the dance things. I was in the dream ballet in ‘Oklahoma’ in seventh grade. It wasn’t until ninth grade that I took a proper dance class,” she said.

During high school, Mayer started ballet classes at a Cecchetti studio near her home outside Detroit. “I had to start at the beginning,” she said, meaning she was placed in a level one class with children half her age. “There was something about that that told me that I really cared about this. For whatever reason, I loved being in class. As I look back, there was something about setting aside what was, in the rest of my life, a super self-conscious teenage ego. It made sense to me. I wanted to be there.” 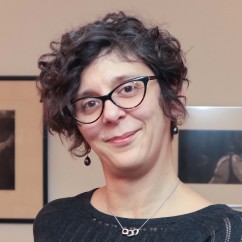 Julia Mayer (photo by Dan Moore) Arriving as a freshman at the University of Chicago, Mayer heard there was a student dance group. “I literally couldn’t find it,” she said. Jan Erkert was teaching dance classes through the Physical Education department, which is how Mayer ultimately connected with the ensemble her sophomore year.

Through Erkert, Mayer learned about popular haunts for modern dancers at the time. She attended weekend classes at Mo Ming while pursuing a degree in linguistics, but it was during her senior year studying abroad in France that Mayer really “tried on” the idea of being a dancer. “I would go to class twice a day and discovered what a rhythm of life would be if I were a dancer.” Immersed in classes and workshops, Paris was also where Mayer began to dabble in choreography.

On returning to Chicago, Mayer spent an additional year training before heading to Urbana to pursue a master's degree in dance at the University of Illinois. Three years later, in 1990, she was back in Chicago to stay.

Like most dancers, then and now, Mayer cobbled together jobs that allowed her to continue dancing. At various points, she was the box office assistant at Mo Ming, an office assistant at a corporate co-op and a production assistant for Loyola Press. One former gig followed in Erkert’s footsteps, teaching dance in the Physical Education department at U of C.

Mayer had no illusions about the realities of a career in dance. “I was really reconciled to the fact that I would be working so I could pay for what I needed to in order to keep dancing,” she said. “I didn’t expect that dance would be my bread and butter, largely because the kind of work I was interested in was experimental and post-modern. I never had the aspiration of getting bigger and more commercial.”

Current dance audiences recognize Mayer as a solo improviser, a shift motivated in large part by a 1998 workshop with Deborah Hay and realized in a studio series called Coffee Dance. “[Hay] largely erases the distinction between rehearsal and performance. You’re practicing the same thing every day, whether there are 500 people watching you or you’re in a studio by yourself. That kind of construct really suited how I approached Coffee Dance,” Mayer said. She reserved Friday mornings at Links Hall when her son started kindergarten as a way to carve out time to commit to dancing, eventually, opening it to the public once a month. These days, occasions to see her perform are infrequent—and special.

Among Mayer’s “day jobs” over the past two decades were roles in philanthropic organizations such as 3Arts and the Richard H. Driehaus Foundation. She has deep ties to programming, having also worked at the Chicago Humanities Festival, Morrison-Shearer Foundation and Museums in the Park.

In many ways, See Chicago Dance seems a culmination of Mayer’s professional experiences, combining programming, philanthropy, community engagement and a long-standing commitment to dancing. But she wasn’t sure at first that it was a good fit.

Mayer was in the room for several of the initial conversations around forming See Chicago Dance. With its identical/non-identical twin, the Chicago Dancemakers Forum, SCD was imagined as a marketing and community engagement initiative (spearheaded in large part by Carol Fox & Associates, a public relations firm that represents several Chicago dance organizations, and with major financial backing from the Chicago Community Trust).

Of one thing, Mayer was crystal clear: she’s not a marketer. It was SCD’s revised vision statement that really drew her to take a second look at the job description. “’To fearlessly inspire an ever-growing inclusive community to share in and spread the power of dance in Chicago.’ …That’s powerful," she said. "That’s what I want to do.”

Motivated by a deep commitment to equity, Mayer saw the vision statement as both a personal and professional challenge. “Would I be ready to fearlessly step into that vision? I started to reflect as the summer started, and things were intense in so many ways, that this might be the chance for me to do some good in the community—putting myself in a position where I had to walk a walk. And learn a lot in the process about communicating around equity and justice.”

--
Want to learn more about what See Chicago Dance is up to? Our next quarterly convening is taking place Oct. 22, during which ED Julia Mayer will discuss takeaways from her five community “listening sessions” and upcoming initiatives planned for 2021. Registration for this virtual convening is free and SCD membership is not required. Click this event link for more details.