One of the most remarkable achievements of this production, staged by De Ávila  for the Oregon Ballet Theatre in 2012, is its relevance for today.

While honoring all the conventions of the 19th-century romantic ballet preserved in the 1841 choreography by Jules Perrot and Jean Coralli and the later, widely used revision by Marius Petipa in 1884,  the story of unrequited love and the vengeful Wilis, set in rural Germany of the Middle Ages, still captivates the imagination and ignites modern sensibilities.

De Ávila and the Joffrey dancers bring the story to life through vibrantly-invested Delsartian mime and dancing that conveys dramatic intention and character specificity with every temps levé and arabesque. Delsarte, a 19-century elocutionist, codified his system of gestures and facial expressions to represent stock emotions and basic ideas that an audience would readily understand. If not handled well, it can easily devolve into cloying melodrama or, even worse, a substitute for truthful acting. The Joffrey dancers found a freshness of discovery in every gesture and combined the “talky” passages of storytelling with lyricism and wholehearted meaning that blended seamlessly with the dancing.

Victoria Jaiani’s portrayal of Giselle stands as a pinnacle of stunning artistry that recalls the great ballerinas who preceded her as she transports a multi-layered and heart-rending Giselle into the future. Her nuanced flirtation with her suitor, Albrecht, the ardent Temur Suluashvili, shimmers with the first blush of love, dances between yearning, coyness, and genuine hesitation, and blossoms into unbridled joy. Her trust in Albrecht’s affection liberates her from the constraints of her mother’s admonitions against too much dancing, and from the jealous possessiveness of Rory Hohenstein’s local would-be boyfriend, Hilarion. 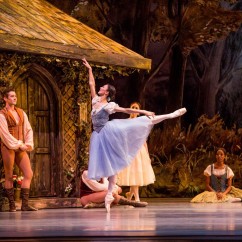 Victoria Jaiani as Giselle, Act One

Of course, we’re rooting for Albrecht, whose ardor transcends his physical attraction to the beautiful Giselle with a tenderness and recognition of everything that makes her uniquely special. His attention to her every breath makes their partnering together scintillate with a chemistry that goes well beyond their impeccably in-sync ballet technique. The depth of their dramatic  investment in each other carries over into Act Two, despite Giselle’s tragic disillusionment over Albrecht’s duplicity.  In Jaiani’s version of the famous “mad scene,” Giselle doesn’t so much lose her mind with disbelief as go into physical and emotional overdrive with the overwhelming realization of Albrecht’s betrayal when Hilarion exposes his betrothal to the Duke’s daughter, Bathilde.

What a bastard, we think, what was he thinking? We at once admonish him for his toying with the innocent Giselle’s heart, and yet Suluashvili’s equally layered Albrecht wants us to believe he simply couldn’t stop himself from falling in love with her, and understandably so, as Jaiani’s Giselle is so achingly lovable. He leaves room in the modern audience’s mind to doubt that he was all that on-board about Bathilde. After all, engagements can be broken, even in fairy tales. A ruinous mistake on his part, yes, but today’s social climate recognizes the complexity of  human alliances and the universal unpredictability of love.

The almost Shakespearean heights of irony brought out in De Ávila’s production pit societal norms against the human heart, something we can all relate to. So genuine is Albrecht’s love for Giselle, we are torn between sympathy for him and disgust, but must ultimately see him as Giselle does: not as a self-serving cad—the essence of his nemesis, Hilarion—but as a tragically-flawed victim of Fate.

When Giselle’s love for him goes beyond the grave, and she absolves him from the evil decree of Myrtha, Queen of the Wilis, so do we, embracing the comfort of the romantic era’s faith in true love and eternal justice, in which the Wilis dance Hilarion to death, and Giselle escapes their militant minyans to take her eternal rest in her grave. All of which abandons poor Albrecht to wander the existential mire of his time. 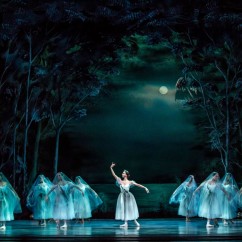 April Daly as Myrtha with the Wilis

When the battalions of Wilis bourée on stage one and two at a time in their ghostly veils and white tulle romantic tu-tus, Myrtha corrals feminist solidarity against the male oppressor. The Joffrey Wilis form regiments of arabesques, criss-crossing lines in perfect single-minded preparation for battle with the enemy: any man who chances into their midst after dark.  Nicole Ciapponi and Gayeon Jung impressed as Myrtha’s right-hand gals, with lighter-than-air elevation and spot-on pointe work.

The emotional vulnerability of Jaiani’s Act One Giselle transforms magnificently in Act Two as Giselle’s spirit releases unfettered rawness, elegant and stripped to the bare essence of her emotional core as she discovers what life after death feels like. Her fleeting runs truly define ethereal, eluding Albrecht’s grasp in a series of magical grand jetés that somehow embody both her loss and her love.

The poetry of Albrecht and Giselle’s final pas de deux taps both dancers’ ability to harness dazzling partnering and petit allegro technique to convey emotional depth. Their adagio is a minor a miracle of somnambulant suffering, conveying in its exquisite simplicity the perfection of her tragedy in a body so pliant, she creates the illusion of being truly incorporeal in his arms. 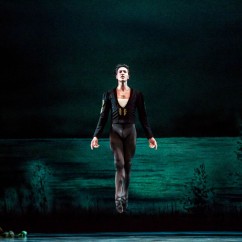 The moment of Giselle’s separation from Albrecht’s grasp simply takes your breath away as the finality of death breaks across the chasm that separates audience from the stage with heartbreaking poignance. If you love ballet, but thought 19th-century romantic ballets were boring, think again. See this!!