The Joffrey Ballet’s Anna Karenina: a brilliant and fresh reimagination of a beloved classic

Yesterday marked the opening of the Joffrey Ballet’s world premiere of “Anna Karenina”, choreographed by Russian ballet choreographer, Yuri Possokhov, and co-produced by The Australian Ballet. As the lights dim in the Auditorium Theatre—located on the newly-named E. Ida B. Wells Drive—The Mary B. Galvin Artistic Director, Ashley Wheater, and Joffrey President and CEO, Greg Cameron appear from the wings. Cameron welcomes the audience to the performance and speaks to the magnitude of the evening’s ballet. As a world premiere, and the Joffrey’s first full-length story ballet accompanied by an original score, “Anna Karenina,” comes to Chicago as a gift. “Chicago is no longer a second city!” Cameron exclaims as the audience bursts into applause. In all of the ways that Chicago is understood by those who live outside the city, and those who live within its limits, but in very different contexts, what does is mean for the Joffrey to take on “Anna Karenina”—a classical romantic novel by Leo Tolstoy that tells the story of a woman caught between her heart and the societal standards of the Russian aristocracy—and reimagine it for Chicago and her dance audiences? With a brilliant new musical composition by acclaimed, Russian composer, Ilya Demutsky, and stunning set and costume design by Tony-award winning designer, Tom Pye, Joffrey’s “Anna Karenina” is fresh and modern, communicating a story that exists between the lines of social class, love and tragedy.

Joffrey’s Victoria Jaiani dances the lead role of Anna Karenina, alongside fellow Joffrey company member, Alberto Velazquez, who dances the role of her lover, Alexey Vronsky. As individuals, the dancers exhibit a vivacity and intricacy in their expressions, jumps and footwork that is stunning and passionate. They each bring these characters to life, and breathe their own narratives in Possokhov’s playful choreography. 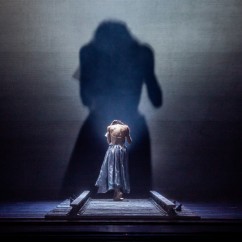 Victoria Jaiani as Anna Karenina. Photography credit Cheryl Mann, courtesy of the Joffrey Ballet. I am particularly drawn to the scene where Anna—after being left by Vronsky and having her rights to motherhood stripped away by her husband, Karenin—decides to throw herself onto the train tracks, committing suicide. Jaiani, hair strewn and disheveled with her arms emerging from her back, bourees around her herself in distress. Accompanied by the haunting and foretelling melody of vocalist, Lindsay Metzger, Jaiani runs and leaps across the stage, distraught. Her movements become more tormented until it becomes clear that she has made the decision to end her pain. Stagehands costumed as railroad workers bring in pieces of the railroad track, nailing in each piece one by one. The set changes and projections appear of the train station, as everyone exits leaving Anna alone to face her decision. Her back arches and arms slowly open as if to surrender, and an oncoming train quickly approaches. The performance ends with a reflective scene where Kitty Shcherbatskaya and her husband, Konstantin Levin—danced by Anais Bueno and Yoshihisa Arai, respectively—share in marital bliss in the countryside. The scene features huge, white sheets that flow in the background and create this tranquil atmosphere fitting for Levin, as well as the audience, to reflect after such a tragedy. The scene is breathtaking, and ends as the lights fade on Arai playfully caressing sheets.

As a result of years of dreaming and conversations between Wheater and Possokhov, “Anna Karenina” is a gorgeous work and huge accomplishment for the Joffrey Ballet. Possokhov’s playful and inventive choreography, along with the vivid projections, light and set design completely absorbs the audience into the ballrooms, countryside, and back rooms of 19thcentury Russian Parliament. In a city that is often referred to as a second city, The Joffrey Ballet’s “Anna Karenina”—the story of a woman who dared to try love and cross the lines of aristocracy, wealth and power for the one she loved—is a special addition to the cultural heart of Chicago.

"Anna Karenina" runs through Feb. 24 at the Auditorium Theatre, 50 E. Ida B. Wells Drive. Tickets start at $35, with Hot Deals available through See Chicago Dance. For more information, click the links below or visit joffrey.org