Yum! Just as Joffrey dancer Fernando Duarté’s delectable Mother Nutcracker blithely cracks walnuts atop her house, Joffrey Ballet’s 2022 edition of its production cracks open hallowed traditions of the best-known, longest-lived and most universally-performed ballet, dating back to its premiere in St. Petersburg, Russia in 1892.

This year’s Nutcracker marks Joffrey Ballet’s second Nutcracker in its new home, but it’s the first time that choreographer Christopher Wheeldon has seen it on the Lyric Stage. He travelled to Chicago during rehearsals last week for fine-tuning.
The production had to adapt from the sprawling Auditorium Theatre proscenium to the smaller Opera House stage. Spatial compression has brought sharper focus to the stage action and enhances the overall visual impact of the production, nothing short of magnificent!

A sense wonder, magic, and community solidarity lit opening day with excitement after a long period of hardship for most in-person performance companies, their artists, their venues, and their audiences.

One could feel the excitement in the crowd, from the oldest ballet aficionados to doting grandparents and parents with whole families decked out in their holiday finest as they waited in the Opera House’s elegant art deco lobby for access to their seats.
The Opera House, palace-like in its red velvet and gold-trimmed interior, evokes a past when going to the ballet was like entering the Royal Court of Russian Czar Nicholas II. A fair number of little girls showed up for the opening performance in pink tulle skirts, pink tights, and pink Maryjane shoes.

This writer has to confess to being swept up in the momentousness of the occasion, it being my first in-person dance event since Covid began. But the excitement wasn’t limited to those of us in the audience.

On stage, you could feel the dancers’ heightened awareness in the crispness of their dramatic interactions and the general expansiveness their bodies brought to Christopher Wheeldon’s choreography. As an audience member returning to live stage performance, I was struck by the unique osmosis across the footlights between performing artists and audience, and by the three-dimensional quality of energy, gesture, and flow that cannot be replicated virtually, even with the best technology.

This year’s production intensified my appreciation for Wheeldon’s sensitivity to the elitism of the original, czarist-era production, with his focus on the economic disparity between the working class and the privileged in 1893 America, and his reimagining of E.T.A. Hoffman’s original story of childhood fantasy and sexual awakening. 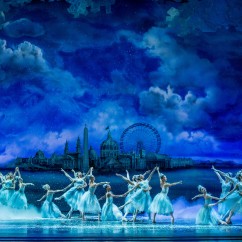 One couldn’t help noticing parallels between Wheeldon’s portrayal of the social stratification and deprivation of 1893, four months before the opening of Chicago’s World’s Fair, and the unique historical moment we are facing on many fronts today.

The Joffrey dancers are consistently superb actors, blending body language, technically challenging choreography, and dramatic intention in seamless service to storytelling. This is especially wonderful in Wheeldon’s staging of the opening scene. Like a masterful playwright, he lays out all the contrasting elements that will drive the scenes and characters that come to life in the story he is telling—rich and poor, honest and dishonest, generous and greedy, childhood wonder and adult reason.

Dylan Guttierez as The Great Impressario embodies the kindness, generosity, and magic at the center of the production. He anchors the drama of both Act I and Act II with heart and soul, and lovingly partners the exquisite Jeraldine Mendoza, who doubles as Marie and Franz’s sculptress Mother, and Queen of the Fair.

Hyuma Kiyosawa, doubling as Peter, the Impressario’s apprentice in Act I and the Act II Cavalier Prince, flirts convincingly with teenage love for Marie while delighting with the spot-on phrasing and shining technical edge of his dancing.

Yumi Kanazawa is radiant as big sister Marie. Her unaffected portrayal of the child/woman in adolescence feels authentic throughout. The joy coming out of her total being on stage infused the choreography with extra sparkle. 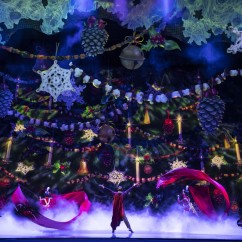 Edson Barbosa’s virsatility brought great fun and comic relief to his roles as Rat Catcher and Rat King, contrasting with his steamy and seductive Arabian. No mere prop to partner Victoria Jaiani’s exquisite extensions, lifts, and turns, his every move integrated with hers in ardent love and mutual devotion.

Basil Twists’ wonderfully animated puppet rats transformed into a human-size militia in the battle scene and provided comic relief throughout. Wheeldon didn’t stint on drama, either, in his skillful pacing that shifted mood between levity, romance, burlesque, and high-stakes suspense.

The corps was never better than as the workers in Act I, who arrive at the sculptress’s cottage for a pre-Christmas celebration. The folk-esque group dances in the “party scene” were filled with gesture specificity, each worker a distinct personality.

Of note was the klezmeresque dance music of the on-stage trio of accordion, fiddle, and clarinet.

This is a nit-pick, but because the Joffrey dancers are so superb, they’ve set their own standard very high, and we’re spoiled by their artistry. Their opening day Act II ensemble work, while generally well-executed, sometimes lost intention and focus of the choreography. As with any good wine, this will no doubt breathe and evolve in richness now that the bottle is uncorked.

The world of this Nutcracker emphasizes the power of love to sustain us through hardship, with a feel-good affirmation most Nutcracker audiences are looking for.
Wheeldon’s Nutcracker, commissioned by the Joffrey in 2016, embodies a long tradition of Nutcrackers dating all the way back to the ballet’s 1892 premiere in St. Petersburg, Russia, choreographed by Marius Petipa, with an original score by his long-time artistic collaborator, Pyotr Ilyich Tchaikovsky.

Wheeldon’s choreography “hears” the texture and emotional nuances of Tchaikovsky’s score with an ear to its integral role in defining characters, relationships, and whole scenes to further the storytelling and energy of the dramatic through line. This includes a rich tapestry of longing, despair, terror, irony, wonder, and ultimately, hope. It is the last, hope for a better tomorrow, that pervades this year’s Joffrey Nutcracker more than ever!

Don’t miss the delicious concoction Joffrey Ballet Chicago has delivered to its new home at the Civic Opera House.