“Happy families are all alike; every unhappy family is unhappy in its own way.”

Opening this Wednesday, Feb. 13th, and running through Feb. 24th at the Auditorium Theatre, The Joffrey Ballet’s world premiere of Leo Tolstoy’s "Anna Karenina," choreographed by Yuri Possokhov, is co-produced with the Australian Ballet, which will stage the production in 2020.

The brilliance and complexity of Tolstoy’s work, published in 1878, is daunting, spanning gargantuan themes ranging from hypocrisy, jealousy, faith and marital fidelity, to the clash between the agrarian connection to the land and urban lifestyles of the aristocracy, government and social reform, and the looming advent of industrialization. How does that translate into a two-act ballet that clocks in at just over two hours?

“It was a matter of Yuri sitting down and finding a way to tell the story, simplify the libretto,” Joffrey artistic director Ashley Wheater said in a recent phone conversation with See Chicago Dance. “I have always loved the story, and I know Yuri. He knows the book.”

Possokhov began his career and rose to the rank of principal dancer with the Bolshoi Ballet, one of the world’s oldest ballet companies, steeped in the traditions of Imperialist Russia.

Wheater sees Possokhov’s "Anna Karenina" as the pinnacle of the choreographer’s artistic achievement to date: “It encompasses all of the best of him,” he said. Possokhov is a classicist who uses the language of ballet, “but we see ["Anna Karenina"] now in a contemporary version.”

“At its core,” said Wheater, “there is everything about our humanity in that book…in all its beauty, complexity and darkness.” How we honor our humanity, ourselves, our society, our marriages, are the essential questions the story asks. “You can’t help falling in love,” Wheater acknowledged, referring to Anna’s illicit affair with Vronsky, “but what is the price paid?”

Wheater and Possokhov, whose friendship and collaboration go back to their days as dancers with the San Francisco Ballet, have culled a creative team from among the world’s best. Award-winning Russian composer Ilya Demutsky, Emmy winner and Tony nominee designer Tom Pye, Possokhov, Russian dramaturg Valerie Pecheykin, Wheater, and, not least of all, the inspired and inspiring dance artists of the Joffrey Ballet have all united in what Wheater calls “a team that was there for each other.”

Once the team nailed down the libretto, the production found its rhythm, and the choreographer took off “with unapologetic passion.”

The libretto parallels the lives and loves of drastically opposite couples—Kitty and Levin, and Karenin/Vronsky and Anna, the one building something that lasts a lifetime, the other sowing nothing but devastation.

Rehearsing the ballroom scene several weeks ago, Possokhov asked the dancers to “meet the music more fully,” emphasizing the score’s sharp accents and dissonance. The formal standard waltz steps and rigid, aristocratic bearing of the dancers give a feeling of the regimentation of class distinction, but unexpected tilts, dips and a passionate arm tossed across the chest on unaccented off-beats create a sense of impending drama. 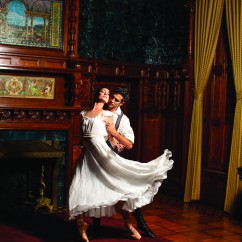 Victoria Jaiani and Alberto Velazquez at the Driehaus Museum, Photo by Cheryl Mann Both vanity and vulnerability characterize Anna’s entrance, danced by the exquisitely pliable Victoria Jaiani, spiraling into the moment of recognition with Vronsky, danced by Alberto Velasquez. The expansive drama of long lunges and high lifts captures the rapture of their encounter, even as the repetition of the musical motif portends their destiny with a hint of doom.

Joffrey dancer Fabrice Calmels, recognizable to Joffrey fans for his towering presence and commanding performances, dances the role of Karenin, a wealthy government bureaucrat and Anna’s much older husband. (Miguel Angel Blanco and Temur Suluashvili alternate in the role.)

“In public, he likes to control his image,” Calmels explained. “Karenin doesn’t want to show his emotions. He doesn’t see his wife’s despair. He thinks he can control it…by playing the role he was taught to play in life.” Calmels sees Karenin, and the story of "Anna Karenina," as demonstrating how we risk safety when we venture outside of our placement in the environment we inhabit.

Possokhov has given Karenin’s movement a contained, controlled tension, uptight and at odds with itself, as reflected in Demutsky’s diabolically complex music for this character. “The scene in Parliament is very Stravinsky-like,” Calmels says, adding, “the meter is changing all the time!”

Calmels deliberately postponed reading the novel and purposely removed himself from watching too much of the rehearsal process because he didn’t want any personal feelings to impose on the choreographer’s vision of the character. “It is very personal for me,” he said.

After a back surgery, Calmels found himself looking at the craft differently. “What I’ve discovered since surgery is that I was able to perform at a very high level in a different way,” he said, balancing the technical balletic demands of the choreography with the emotions of the character to “be a true storyteller.”

Calmels praises the Joffrey Ballet’s pioneering spirit in mounting new productions. “Ashley takes risks,” Calmels said, “which is very challenging,” in the best of ways, adding that Wheater believes the audience is hungry for story ballets.

Giving the Joffrey dancers exciting material to sustain their need to grow as artists is one of Wheater’s objectives as artistic director. "Anna Karenina" has brought him to “an all-time high of respect and love” for the company, said Wheater, who is “proud and thankful for this moment.”